The ESB Group of Alabama’s comprehensive infrastructure upgrade strengthens technical capacities for in-house AV and live broadcast, including streaming services for the social distancing era and beyond

The COVID-19 put a temporary halt to AV integration projects across most verticals, with houses of worship among the most affected. As luck would have it, The ESB Group of Alabama wrapped a large installation at a Birmingham-area church just as lockdowns took shape. Furthermore, the key players had an unexpected ace up their sleeves, as the design included technologies to support live streams for worship services.

Located in Hoover, Alabama, Hunter Street Baptist Church is located in a busy suburban neighborhood outside of Alabama’s largest city. The church moved to a 2000-seat worship center in 2000, and purchased a used mobile production truck several years later to support broadcast operations. This truck was gutted and equipment was eventually used to be a on campus control room.

While the technology was in fine shape at the time of purchase, the SD-SDI video systems were already aging at that time. Today, the systems are considered fully antiquated in comparison to the formats and technical infrastructure that drive today’s operations.

Furthermore, equipment was growing harder to maintain. As an example, many of the boards in the circuit-based components were beginning to fail. Every Sunday, personnel would have to white-balance the cameras several times just to maintain the correct image color. Additionally, the image quality was not ideal for image magnification or live streaming.

“This was simply a system that reached end of life,” said Patrick Sobers, Design Engineer for The ESB Group. “They had a very good SD-SDI system with high-end cameras, but it was still an antiquated format with technical limits. They now have a full 1080p system with the ability to unlock 4K capability with a just a few updates.” 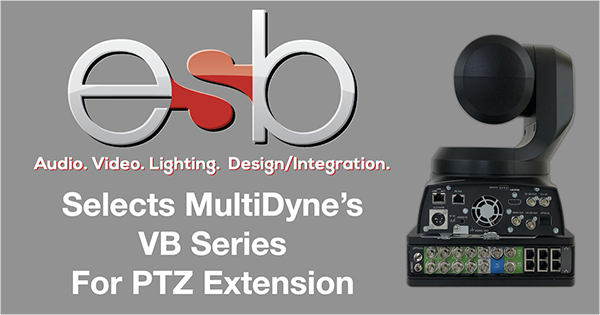 Fiber Is The Future

The project required a nearly complete rip-and-replace to modernize the infrastructure. While the layout and furniture was retained, virtually everything else everything went through a wholesale change. This included a new control room, a new camera system in the worship center, and a high-speed fiber-optic backbone to move video and audio through the facility.

“We retained the general ergonomics to simplify matters,” said Sobers. “For example, we kept the layout of the shading area the same, and just made some modifications to the openings. That allowed us to sink the new RCPs into the counter to create more efficient operating environments for the shaders.

“We completely gutted the control room so we could start fresh,” he added. “That meant removing a lot of five-wire and triax. In fact, we replaced all of the existing triax with new fiber.”
The integration team installed 48 pairs of single-mode fiber between the control room and front of house, and 24 pairs of the same between the control room and a pre-existing audio room that houses most of the worship center infrastructure. MultiDyne fiber transport systems are used throughout the church for video, audio, data, genlock/sync, and Ethernet transport.

“Single-mode fiber offers much greater value than triax in a modern AV infrastructure,” said Sobers. “The single-mode fiber is all 12G-ready, which eliminates any bandwidth problems upfront. We also have the 12G transport capability built in with the MultiDyne systems between the cameras, the control room and the worship center.”

The ESB Group, in conjunction with the Production Team from Hunter Street, selected seven Sony cameras for the sanctuary, including four HDC-3100 camera systems and three BRC-X1000 PTZ cameras. The cameras are set up to operate in 1080p for now, and upgradeable to 4K with a simple software update. Those cameras were matched, respectively, with four MultiDyne SMPTE-HUT transceivers, and three MultiDyne VB-3917 LightBrix fiber transport products.

Two of the HDC-3100s are positioned permanently in the FOH booth, pointing dead center at the stage; the other two are positioned at the far left and right wings of the worship center. Two of the PTZs float from week to week to capture the orchestra from varied points of view, while the third retains a permanent position on the balcony’s edge.

“We have a 700-foot run from the HDC-3100s to the control room, and the SMPTE-HUT moves camera signals over fiber,” said Sobers. “These are simpler systems that we basically use to transport live video signals, the HUTs convert the signals as required as they move between the cameras and the CCUs.”

The SMPTE HUT transceivers automatically paired to HDC-3100s with a couple of simple dipswitch settings that were done at the MultiDyne factory. From there it was as simple as rack mounting the HUT, connecting the fiber and powering the camera through the system.

“We like how the HUT allows us to inject power on the remote side of the camera position,” said Sobers. “That way we don’t have to bus power that entire distance, and we can use dry fiber throughout the building. That makes it easy to patch and removes the need to establish a bunch of expensive legacy connectors everywhere. If anyone needs to make a new drop, we just add some inexpensive single-mode fiber, and they move the camera to that position.”

The MultiDyne VB-3917 throwdown units provide more flexibility for the floating PTZ cameras, and in addition to video, they carry all the control signals required for PTZ POV systems. Sobers explains that they transport 12G from the camera, and 3G video back to the camera positions. From there, the operators backfeed video to the sanctuary from the control room.

“The VB-3917 boxes move this entire complement of signals over 12G to an Aja Kumo 6464-12G router, which sends everything to a Ross Carbonite Ultra HD 2ME production switcher,” said Sobers. “They have Genlock back and forth, and when those lights are active we know there is a video flowing. And we can also monitor all this through the connected openGear dashboard.”

Sobers opted for the Ethernet feature on the MultiDyne VB-3917 to maintain simple connectivity with the control room. In the case of a network failure, we’re not relying on a switch to be enabled to maintain control.

“The control signals just comes though the VB-3917 and then move back to the control room,” he added. “There is a great deal of flexibility now for moving high-resolution video content and control data through the facility,” added Sobers.

The Carbonite system is one of the elements that Sobers referenced as quite operational for 4K today, though will be with some minor updates.

“They purchased the 4K license, so they can make those updates whenever they want,” said Sobers. “For now, they only needed 1080p HD capability ready to go.”

The Carbonite system includes four multiviewers, with positions for a TV shading position, and two graphics stations in the worship center for front of house and the choir. Sobers explains the latter as a dedicated prompter position used exclusively for a local choir confidence monitor.

“We keep choir graphics fairly separate from the rest of the infrastructure, and centralize that operation to a specific 80-inch monitor.”

The control room also features a new DiGiCo S21 48-channel audio mixer to handle the broadcast remix. That position is located in the back row of the control room, along with a broadcast graphics station running ProPresenter 7 and a workstation with Vimeo Livestream Studio software. The latter is used to transform computers into production control rooms for live streams, and allows the operator to input multiple feeds, graphics and master audio received from other sources in the control room.

The Studio 6 system has established a foundation for streaming direct to Facebook, Vimeo and YouTube – an important service given the multi-week lockdown that is still in place as of press time. Sobers added a Blackmagic Ultra Studio 4K encoders for ingestion to the streaming network.

“They have an ISP relationship in place to handle the video signal from that point, and there was no in-house network reconfiguration required” said Sobers. “Our work stops at the encoding stage, and the content delivery experts take care of things from there.”

Some equipment from the previous system was retained, including the existing IMAG screens. The church continues to use its existing ProPresenter media and lyric presentation software from Renewed Vision as well.

“It’s ProPresenter all the way for them,” said Sobers. “All three graphics positions – broadcast, front of house and choir – use ProPresenter 7. These stations all interface with Blackmagic Ultra Studio devices and they take advantage of the new alpha channel built into the software for the broadcast feed.”

Lighting was also not touched, for the time being. “The church has a very good theatrical set already,” said Sobers. “Their next stop is a transition to LED, which is a project we are entering the design stage on. We see that as the next major upgrade.

“The spirit of this design and integration project is really about being proactive on their behalf, and helping them futureproof for opportunities that lie ahead,” continued Sobers. “By enabling 12G throughout the facility, establishing a robust fiber backbone and upgrading their streaming capabilities, the Hunter Street Baptist Church is set up for high-quality broadcast and in-house AV capabilities well into the future.”

This article can be viewed in the August issue of Sound & Communications publication – https://edition.pagesuite.com/html5/reader/production/default.aspx?pubname=&edid=95ff2288-e6cd-40b7-9b67-23aa2c214183&pnum=40