The majority of the global economy is experiencing growth. IMF projections of world output growth in 2017 have increased from 3.5% forecast in April to 3.6% as of October. The IMF forecasts 2.2% growth in advanced economies in 2017, an increase from 2% in April. Similarly, for developing and emerging economies, the IMF forecast increased from 6.6% to 6.8% for 2017. This positive outlook is spurred by increased consumer spending and business investments as confidence increases, however growth in some developed nations remains weak in the medium-term due to low inflation and slow wage growth. Commodity prices, especially oil, have made little progress in gaining momentum globally, impacting oil-exporting nations. The IMF has warned nations not to get complacent with recent growth figures, as policy uncertainty and political tensions could threaten progress in certain regions making sustainability difficult.

Chart 1 shows that oil prices have declined since 2014 and have not been able to recover to their previous level, staying around the $50 mark. Analysts have forecast that oil prices will remain around the US $50/ US $60 mark with only modest increases in the foreseeable future. The OPEC agreement to cut production has restricted growth in the oil-exporting Gulf states. This agreement is due to end in March 2018 – however, many oil-exporting nations support an extension, including Russia. Saudi Arabia has also made statements that it is willing to agree to an extension, however this is also dependent on US oil production.

Oil prices have declined since 2014 and have not been able to recover to their previous level, staying around the $50 mark - IABM Global Business Environment Click To Tweet 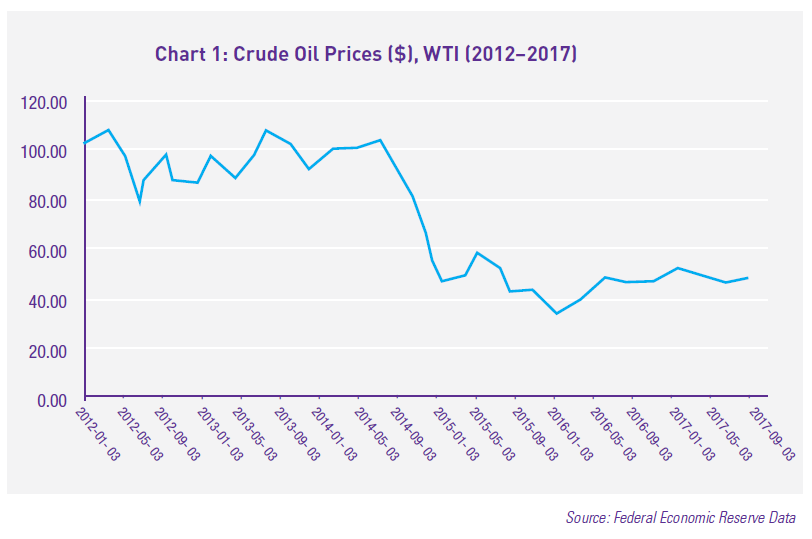 The US achieved an annualized rate of 3% growth in the third quarter, outperforming the prediction of 2.5%, despite the damage from hurricanes Harvey and Irma. This was largely due to steady spending from consumers and businesses.

Consumer spending grew by 2.4% while non- residential fixed investments by businesses grew at 3.9%. The impact on GDP of the hurricanes is still being assessed, however the US labor department recorded a monthly fall in employment of 33,000 jobs in September – the first drop in seven years. Due to this being a hurricane-related anomaly, the US economy has still performed well with stock markets hitting record highs. The IMF has increased its 2017 growth forecast for the US, from 2.1% to 2.2%, primarily due to increased spending and investments. However, according to the IMF, policy delays due to lack of agreement between the White House and Congress will hinder the recent fast-paced growth that the US has been experiencing.

The Trump administration continues to push ahead with tax reforms to boost business growth and employment. The plan would see the corporate tax rate cut from 35% to 20% and allows a one-time repatriation on non-US earnings. For individuals, the seven existing income tax brackets have been reduced to three: 12%, 25% and 35%. The bill is estimated to be US $15.1tn over a decade, however there is little information on how the tax cuts will be financed. Despite these challenges, some businesses in the US including AT&T and UPS, remain confident about the tax cut, expressing confidence in earnings and extra cash for future investments.

According to Eurostat, the UK experienced growth of 0.4% in the third quarter, an annualized rate of 1.5%, a slight increase from 0.3% in the second quarter. This growth was driven by the dominant UK service sector with manufacturing also improving in the third quarter – construction has declined for two consecutive quarters. Brexit negotiations continue as the March 2019 departure draws closer, however there has been little progress on vital issues such as trade agreements and migration. 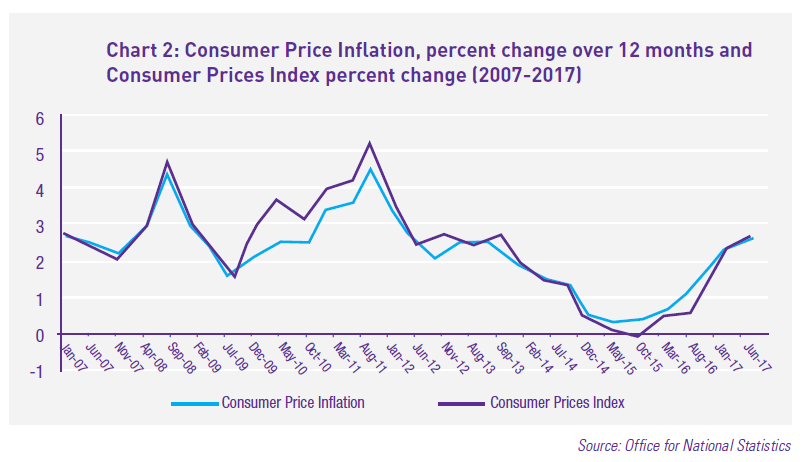 Inflation has increased, shown in Chart 2, with the Consumer Prices Index (CPI) hitting a five-year high at 3% in September following the slump of Sterling after the Brexit vote, dampening consumer spending. Mark Carney, Bank of England governor, predicts further increases to around 3.2%. Moreover, inflation has outpaced wage growth, which increased to 2.1% in September. Due to rising inflation, the decision was made to raise interest rates for the first time in a decade – from 0.25% to 0.5%. Mark Carney has said that the forecasts of 1.7% growth for the UK economy over the next few years would require “about two more interest rate increases over the next three years”.

Brexit has caused the UK economy to grow at a slower pace, increasing inflation and discouraging business investment, as the future remains uncertain. At the time of writing, Brexit negotiations are entering their sixth round. Brussels has given the UK an unofficial deadline of three weeks to offer an amount for the ‘divorce’ settlement bill. Following this, officials have said that progress can then be made on the transition deal proposed by the UK and other important issues.

Brexit has caused the UK economy to grow at a slower pace, increasing inflation and discouraging business investment, as the future remains uncertain - IABM Global Business Environment Click To Tweet

The Eurozone has seen a good year so far with growth continuing into the third quarter at 0.6%, an annual rate of 2.5%. The European Central Bank (ECB) has increased the growth forecast for the Eurozone in 2017 to 2.2%, with unemployment at 8.9% in September – the lowest rate for nearly nine years. However, inflation remains below the 2% target at 1.4%. France contributed to this strong growth as household consumption and business investments increased, indicating an improvement in confidence – growth in the third quarter was 0.5%.

Germany raised its growth forecast to 2% for 2017. Spain also performed well in the third quarter at 0.8% – annual growth for 2017 is forecast at 3.1%. Political tensions in Catalonia – voting for independence from Spain – have done little to diminish growth prospects, with predictions that Spain will be one of the best performers in the Eurozone. The ECB will continue to reduce its policy support as economic recovery continues with bond buying reducing from €60bn per month in 2017 to €30bn from 2018. Eastern Europe shows significant improvements in growth, with the IMF increasing the forecast for ‘emerging and developing Europe’ to 4.5% this year.

The IMF has increased growth forecasts for Asia- Pacific to 5.6% as the region continues to lead growth and global demand remains strong. This is also due to key export markets, Europe and the US, performing well. China grew at an annual rate of 6.8% in the third quarter, on target to meet 6.5% in 2017. The economy continues to rely on debt-fueled investment, which creates long-term risks. However financial regulators have tightened policy this year.

The IMF has increased growth forecasts for Asia- Pacific to 5.6% as the region continues to lead growth and global demand remains strong. This is also due to key export markets, Europe and the US, performing well - IABM Global Business… Click To Tweet

Growth in India has been revised down by the IMF, from 7.2% to 6.7%, due to demonetization in 2016 and the introduction of new taxes. Japan continues to face challenges with debt, an aging population and low inflation. Despite these challenges, Japan’s forecast for 2017 has been increased by the IMF to 1.5% from 1.3%, due to the pickup in exports and stronger consumer spending. There have been initiatives from the government to get more women into the workforce to encourage dynamism and attract foreign investment.

Latin America continues to progress gradually, with Argentina, Brazil and Chile showing significant recovery. Economic activity in Colombia is slowing down while Venezuela is contracting for the fourth consecutive year and is at risk of hyperinflation. Mexico remains stable despite the uncertainty about future trade relations with the US.

Commodity prices have contributed to growth, especially copper, however these prices remain volatile. Although domestic demand is picking up in a few nations, the region continues to face political and policy uncertainty. Russia achieved 2.5% annualized growth in the second quarter as the manufacturing and service sectors improved, signaling stronger demand.

We report the latest swings in major economies’ exchange rates and provide an outlook for their possible movements over the coming months. Exchange rates are highly unpredictable but it still is useful to plan and attempt a forecast based on current macroeconomic trends.

The four major drivers of turbulence in foreign exchange markets have been: 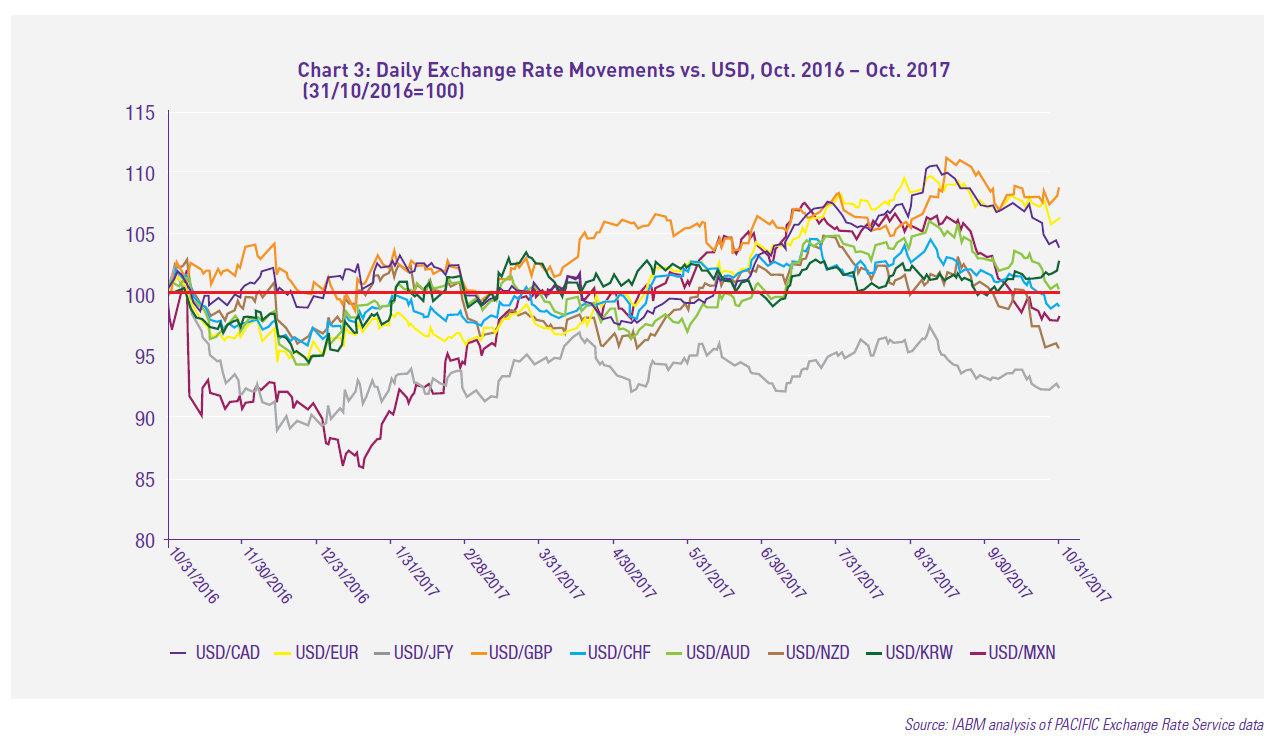 The Euro, British Pound and Canadian Dollar have remained relatively strong for the last quarter against the US Dollar while other currencies, including the Japanese Yen and Mexican Peso, have depreciated. The US Dollar has done well due to the better-than-expected economic growth, however policy uncertainty and delays present challenges for the currency.

The Euro has performed well throughout the year, seeing highs against the US Dollar and British Pound. Political stability and strong economic performance have contributed to the strength of the Euro. However, the Euro remains under pressure from low inflation across the Eurozone and the European Central Bank (ECB) stimulus program keeping interest rates low.

Following the Brexit vote, the British Pound fell to an all-time low, however the recent strength of the British Pound is due to the prospect of speedier Brexit negotiations - IABM Global Business Environment Report Click To Tweet

The Mexican Peso is considered to be highly sensitive to market sentiment and oil prices – Mexico is one of the largest oil exporters in the world. Moreover, its relationship with the US drives movement in the currency, especially since the election of President Trump. The Mexican Peso saw huge depreciation against the US Dollar following Trump’s election, largely due to the uncertainties around NAFTA. As NAFTA talks proceed the Mexican Peso has gained momentum against the US Dollar, but remains volatile as the future trade relationship continues to be undecided.

The Mexican Peso is considered to be highly sensitive to market sentiment and oil prices... its relationship with the US drives movement in the currency, especially since the election of President Trump - IABM Global Business Environment… Click To Tweet