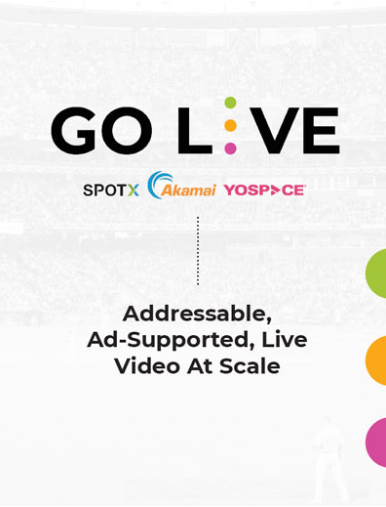 Live and linear viewing online, or simulcast, is growing as virtual multichannel video programming distributors (vMVPDs) and broadcast services such as CBS All Access and ITV Hub gain popularity. But they face competition for ad spend from major internet companies, while a new generation of viewers are coming through that have grown used to ad-free video experiences, leading many to question the viability of traditional TV ad models.

To remain competitive and maintain ad revenues, service providers are looking to reduce ad loads and boost ad values with addressable (or targeted) ads inserted dynamically into the video stream. Client-side solutions are frequently used to do this. However, client-side ad insertion has several significant problems:

• It is harder to swap out ad ecosystem components because the client-side apps are dependent on them.

Server-side ad insertion (SSAI) fixes many of these problems:

• Video experience is much smoother.

• It is much harder for client-side ad-blockers to remove the ads and for malware to usurp them.

• Server-side apps are less fragmented and easier to maintain.

• Ecosystem components are easier to swap out because all ad system dependencies are on the server-side.

Scaling targeted ad insertion is challenging. SSAI and programmatic ad platforms (or ad decisioning systems (ADS)) work together to automate the buying and selling of ad spots, making large numbers of ad transactions possible in a short period of time.

Even with a streamlined SSAI solution, there are still unique challenges in live video situations, where unexpected ad breaks may force the ADS to resolve millions of ad requests in as little as a second or two. If the capacity threshold of the ADS is reached, it may stop filling ad requests completely, causing many ad slots to go unfilled and thus losing potential revenue for the video provider.

To solve this problem, the SSAI system can begin to send ad calls long before the break, ensuring that the ADS has time to resolve all ad requests. This strategy is called prefetching, and there are three main approaches:

1. While a current ad break is playing, the SSAI system can prefetch ads for the next scheduled break.

2. The SSAI system can prefetch ads for a scheduled break at a predetermined time before the break starts.

3. When a viewer first starts watching a live stream, the SSAI system can fetch ads for a contingency ad pod to be used in filling unscheduled ad breaks.