This article originally appeared in the IABM Journal, issue 105 which is available to view online here

IABM has organized and/or attended a number of events in the MEA region over the last few months. While broadcast and media development in the region is still hindered by low broadband quality and poor payment infrastructure, multi-platform delivery and OTT are nonetheless on the rise, following the worldwide trend towards a direct-to-consumer model. IABM participated in the 19th edition of the ASBU TV & Radio Festival and convention which took place in Tunis between 26 and 29 April 2018. 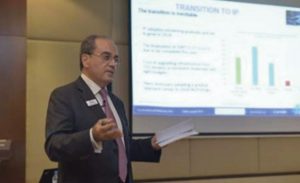 RTS Intercom Systems held an official product launch event for its ODIN OMNEO digital matrix in Dubai Media City on 8 May 2018. During the event, IABM presented an overview of the latest updates in the migration to IP technology, highlighting some of the benefits of this migration, including efficiency, cost-effectiveness, total cost of ownership and interoperability. The presentation also underscored the importance of standards for audio over IP, namely AES 67 and AES 70, easing the route to IP-based workflows.

IABM participated in the 19th edition of the ASBU TV & Radio Festival and convention which took place in Tunis between 26 and 29 April 2018.

ASBU (Arab States Broadcasting Union) has moved the festival to a new venue in the capital Tunis. The new location, Culture City, is a more convenient and better organized location for the event. This shows ASBU’s interest in supporting and strengthening this event for future years. Speaking about the event, Abdelrahim Suleiman, Director General of ASBU said: “The annual festival aims to contribute to the development of Arab radio and TV production and improving its quality so as to meet the needs of member corporations. The festival aims also to identify and encourage innovative and meaningful trends in radio and television production in order to develop Arab creative energies in this field.”

The Festival included TV and radio awards programs to recognize and celebrate creativity in the region, together with technical and creative workshops and a TV and radio equipment exhibition with 90 participant companies. 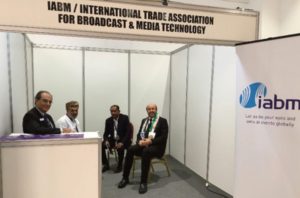 On 26 April, ASBU held three panel discussions. The first session, entitled IP Live Studio, covered the IP Protocols and the deployment of IP technology in live studio operations. The second session covered UHD and HDR. The last session was about Digital Radio Broadcasting. IABM delivered a presentation during the first panel about IP in live and remote video production and highlighted several projects which have been implemented using IP technology in live productions.

IABM OTT Event – OTT: are all the tools available for the right viewer experience?

As media consumption is steadily shifting from conventional linear TV to the Internet, OTT and multi- platform delivery continue to disrupt traditional broadcasting. OTT offerings are on the rise as broadcasters and media companies are increasingly launching direct-to- consumer services worldwide.

In the MEA region, OTT penetration is still at a low level due to limitations in broadband quality and poor payment infrastructure. It is however clear that OTT will grow in the region both as a standalone offering and as part of a Pay-TV platform.

In the MEA region, OTT penetration is still at a low level due to limitations in broadband quality and poor payment infrastructure - IABM MEA Director Hassan Ghoul Click To Tweet

IABM organized an OTT conference on 9 May 2018 in Dubai, to examine the tools currently available to provide the viewer experience that will accelerate the growth of OTT in the MEA region. The conference was sponsored by IABM members ATEME, Dolby and Interra Systems.

The conference included a number of presentations which were followed by an interview with a regional media company which has recently launched an OTT platform. The presentations were delivered by IABM, ATEME, Interra Systems and Dolby.

IABM presented an update of the latest market data covering consumer viewing trends, media business trends and buying trends from IABM’s most recent survey conducted prior to the NAB Show. The IABM presentation concluded with data about OTT offerings worldwide.

ATEME’s presentation, delivered by Ali Amazouz, Head of Solution Engineering, MEA, covered the application of Artificial Intelligence & Machine Learning to optimize OTT delivery. ATEME has developed its own video quality assessment which led to the definition of a perceptual video quality metric called the AQI or ATEME Quality Index, based on machine learning. The information collected by the system is used by the machine-learning engine to predict and analyse data.

Interra Systems presented guidelines for ensuring accurate, reliable and quantifiable QoE for OTT services. Market data clearly indicate that, for OTT services, a high-quality experience is a key factor for success – crucial to growing the number of subscribers and encouraging loyalty. The quality of content should be monitored at every stage of its lifecycle from acquisition, to preparation, to distribution and finally to consumption by the viewer. Interra’s presentation was delivered by Kanishka Tongya, Sales Director, MEA & APAC.

The quality of content should be monitored at every stage of its lifecycle from acquisition, to preparation, to distribution and finally to consumption by the viewer - Kanishka Tongya, Sales Director, MEA & APAC at Interra Systems Click To Tweet

The final part of the event included an interview with Tony Saab, VP Products & Content, Intigral. Intigral has recently launched an OTT service called Jawwy TV across the MENA region. Tony outlined the main reasons for Intigral starting its OTT service as a platform which will allow content from various providers to be streamed on the service.

Intigral currently has a large number of subscribers through its association with STC, the Saudi Telecom provider, and it intends to use the new service to reach viewers in other countries of the GCC and MENA region.

Tony pointed out the generational differences between the viewers of traditional broadcast services and the viewers of OTT services. Young viewers are watching more media on the internet than on conventional broadcast TV and most of these viewers don’t even own televisions. It’s hard to keep up with the many devices and apps people now use to watch shows and OTT platforms are the best way to reach these young viewers.

It’s hard to keep up with the many devices and apps people now use to watch shows and OTT platforms are the best way to reach these young viewers - Tony Saab, VP Products & Content, Intigral Click To Tweet

Tony explained the solution chosen by Intigral and the business model they will apply to generate revenue.

More than 50 delegates attended the OTT conference. The feedback received from the delegates, as well as the sponsors, was very positive. The event was interactive and created a good opportunity for the members to network with the customers. In particular, the interview with Tony Saab was very interesting and resulted in several follow up questions from the audience.