“IBC is a great venue to launch new features that add functionality to our product line-up, such as the LiveView option for our TR-XT control system, or support for the new Absolute Navigation Interface (ANI) incorporated into SmartPed,“ says James Eddershaw, managing director of Shotoku UK. “But we are also sensitive to the fact that our customers always want to see our core systems that have been fully proven in the field and adopted by some of the best-known broadcasters and the most demanding environments all around the world. We’re happy to have a balance of brand-new products mixed with tried and true at this year’s Stand.”

Adjustments On-the-Fly
As part of the TR-XT extended automation interface (ECIPlus) the system now accepts shot recall commands from main and backup automation systems as well as complete joystick control, so on-the-fly adjustments to camera positions, even while under computer control, can be achieved from an external automation or face tracking system.

Studio No-Go Zones
TR-XT now also supports the creation and management of operational zones for free roaming (SmartPed) and rail-based (SmartRail) cameras such that safe areas, and no-go zones, are always enforced. A different set of no-go zones can be created for each studio layout and stored within the Show definition of the TR-XT. Complex curve sequence moves can be previewed with the Zone display to show operators exactly how the camera will transition through the studio.

See the Bigger Picture with LiveView
The TR-XT is being shown with the revolutionary new LiveView option that uses a secondary IP video camera to provide a wide-angle scene view for each camera and enables operators to command heads to new positions simply by touching on a wide-angled live video view of the studio. Touching an area on the LiveView screen will smoothly reposition the head towards the selected presenter, guest or other area of interest. 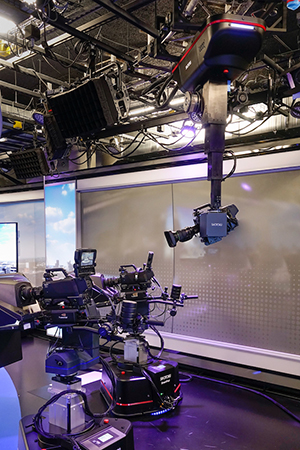 SmartRail Elevates Performance for Creativity and Control
SmartRail, specifically intended for live studio broadcasts that operate 24×7, is a world leading track system ideal for full-size camera configurations. It can be mounted in floor as well as ceiling installations and comes with a range of elevation columns to suit almost any application and budget. Ceiling mounted systems provide an extended elevate/descend range as well as dolly drive allowing the camera to descend to eye-level and also elevate for the higher-level sweeping shots, all with fully integrated motion and under a single Shotoku control system. The advanced design of the elevation column makes it possible to raise cameras to new heights while retaining stability and smoothness of on-air control. Elevation control works upright for floor-tracks or inverted for ceiling-tracks to allow maximum creativity in production design.

Shotoku’s first ceiling track system was installed in 2015 and has been on-air every day since. Today Shotoku has successfully installed SmartRail ceiling track systems all around the world, at a wide range of clients from small studios to large broadcast facilities. As with all Shotoku robotics systems, SmartRail incorporates VR/AR tracking data output.

TG-18 PT Head with Integrated Electronics
The universally deployed TG-18 PT head designed for any studio application requiring a full-size payload and instant switchover between manual or remote operation, is being shown with its new fully integrated electronic control system. The same powerful CMC electronics module used on all standalone TG-18 systems can now optionally be embedded within the body of the TG-18 itself, providing a compact unit with AC power and network connections directly to the head. Fully compatible with the traditional external CMC solution the TG-18i provides added choice for customers dependent on the configuration of their system.

SX200 and SX260 ENG Tripod Systems
The new SX200 and SX260 ENG/EFP camera support systems feature a brand-new ground-up design. The systems incorporate Shotoku’s “Truebalance” which delivers perfect counterbalance and is also easy to adjust throughout the range with an intuitive display to indicate the current setting. The drag system uses Shotoku’s well known “Viscam” design but adds a new actuation system that combines the convenience and speed of selection of a stepped approach, with the fine tuning and on-shot adjustment of a continuously variable design. These 2 core features are poised to set the new standard for movement and control for high-end ENG support systems.

The SX200 has a max payload of 20Kg (44Lbs) and the SX260 25Kg (55Lbs). Partnered with a new 2-stage ENG carbon fiber tripod with fast action de-tented leg locks for quick setup and teardown, the system is also one of the lightest on the market at this payload and performance level.

Shotoku will also show the recently launched SD & SE Manual Tripod Series. The SD range, available in 2 variants, has been developed to provide a quality, affordable system for handheld cameras. The SE range provides support with high functionality and wide-ranging applications for the extended range of camera systems now available.