Suite 4 is a major upgrade for InfinitySet, Aston and eStudio, comprising an extensive set of new features and workflow enhancements

Madrid, February 11th, 2020. Brainstorm, leading manufacturer of real-time 3D graphics and virtual studio solutions, announces the release of Brainstorm Suite 4, a major upgrade to the renowned InfinitySet, Aston and eStudio solutions that includes a number of unique features designed to enhance content creation and output. In addition to a tighter integration and control of Unreal Engine, Suite 4 provides advanced features like simultaneous renders, multiple outputs and additional hardware support. With Suite 4, InfinitySet and Aston greatly improve their capabilities for creating high-quality photorealistic content, no matter if it is for real-time graphics, virtual sets, augmented reality or broadcast workflows in any resolution.

Suite 4 introduces a key feature that changes the game regarding how Aston and InfinitySet deal with broadcast workflows, while providing additional playout possibilities. It is called LAYERS, and its foundation rests on the capability of Brainstorm Suite 4 for creating Simultaneous Multiple Independent Renders using a single workstation. With LAYERS, Brainstorm Suite 4 can now deliver several outputs from a single instance, in both Aston and InfinitySet, or combine several outputs in a single one as required. 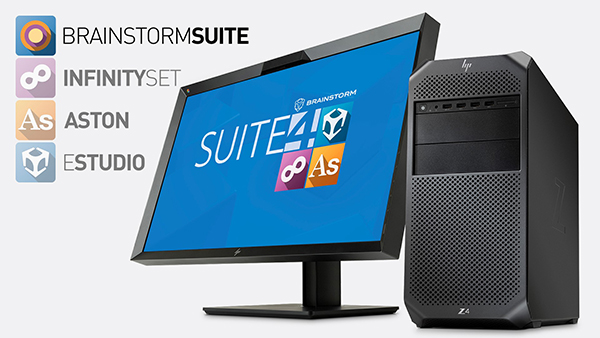 InfinitySet 4 also gains major updates to the rendering features and especially the management and compatibility with the Unreal Engine. This effectively enhances the way the Combined Render Engine, Brainstorm’s seamless integration between the company’s eStudio render engine and the Unreal Engine, works in practice. Another key development is that InfinitySet now features an Unreal-native behaviour, so InfinitySet users can achieve anything Unreal Engine provides in a workflow fully integrated into Unreal. The added value of this configuration is the multitude of benefits of including more than 25 years of Brainstorm’s experience in broadcast and film graphics, virtual set and augmented reality production, including data management, playout workflows, virtual camera detach, multiple simultaneous renders and much more.

On top of that, the InfinitySet Unreal Engine Controller provides additional compatibility for video hardware devices not available in Unreal Engine, including support and driver updates for video IO boards and virtually any tracking device.

Aston 4, Brainstorm’s 2D/3D motion graphics creation, CG and playout solution, also gains a number of enhancements that further improve its capabilities, like shader-based 2D fonts or the ability to open multiple projects simultaneously for playout. And thanks to the LAYERS feature, the Aston family of applications is enhanced with the addition of Aston Multichannel. With this, Aston provides extended workflow possibilities, including playout of multiple channels from a single workstation or from different workstations, which can also be combined with multiple simultaneous projects. Additionally, InfinitySet now includes an Aston Crosspoint for further flexibility. Aston now takes full advantage of NVIDIA’s GPU movie decoding, while its PBR material rendering has been further enhanced.

According to Ricardo Montesa, Brainstorm’s CEO and founder “With Suite 4 we have made a significant leap forward on what can be achieved in virtual sets, augmented reality and real-time broadcast motion graphics. We have worked hard to match and even surpass the high-end requirements of our customers. So now the integration of InfinitySet with Unreal Engine is even tighter, and we have included industry-unique features like the Unreal Engine Controller, that can fully control not only the Unreal Engine projects but also its blueprints, objects and properties directly from InfinitySet’s own interface. We’re very excited with this release and the response received from our customers is excellent.”

Added to all the above, Brainstorm is also introducing the Web Controller, an independent, HTML5-based application designed to control the Playout mode of InfinitySet from a remote computer, using Ethernet protocols, and greatly simplifying the setup and control of multiple workstation installations.

The production version of Brainstorm Suite 4 is available for all customers, and will be demonstrated at NAB 2020 at the Brainstorm booth SL2812.