BT Sport today launches Innovate 21, a competition seeking ideas for exciting new sports broadcast experiences from entrepreneurs, creatives and start-ups. The competition will provide one lucky winner with the opportunity to be at the heart of BT Sport’s industry leading innovation.

With entries open from today, Innovate 21 invites submissions for innovations spanning the entire sports broadcast chain, from production at events through to the viewer at home. BT Sport is looking to uncover exciting ideas from across the UK, with the winner receiving a potential six-figure opportunity to work with BT to develop their idea, technology or service for future use and could even see it become available to all BT Sport customers. They will also receive BT Group mobile and/or broadband connectivity for a period of 12 months at no cost. 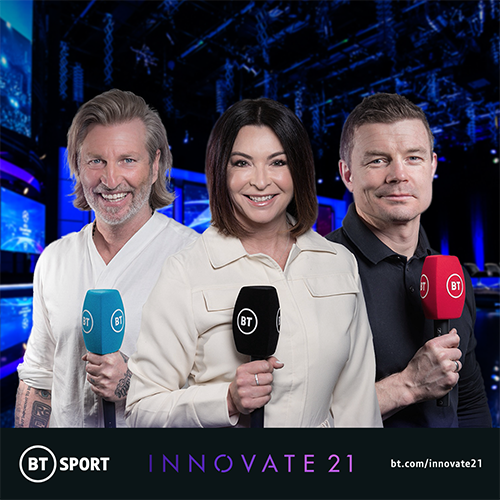 The competition is backed by BT Sport presenters Brian O’Driscoll, Suzi Perry and Robbie Savage who will be part of a panel of experts in September at a special event to select the winning innovation, led by Jamie Hindhaugh, chief operating officer, BT Sport. Those involved in identifying both a shortlist and winner include journalist and technology expert Lucy Hedges, Matt Stagg, director of mobile strategy, BT Sport, Christian Thrane, managing director, marketing, for BT’s consumer division and Andrew Mensah, social media influencer and BT Sport presenter.

Following the deadline for entries on 31 July, finalists will be invited to present their proposals to the panel at the BT Sport studios in East London in September, before a winner is selected. The finalists will also have access to Marc Allera, CEO, BT’s consumer division, for a unique chance to gain insight into innovation and technology from one of the leading FTSE 100 chief executives in the country.

Marc Allera, CEO, BT’s consumer division, said: “Delivering world class customer experiences is one of BT’s core objectives. Innovate 21 from BT Sport is a rare and exciting opportunity for entrepreneurs to join that effort but also to gain access to BT’s renowned expertise and leadership around technology, products and innovation.”

Entrants are encouraged to submit proposals in areas including, but not limited to, the Matchday Experience offering on the BT Sport App, ideas which have a strong sustainability, inclusivity or accessibility focus and ideas which enhance the live sports experience. Full terms and conditions and details of how to enter are available at www.bt.com/innovate21.

BT Sport has a rich history of providing entrepreneurs with opportunities to be at the heart of innovation. Since winning the 2018 BT Infinity Lab competition, Sceenic has worked with BT Sport to support last year’s launch of Watch Together on the BT Sport App. Meanwhile, the winner of the 2016 BT Infinity Lab competition, Seenit, enabled fans to send in short video reports and comments from stadia around the country as part of BT Sport’s Premier League Tonight show.

Jamie Hindhaugh, chief operating officer, BT Sport, said: “BT is offering entrepreneurs the chance to join BT Sport’s industry-leading pursuit of providing the ultimate sports viewing experiences to customers. We are proud to have continually given our customers even more ways to watch and experience sport in recent years and Innovate 21 looks set to raise the bar even further for what BT Sport’s customers can enjoy.”

BT has been at the heart of sports broadcasting innovation over recent years:

BT Sport has a track record of innovation, operating from one of industry’s most sophisticated sports TV studios, and delivering world-firsts around Virtual Reality, Dolby Atmos, 4K UHD and remote production. Its achievements have been recognized with awards from IBC, Promax, Music Week and more.

BT Group is the UK’s leading telecommunications and network provider and a leading provider of global communications services and solutions, serving customers in 180 countries. Its principal activities in the UK include the provision of fixed voice, mobile, broadband and TV (including Sport) and a range of products and services over converged fixed and mobile networks to consumer, business and public sector customers. For its global customers, BT provides managed services, security and network and IT infrastructure services to support their operations all over the world. BT consists of four customer-facing units: Consumer, Enterprise, Global and its wholly-owned subsidiary, Openreach, which provides access network services to over 650 communications provider customers who sell phone, broadband and Ethernet services to homes and businesses across the UK.

British Telecommunications plc is a wholly-owned subsidiary of BT Group plc and encompasses virtually all businesses and assets of the BT Group.  BT Group plc is listed on the London Stock Exchange.