IABM has announced the winners of its highly prized annual awards at the IABM Annual International Business Conference, which took place in London on 4th and 5th December 2019.

The awards recognize outstanding achievement in 2019 in key areas of the broadcast and media technology industry: the fostering of young talent; technological achievement; technology leadership; broadcaster/media company innovation; and creative collaboration between technology vendors and end-users. In addition, a new award was presented this year – the BaM Shining Star. A final award – Honorary Membership of IABM – was made to an individual who has played a major role in the development of the industry over the course of their career. 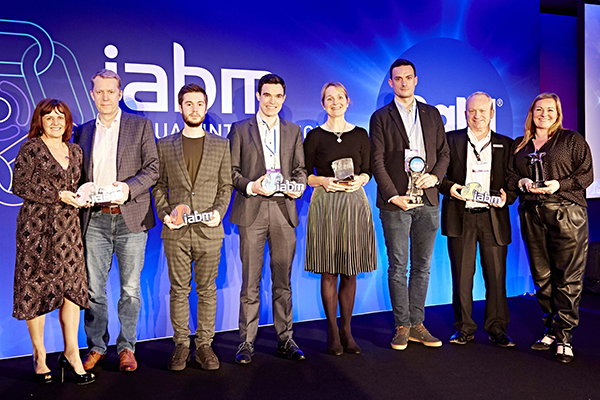 IABM Young Person of the Year

Alex Quince
Alex joined dB Broadcast in June 2018 having graduated from the University of Salford with a 1st Class Honours Degree in Media Technology. Alex made an immediate impact at dB with his work on the company’s project for Discovery. David Bird, dB Broadcast Managing Director said of Alex: “dB have trained over 50 young graduates during our 30 years and Alex has been the most impressive in his first year”. dB Project Manager, Phil Keeler, added: “Alex’s work ethic is one of his best qualities. This manifests in him as commitment to any task he decides to tackle: everything from replacing a poorly performing connector to a ‘ground up’ design for a new system, he brings this powerful quality to bear.”

All the 20 winners of the IABM’s NAB Show and IBC BaM Awards® are automatically shortlisted for the year’s top broadcast and media technology prize – the Peter Wayne Golden BaM Award® for Design and Innovation. The judges put their heads together again to pick the overall winner – the brightest star in the 2019 broadcast and media technology firmament:

EVS – Overcam
The EVS Overcam is an AI-driven system that enables the autonomous control of robotic cameras in live sports environments, providing more viewing angles at a fraction of the cost and with guaranteed broadcast quality.

The judges said: “A very innovative and much needed solution. EVS has created a product sorely needed by the production industry, enabling lower cost sports production which allows sports which normally don’t receive coverage to get broadcast. Combines emerging technologies like AI to create better content more efficiently. With the explosion of live sports coverage and the need to reduce costs with remote production techniques, Overcam is a very promising solution for budget-conscious live sports producers.”

The Creative Collaboration Award celebrates ground-breaking innovations that have been realised through creative collaboration between technology suppliers and their customers. It recognizes break-through solutions resulting from close partnership between technology supplier(s) and their customer that provide measurable commercial or creative benefits to the customer. The 2019 winner is:

As the host broadcaster for the FIS Alpine World Ski Championships, held in Åre, Sweden in February 2019, Sweden’s national public broadcaster Sveriges Television (SVT) had the opportunity to push the boundaries of live production. SVT wanted to be more ambitious than ever, deploying more cameras and delivering more angles and live replays for a rich, captivating viewing experience.

SVT’s goal of retaining most of the production team and functions such as camera matching, coloring and shading at its home studio, made ultra-low latency even more critical. The decision was made to employ an end-to-end open standards-based IP remote production infrastructure – but the challenge was delivering on the sheer scale needed.

The project broke new ground with remote/at-home production, demonstrating reliability and robustness across long distances. A collaboration between multiple vendors and a broadcaster, drawing on their collective expertise to create a proven use case for productions of any size and complexity. The result is a cost and time-saving model that delivers minimal latency – with zero compromise on the flawless images audiences demand.

Adde Granberg, SVT’s director of technology and CTO, said: “This was a unique project on a scale that has never been seen before and it proves that this workflow can stand up to even the most rigorous conditions. We can now do much more with less equipment and staff on location, and this experience has given us the ability to create programming in new ways.”

The Technology Leader Award recognizes a person who is at the forefront of disruption and innovation within the broadcast and media industry who, through inspired leadership, has helped to deliver ground-breaking technology and business benefits. This year’s winner is:

Several years ago, Manfred and his team set themselves the goal of intelligently linking the strengths of broadcasting with the broad capabilities of mobile networks. In June 2017, Rohde & Schwarz joined the pioneering research project 5G Today as a partner, with Manfred leading the Rohde & Schwarz team. A milestone for 5G TODAY was reached in December 2018 when R&S put the world’s first high-power, high-tower transmitter for 5G Broadcast into operation in the Bavarian Alps. The team then debuted the world’s first end-to-end solution for LTE/5G Broadcast at NAB Show 2019.

“Rohde & Schwarz has provided me with a platform to achieve all my goals and dreams as a broadcast technologist. Together with some truly inspirational colleagues, we have made, and continue to make, a real difference to broadcasters and consumers worldwide. And with 5G Broadcast, the best is still to come,” Manfred Reitmeier said.

The Broadcaster/Media Company Award recognizes and rewards broadcasters or media companies that have demonstrated throughout the year that they are at the forefront of creating and distributing ground-breaking content through innovation across the content chain.

Noa
Noa is changing the way people engage with quality journalism. It provides spoken-word versions of articles from publishers such as The New York Times, Financial Times, The Telegraph and Harvard Business Review. Noa has a novel approach: each audio article is grouped into a topic-specific playlist which allows people to listen from A-to-Z on any subject, in minutes. This is a learning-based approach to news consumption that can be heavily gamified and scaled.

“We are succeeding in the battle for people’s time, especially the younger demographics – our mission is to ensure quality journalism remains relevant to a mass consumer audience,” said Noa co-founder, Gareth Hickey. “We don’t want to live in a world of unfiltered information. It is our belief that in a world where people consume multiple sources of trustworthy media, fake news smothers and knowledge begets knowledge.”

This new award recognizes an individual who has made an outstanding contribution to the industry over an extended period of time in any field of endeavor, but who typically goes ‘under the radar’ in terms of personal recognition. This year’s winner is:

Sadie Groom
Sadie Groom set up Bubble Agency in 1999 to provide PR, Marketing and Events support to broadcast and media technology companies. 20 years on, Bubble Agency is widely recognized as one of the leading agencies in the industry, working with both established and new companies to enhance their presence in the market. Sadie remains the driving force of the Bubbles’ success – working closely with clients on strategy, messaging and campaigns.

Sadie is also a passionate promoter of women within the broadcast and media industry. In 2017, she founded Rise with the primary mission to help advance the careers of women working in technical roles across the industry. Rise runs a mentoring programme, networking and educational events throughout the year as well as working to promote female role models. This year, Rise held its first Annual Awards during IBC and also launched a new, industry-led schools outreach program in conjunction with BT Sport and Sky.

“Through Rise, Sadie is making a real impact on the perception of, and opportunities for, women in our industry,” said Lisa Collins, IABM Head of Marketing, “and all this while tirelessly leading one of the most active and effective agencies in broadcast and media. Sadie richly deserves the recognition that the BaM Shining Star award bestows.”

Naomi Climer CBE
Naomi Climer joins an exclusive club that is a veritable ‘Who’s Who’ of people who have made a major impact on the broadcast industry as it has grown and developed over the last 40+ years.

After joining the BBC as an engineer more than 30 years ago, Naomi rapidly moved into leadership roles, first setting up two new local radio stations, then taking up the post of Controller Technology at BBC News. This was followed by a 13-year career at Sony Professional Services Europe, culminating in the role of Vice President Professional Services with P&L responsibility for $1bn of products, services and solutions.

Typical of her innate grasp of where technology can take us, Naomi saw the potential of the cloud early, and in 2012 took up the role of President, Sony Media Cloud Services to incubate and build Sony’s cloud business for the global B2B environment. In 2015, Naomi was appointed President of the IET, then took up the Chair of the UK government’s DCMS Future Communications Group, followed by a stint as Governor of the National Film and Television School. Today Naomi holds several non-executive director, chair and trustee positions – including chairing the IBC Council. In the Queen’s 2018 Birthday Honours, Naomi was awarded a CBE for services to the engineering profession.

“Our award winners this year have all made great contributions to advancing the art and science of broadcast and media, demonstrating outstanding leadership and innovation to power our industry’s ongoing success. I congratulate them all on behalf of everyone at IABM; we share their values and drive, and are committed to fostering excellence and collaboration by providing our members with all the tools they need to succeed as the rate of transformation in our industry continues to accelerate,” IABM CEO, Peter White, concluded.