iSIZE presents a paper at CVPR, the world-leading computer vision and AI conference

iSIZE is to present some elements of its ground-breaking technology at CVPR.

CVPR is the premier computer vision conference and artificial intelligence worldwide, and features presentations from leading figures in industry and academia. It is organised by CVF, the Computer Society, a part of IEEE, and acceptance/rejection decisions are based on very rigorous peer review by leading experts. The 2021 event will take place virtually, from 19 to 25 June.

iSIZE applies artificial intelligence to video systems, modelling the way the eye perceives visual information. This can be used in a number of applications, the primary of which is video streaming. Within video streaming systems, iSIZE preprocesses the input video stream prior to passing it on to a conventional encoder. The final output can be received and decoded by any device, but at a significantly reduced bitrate for any given quality level. This is all achieved with as low as 3ms latency, without requiring any changes to the existing streaming pipeline, and can also be used for energy and cost savings in video and game streaming systems. The CVPR paper outlines some of the concepts used by iSIZE for rate-aware deep perceptual preprocessing and also presents extensive test results and comparisons against the state-of-the-art under very stringent test conditions. 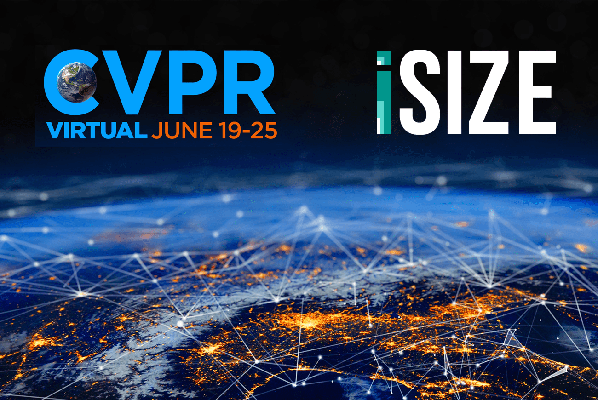 “We are excited to present our work at CVPR. Our deep perceptual preprocessing is the first-of-a-kind neural processing component applied for bitrate reduction over state-of-the-art video coding. Similar to the psychoacoustic preprocessing in mp3 audio (and beyond) that delivered music over the web with significantly improved efficiency, we see our approach as a key step towards AI-based psychovisual preprocessing for optimized video processing and delivery.” said Andreopoulos, the CTO of iSIZE, and Professor at University College London in the UK.

“Given that this is an entirely new approach for increased efficiency across the video encoding and streaming landscape, sharing some elements of our work via top-tier peer review at conferences like CVPR is important,” he added. “Unlike other proposals in recent years, this research is applicable today with existing and upcoming state-of-the-art coding standards, from AVC all the way to AV1, AV2 and VVC, which form the backbone of all current and future video streaming services.”

More information on CVPR can be found at cvpr2021.thecvf.com.