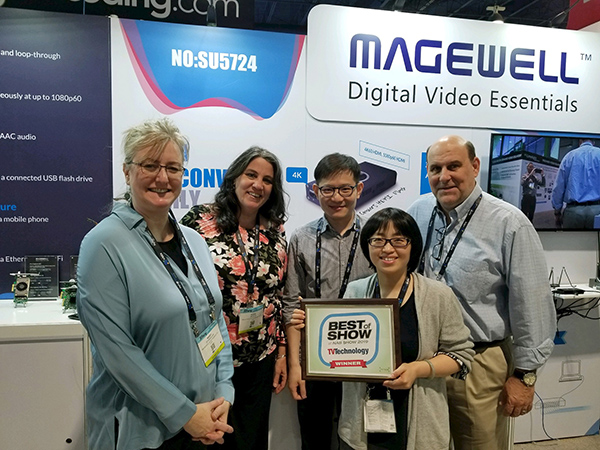 Magewell added further value to Pro Convert Plus models at the NAB Show with the announcement of new NDI decoding capabilities as a free firmware upgrade. Users can switch between encoding and decoding modes through a browser-based interface, enabling NDI streams to be converted to high-quality HDMI or SDI outputs for applications such as digital signage, video walls, IMAG and monitoring.

Future’s Best of Show Awards are evaluated by a panel of engineers and industry experts, and are selected based on innovation, feature set, cost efficiency and performance in serving the industry. The winners will be featured in TV Technology, the digital television authority, serving the broadcast, cable, production, post production, business and new media markets.

“The Future Best of Show Awards at NAB are in their sixth year,” said Paul McLane, Future managing director, content. “The program focuses attention on superb innovations in technology as seen around the million-square-foot exhibit floor of the industry’s top trade show. The list of 2019 winners and nominees shows where media technology businesses are headed.”

“We are very pleased that TV Technology has recognized the Pro Convert family with this award,” said Amy Zhou, Sales Director at Magewell. “By enabling users to maximize their existing investments rather than needing to replace their current HDMI or SDI equipment, Pro Convert helps make the transition to IP-based workflows achievable and affordable for more customers.”