Melbourne, Australia 13th January 2022– Today ATOMOS is introducing a feature to expand recording options for Sony’s FX6 full-frame Cinema Line camera. With Sony’s latest firmware release (V.2.00) for the FX6, it’s possible to record Apple ProRes RAW over HDMI to the NINJA V and NINJA V+. This update marks a world first for a single camera package to use both SDI and HDMI RAW recording options.

The addition of RAW out via HDMI on Sony’s FX6 marks a turning point in camera functionality. To this point the convention has been for compact cameras to output RAW via SDI only. ATOMOS is leading the market to develop and introduce the ability to record ProRes RAW via HDMI. It is an advancement that highlights the flexibility of the NINJA V platform and creates opportunity for filmmakers to mix and match ProRes RAW recording between different camera setups across Sony’s Cinema Line. The NINJA V and NINJA V+ provides the entry point for Sony’s FX3 and FX6 to use HDMI with resolutions up to 4.2K and up to 60fps. 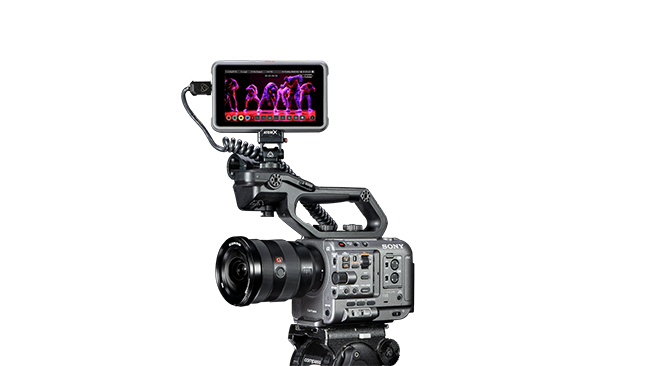 ProRes RAW over HDMI with the NINJA V/V+ when combined with Sony’s FX3 and FX6 supports 4.2K up to 60fps. The NINJA V+ Pro Kit/ NINJA V+ and SDI module with SDI RAW Activation further extends support for 4K up to 120fps. For customers who would like the choice of SDI connectivity need to add the SDI module to the NINJA V/V+. For RAW support, including HDMI cross conversion, activation of the supplemental RAW license can be completed online using the my.atomos.com portal.

“We’re committed to provide filmmakers across the world with innovative solutions. The introduction of ProRes RAW recording over HDMI to the popular FX6 camera from Sony proves our commitment to support our customers, help them progress and exceed expectations in the pursuit of their creative dreams.”

Apple ProRes RAW combines the visual and workflow benefits of RAW video with the incredible real-time performance of ProRes. The format gives filmmakers enormous latitude for adjusting the look of their images and extending brightness and shadow detail during post. This flexibility makes it ideally suited for HDR workflows. Manageable file sizes speed up and simplify file transfer, editing, media management, and archiving. ProRes RAW is fully supported in Final Cut Pro, Adobe Premiere Pro and Avid Media Composer, along with other applications including ASSIMILATE SCRATCH, Colorfront, FilmLight Baselight and Grass Valley Edius.

Atomos exists to help creative professionals cut through technology barriers by creating easy to use, cutting-edge 4K and HD Apple ProRes monitor/recorders. These products give video professionals a faster, higher quality and more affordable production system, whether they create for social media, YouTube, TV, or cinema. Atomos continues to demonstrate its commitment to putting users first through continual innovation at amazing price points. The company developed the AtomOS operating

system dedicated to video recording with an elegant and intuitive touchscreen user interface and was also the first to implement the professional Apple ProRes RAW format for recording with cinema cameras. Atomos is based in Australia with offices in the USA, Japan, China, UK, and Germany and has a worldwide distribution partner network.