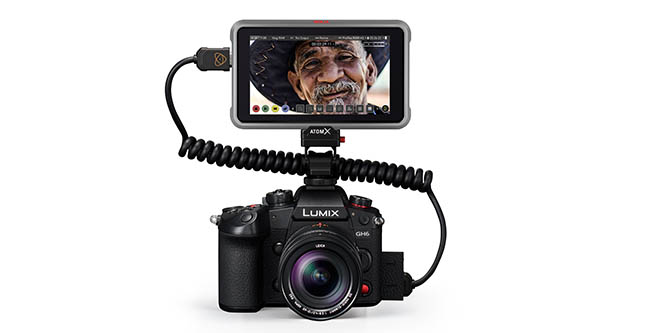 The new LUMIX GH6 camera builds on the heritage of the LUMIX series and the pioneering legacy of the original DMC-GH1, which was launched 2009. Like its predecessors the LUMIX GH6 is based on the Micro Four Third system (MFT) and features a newly designed 25.2-megapixel Live MOS sensor. The internal technology includes a new high-speed Venus Engine which can process images at twice the speed of earlier models. Housed in rugged body with a forced cooling mechanism, the LUMIX GH6 is splash, dust and freeze resistant (to –10C), meaning filmmakers can embark on some the most extreme adventures and let long takes roll on with confidence.

The bright, accurate, HDR display of the NINJA V and NINJA V+ provides an accurate preview of the image from the LUMIX GH6 in remarkable detail. The 5-inch touchscreen offers access to a wide range of software tools including waveforms, false color, check focus, framing guides, LUTs and image magnification. With the NINJA V/V+ filmmakers can be confident in their technical and creative decisions during production to get the perfect HDR or SDR shot.

While the sheer amount of throughput needed to process ProRes RAW at DCI 4Kp120 requires the power of the NINJA V+, it’s important to note that NINJA V and NINJA V+ offer an extensive range of alternative formats and frame rates. The range of options make the combination with the LUMIX GH6 compelling for filmmakers across the board. The robust design and compact form form-factor of each unit means they can be taken anywhere and used effectively at any time. The LUMIX GH6 and NINJA V/V+ are extremely mobile, and at home when used as part of a handheld setup, positioned in a tight space, or mounted on a gimbal.

“Pairing the new Panasonic LUMIX GH6 camera with the NINJA V/V+ furthers our goal to provide support for the very best cameras. We’re constantly impressed with what filmmakers can accomplish when we provide new technological solutions. We’re excited to see what they’re able to produce with this latest combination.” Estelle McGechie, ATOMOS CEO.

ATOMOS is proud to be adding yet another exciting camera to the ever-growing ProRes RAW eco-system. ProRes RAW has continued to build momentum with over 40 cameras supporting the ATOMOS and ProRes RAW combination, cementing its position as the industry standard for RAW video capture. It’s great to see that ProRes RAW is increasingly supported across multiple camera models from different camera manufacturers, demonstrating they are firmly committed and are investing in the future of ProRes RAW recording. ProRes RAW combines the visual and workflow benefits of RAW video with the incredible real-time performance of ProRes. The format gives filmmakers enormous latitude when adjusting the look of their images and extending brightness and shadow detail, making it ideal for HDR workflows. Both ProRes RAW, and the higher bandwidth, less compressed ProRes RAW HQ are supported. Manageable file sizes speed up and simplify file transfer, media management, and archiving. ProRes RAW is fully supported in Final Cut Pro, Adobe Premiere Pro and Avid Media Composer along with a collection of other apps including ASSIMILATE SCRATCH, Colorfront, FilmLight Baselight and Grass Valley Edius.

Atomos exists to help creative professionals cut through technology barriers by creating easy to use, cutting-edge 4K and HD Apple ProRes monitor/recorders. These products give video professionals a faster, higher quality and more affordable production system, whether they create for social media, YouTube, TV, or cinema. Atomos continues to demonstrate its commitment to putting users first through continual innovation at amazing price points. The company developed the AtomOS operating system dedicated to video recording with an elegant and intuitive touchscreen user interface and was also the first to implement the professional Apple ProRes RAW format for recording with cinema cameras. Atomos is based in Australia with offices in the USA, Japan, China, UK, and Germany and has a worldwide distribution partner network.