Los Angeles, CA – Prime Focus Technologies (PFT) is pleased to announce that the United States Patent and Trademark Office has issued a patent (U.S. Patent No. 10,904,595) for its Just-in-Time embedded watermarking solution of streaming proxies within CLEARTM.

The studios and content owners typically rely on invisible watermarks (commonly referred to as forensic watermarks) as there exists no technology that transcodes content in real-time to apply the visual user watermark without impairing the user experience. While these served the purpose of traceability in the event of a leak, they couldn’t deter such leaks from happening. Hence the reliance on UI over-lay-based, visual watermarks. However, these have their obvious limitations of being hacked. 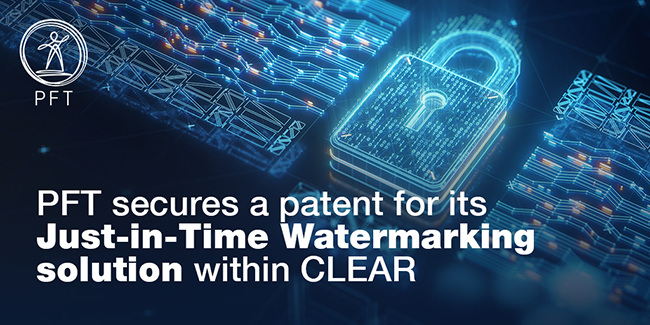 This patented solution comes with two major innovations: (1) the ability to apply user-specific burnt-in watermarks, real-time and (2) make the experience of a “Just-In-Time-Watermarked” stream as seamless as that of a CLEAN stream. At its core, this invention treats every streaming-segment request from a user’s video player, as an atomic segment that will need to be transcoded by a GPU-farm and handed back in real-time to the player. All this, in conformance with the needs of the standard streaming protocols including HLS/DASH among others. Consequently,

– Any segment requested, across any bit rate, is served with a watermark and

– Any high-speed trick-play request (up to 3X) is served elegantly, since it relies on high-speed transcodes through the GPU farm.

“Piracy has been and continues to heavily impact our industry at the world-wide level. Such an invention now provides studios and content owners the ability to protect their pre-release content through strong and reliable deterrence mechanisms that are embedded within their streaming infrastructures” said Ramki Sankaranarayanan, Founder and Global CEO, Prime Focus Technologies.  “With Cloud costs continuing to drop and GPUs becoming even more affordable, it is a matter of time when the industry will decide to provide streaming URLs to their content-partners and vendors, instead of creating copies of content, individually watermarked for their use.

Click here to read about the other patents awarded to Prime Focus Technologies.

Prime Focus Technologies (PFT) is the creator of Enterprise Resource Planning (ERP) software, CLEAR™ for the Media & Entertainment (M&E) industry. It offers broadcasters, studios, brands and service providers transformational solutions that help them lower their Total Cost of Operations (TCOP) by automating business processes around content and managing their business of content better.

PFT is the technology subsidiary of Prime Focus, the global leader in M&E industry services. For more information visit www.primefocustechnologies.com