The “Vienna Volksoper” (“Volksoper Wien”), Vienna’s grand house for operetta, opera, musicals and ballet, is a cultural treasure. Housed in an equally treasured building which dates back to 1898, it is significant in being the only concert house in Vienna which produces operettas. Volksoper is colorful, multifaceted and joyful, providing superior musical entertainment.

This historic venue is home to not only opera and theater facilities, but also a to a recording studio and state-of-the-art control room — one of the few performance theaters in Europe equipped with recording and control facilities. And those facilities now also boast a brand-new Lawo mc²56 console, commissioned by Lawo technicians using remote-control technology.

Volksoper Wien’s facilities are used to record performances for both television broadcasts and concert recordings, especially of premieres, and also to create audio clips used during performances. In fact, all of the opera’s publicly available audio content is produced within their own walls. As the only multi-purpose venue in Vienna which produces a full complement of opera, operetta, musical and ballet, flexibility is key; more than 150 singers, 95 orchestra musicians and 100 dancers are part of Volksoper Wien’s ensemble, which places high demands on the audio technology used in both the performance space and the recording suite. 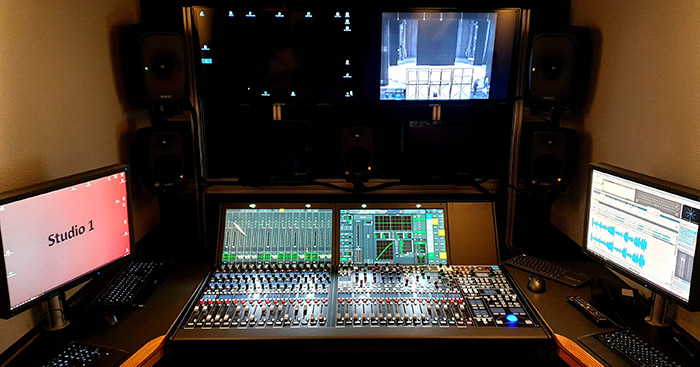 To meet these demands and also prepare for the future, the Volksoper was equipped with a new, IP-based mc²56 mixing console from Lawo, commissioned in January 2020 to replace the
first-generation mc²56 installed in 2012.

As with everything, the Volksoper was affected by coronavirus this season, with safety measure leading to a standstill of stage operations, with restricted access to the building and audio control room, presenting unique challenges in installation and configuration of the new console. Martin Lukesch, Volksoper Project Manager and Head of Sound and Media Technology, along with Lawo project engineer Daniel Egea, decided to approach the process using remote-control commissioning. In addition to the mxGUI software supplied with the mc²56 console, selected online conference media were employed, allowing for optimal interaction between Vienna and Rastatt.

The remote-control approach has become very familiar to Egea. “At the beginning of April, when coronavirus safety measures were still extremely strict and no one, not even the client’s own engineers, were able to carry out installations or factory acceptance tests on-site or at our premises, Lawo developed an infrastructure that enabled remote FATs,” he recalls. “With continuing safety protocols around the world, we have worked to make remote commissioning and its corresponding workflow a standard part of our process. It’s now almost routine for us to supervise a project remotely!”

“Like nearly everyone else, corona disrupted our plans,” says Lukesch. “If someone had told us at the beginning of the year that we would commission the new mc²56 console by remote support, I would have just shaken my head in disbelief. But it worked out beautifully. After the new console was delivered in May, the mechanical installation was carried out by the Volksoper crew using appropriate health-safety protocols. Then, using the online setup, Mr. Egea was able to read out all data remotely and create new Compact Flash cards for the console, and remaining adjustments were then made again by remote maintenance. All data and production content were transferred, and everything worked without any problems.”

During a normal September-to-June performance season, the program of Volksoper Wien’s 1,337-seat repertory theater includes dozens of different productions with almost 300 performances. This year, the last performance took place on March 10th, but rehearsals re-started in June. On weekends, the Volksoper is currently presenting concerts for a maximum of 100 listeners in the auditorium, with regular performance operations scheduled to re-start on September 1st.

The new season will be kicked off with the operetta “Die Fledermaus” by Johann Strauss, followed by Cole Porter’s world-famous musical “Kiss Me, Kate”. On September 13th, the eagerly awaited premiere of the musical “Sweet Charity” is planned; it is an adaptation of Frederico Fellini’s film “Nights of Cabiria” (originally titled “Le Notti di Cabiria”) for which the renowned playwright Neil Simon and then-largely unknown composer Cy Coleman debuted in the 1960s. The biggest hit of this musical, “Big Spender”, has been served as an appetizer for the Volksoper production on Youtube: https://youtu.be/bW1NqUnSmYw. The audio production of this video was of course done using Volksoper’s new mc²56 mixing console.

In conclusion, Lukesch says that “Everyone – the ensemble, the musicians, the technicians, and our colleagues from the various trades – is glad that there is once again the possibility to have a largely normal season. Even though we are already familiar with our new console through training and experience with the previous Lawo console, we will gradually be able to fully explore the possibilities of our new mc²56 in day-to-day operation — and I am very much looking forward to that!”