Claimed by the company to be a world’s first in IP workflow multiviewing, the new Scalable Distributed Multiviewer feature offers unprecedented configuration flexibility for users through its ‘any to any’ function. This unique feature, which can be added to existing PRISMON installations, enables any input to any output connectivity through IP proxy networks for up to 36 remote devices. 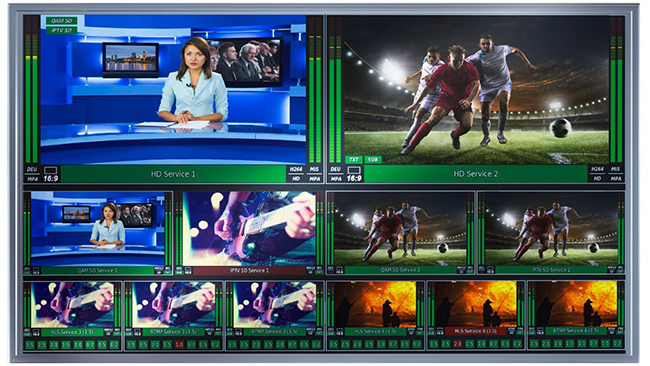 This scalability option enables users to display a mosaic view on a particular PRISMON system with input services decoded on any other PRISMON system within the same proxy IP network. So, for example, users can render a view with multiple UHD inputs – beyond the decoding capacity of a single system. In addition, it helps overcome the fact that only a limited number of physical ASI and SDI interfaces are available on a single system.

“As broadcasters continue to increase channel numbers and distribution methods to consumers they need technology that enables them to quickly adapt to everyday changes,” commented Andreas Loges, Vice President Media Technologies at Rohde & Schwarz. “This new Scalable Distributed Multiviewer function in PRISMON provides an extraordinary level of flexibility by allowing you to offer any input signal, decoded on any PRISMON within the IP network, to be displayed on any other PRISMON output within that same network.”

In addition to this increased flexibility, the new Scalable Distributed Multiviewer Function has been designed to address several other common issues found within IP-based production and distribution networks. One of these is the thorny issue of resource allocation: the latest version of PRISMON requires significantly less CPU power and fewer decoding licenses. The SDM feature also provides higher network flexibility and is part of a series of new tool sets that will allow configuration of a large number of PRISMONs through a centralized control user interface – the Multiviewer Control Center.

Rohde & Schwarz is a leading supplier of solutions in the fields of test and measurement, broadcast and media, aerospace | defense | security and networks and cybersecurity. The technology group’s innovative communications, information and security products help industry and government customers ensure a safer and connected world. On June 30, 2019, Rohde & Schwarz had 12,100 employees. The independent group achieved a net revenue of EUR 2.14 billion in the 2018/2019 fiscal year (July to June). The company is headquartered in Munich, Germany, and has subsidiaries in more than 70 countries, with regional hubs in Asia and America.

Rohde & Schwarz has been an innovator in broadcast and media for over 70 years. The Rohde & Schwarz product portfolio covers the entire signal processing chain for digital video and audio content – from ingest and playout to encoding and multiplexing, from contribution to satellite and IP networks to terrestrial transmission. It includes solutions for monitoring in the studio, as well as for monitoring streaming and broadcast services and entire broadcast networks. The T&M expert also offers a diverse range of instruments for testing end user equipment and infrastructure components in development, production, and quality assurance. Rohde & Schwarz invests in an IP and software-based future built with the blend of innovation, experience, and stability that the company can offer.

R&S® is a registered trademark of Rohde & Schwarz GmbH & Co. KG.
All press releases, including photos for downloading, are available on the Internet at www.press.rohde-schwarz.com