Originally planned as a technical and cosmetic upgrade of the busy production and sound control rooms, the STV team were determined to explore Audio-over-IP to enhance current workflows and allow a route for future expansion across the facility. The STV team approached Lawo at the IBC in Amsterdam 2019 drawn by the flexibility of Lawo’s new mc²56 (MKIII) Audio Production Console and the opportunities presented by its IP-based architecture.

With Covid-related lockdown and travel restrictions last year delaying the project, STV reviewed its requirements and  Lawo Rental department sent a console to Glasgow for evaluation by STV engineers. With the support of Pre-Sales Engineer Frank Mosch, Lawo provided  remote evaluation and training for STV’s team to familiarize themselves with the surface layout and plan deeper IP integration. 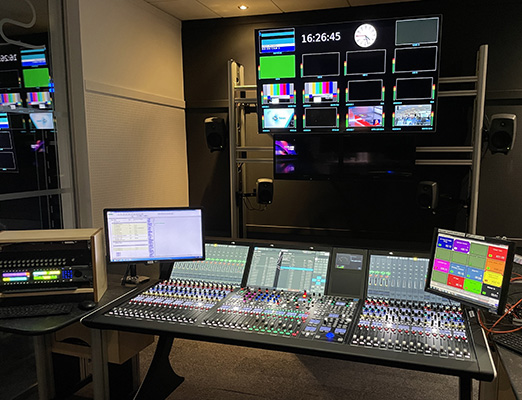 In December 2020, Lawo announced an update to the popular A__UHD Core DSP processing platform. The announced A__UHD Core (Phase 2) enabled STV to benefit from IP signal and distribution, and a reduced rack footprint .  This saving in space and power usage along with the Easy IP setup features included in the new Lawo IP management platform HOME, enhanced the move towards Audio-over-IP infrastructure.  Lawo also supplied a Mix Kitchen setup to increase the system’s flexibility and enable remote hardware control of the console.

Completing the setup, STV chose Lawo’s A__mic8 stageboxes for the studios. Multiple A_mic8 were installed in wall boxes distributed equally around the studio instead of a larger centrally located A__stage64 unit to help reduce microphone cabling. R3LAY Virtual Patchbay (VPB) was also deployed for the SpotOn playback software, moving away from a separate AES based soundcard.

As construction on STV’s facilities progressed, a technical issue resulted in the new Lawo audio console system being brought online early for a series of live Scottish Parliamentary Election broadcasts in early May.

“We wanted to spend as much time with the Lawo equipment as possible before implementation to better understand how the new AoIP workflows work and integrate with our other sound systems and to be able to make the best use of the flexible and scalable workflows”, says Sam Dornan, Channels Operations Manager of STV Central. “Technical issues resulted in us bringing the console online earlier than planned and we received instant support from Lawo.  The majority of commissioning and training with the mc²56 was already completed, but kudos to the Lawo team and our STV engineering team who worked together to get everything swiftly changed over in a short space of time. It was a tense few days but the Lawo is very flexible and intuitive.”

“We had this project scheduled to finalize in early June, when the STV control room was planned to be ready for production  when unexpectantly Sam got in touch and explained the situation. Of course, the Lawo and STV teams got cracking straight away”, recalls Devin Workman, Lawo’s Director Audio Sales, UK and Ireland. He adds: “this project serves to demonstrate the flexibility of IP technology in establishing infrastructures.”

The native-IP A__UHD Core – UHD stands for “ultra-high density” – presented in December 2020 is Lawo’s new console core for mc² consoles, delivering an astounding 1,024 channels of mc²-quality audio processing in just 1RU, while dramatically cutting power consumption. It provides multiple sets of monitoring matrices, downmixing and upmixing, and is ready for next-generation audio formats such as Dolby Atmos® and MPEG-H. Lawo’s new A__UHD Core is a native IP device, designed from the start to work within IP networks and manage networked devices. As such, it is based fully on open standards such as ST2110-30/-31, AES67, RAVENNA, Ember+ and NMOS. And it’s designed for both 48 kHz and 96 kHz operation.

Lawo’s mc² consoles and its surface-less operations including mc² Micro Core can be controlled from anywhere using internet connection: Lawo’s Mix Kitchen is a solution for any scenario where physical access to the broadcast center is cumbersome or simply impossible. An important ingredient of the proposed setup is remote fader control using a Mackie® HUI-compatible fader panel. In addition, Lawo’s Mix Kitchen enables in-place access to any computer in the broadcaster’s data center and can be complemented with an integrated vsmPanel providing full remote control over hundreds of third-party devices. Mix Kitchen includes LiveView™ video monitoring capabilities in combination with Lawo’s IP video solutions. No additional Lawo hardware is required: readily available, off-the-shelf tools, a laptop and Lawo’s mxGUI allow to take control of the Lawo hardware at the broadcast center or hub—with the same pristine audio quality and reliability, keeping mission-critical TX audio within the facility’s infrastructure and avoiding bandwidth-guzzling multi-channel audio transport

At NAB Amplify, Lawo debuted HOME, an innovative management platform for IP based media infrastructures. HOME is natively built on a cloud-ready microservices architecture, enabling users to connect, manage and secure networked production setups from the ground up. Furthermore, it provides centralized access and control for all Lawo gear within a setup. HOME helps broadcast professionals address some of the most demanding requirements of modern IP infrastructures, including automated discovery and registration of devices, connection management, flow control, software & firmware management, scalability and security.