Context & Challenge: Innovation in the Digital Age SWR is on a mission to make innovation its core business as it transforms from producing traditional television and radio into a digital media house. With goals centered around outstanding content and technology, SWR must make its news production workflow faster and more agile.

“We want to migrate to a Cloud infrastructure and introduce automated recording and indexing to better manage our live feeds” explains Sven Wilhelm, head of the LiveU support team at SWR. 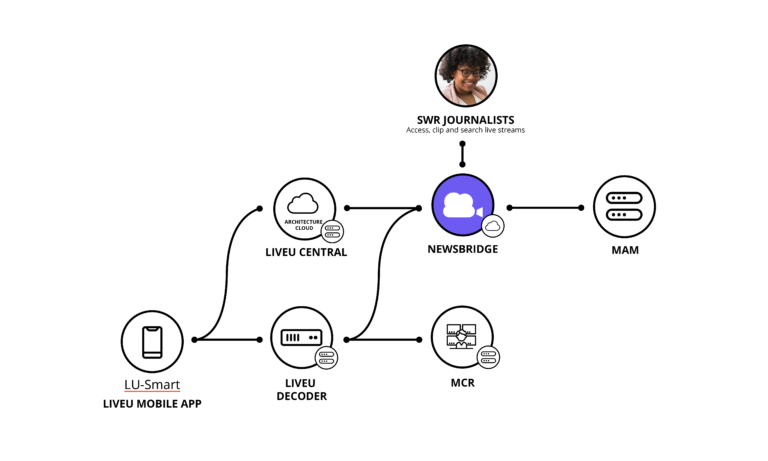 “Currently we have 60 LiveU units and 500 LU-Smart licenses deployed to our teams and reporters, capable of transmitting content to our master control rooms. Dedicated slots are needed, and journalists must be physically in the office to see and access the streams. This workflow requires advance planning, human resource allocation and we can experience bottlenecks due to, for example, longer-than-planned transmissions.”

This is where a collaboration between SWR and Newsbridge made perfect sense.

SWR is running Newsbridge’s Live Asset Manager as an extension to its existing workflow. The AI-powered Cloud Media Hub ingests incoming LiveU feeds. Newsbridge Multimodal AI indexing including face, OCR (optical character recognition) and speech-to-text transcription is applied to the content to make it more searchable. Metadata is extracted and reconciled for SWR’s existing media asset manager. Several teams of journalists working across SWR’s national and regional news and politics programs will use the Newsbridge Media Hub. It gives them instant access to their content from anywhere, in real time. Speech-to-text enables reporters to quickly derush and identify highlights which can be filed or published to multiple platforms immediately.

He continues: “Personally I’m excited about the interactive elements of the Newsbridge portal and the team’s excellent customer support via chat.”

Newsbridge is a cloud media hub platform for live and archived content.

Whether it be for managing and accessing live recordings, clipping highlights, future friendly archiving, content retrieval or content showcasing and monetization – the solution allows for smart and efficient media asset management.