NETINT Technologies launched the Codensity™ T408 video transcoder platform featuring real-time, high-quality, scalable H.264/H.265 ASIC based transcoding for live video streaming at up to 8K. Packaged in a 2.5” U.2 module form-factor for easy field upgrades, the T408 features sub-frame encoding latency that ensures an immersive experience for interactive video services and ultra-low-power and high density encoding for Edge based deployments.

MPEG-5 LCEVC (Low Complexity Enhancement Video Coding), the latest MPEG standard, is a codec enhancement technology that significantly enhances the video streaming performance of existing and future codecs. V-Nova LCEVC is a multi-platform software library for MPEG-5 LCEVC that improves the compression quality of any base video codec by up to 50% whilst simultaneously accelerating encoding by up to 4x. Any playback device supporting the underlying codec can be quickly upgraded in software to gain the benefits. 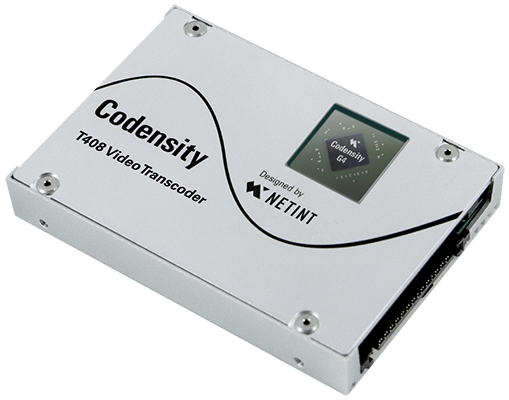 Leveraging V-Nova’s LCEVC, the T408 transcoder module’s performance will be enhanced with increased encoding quality and throughput. These improvements will provide access to V-Nova’s LCEVC technology to a wider market, increasing the viability of new emerging services including cloud mobile gaming, social mobile video, and live streaming of UHDTV content.

“With the explosive growth of internet streaming video, new technologies that enable lower total cost of ownership for data center operators is a critical requirement for creating scalable, sustainable encoding solutions. We have been following the progress of LCEVC standardization and are excited by the recently published performance reports and its ability to be deployed immediately, even in software,” said Tao Zhong, Chief Executive Officer, NETINT Technologies. “We are excited with the performance of LCEVC and look forward to a continued collaboration between both companies, as we work towards implementing LCEVC in NETINT’s next-generation silicon.”

“Our collaboration with NETINT illustrates again how even high-performance hardware transcoding applications can be enhanced to deliver next-generation picture quality for both live and VOD applications,” added Guido Meardi, CEO and co-founder at V-Nova. “The proven ability of LCEVC to enhance the compression performance of any base video codec (e.g., AVC, HEVC, AV1, EVC or VVC) while lowering the overall computational complexity, is gaining strong traction in multiple applications. It’s great to see more and more companies working towards LCEVC adoption. We see a lot of interest in high-quality high-density transcoding from customers of both parties, so we look forward to working together in addressing these opportunities.”

V-Nova, a London based IP and software company, is dedicated to improving data compression by building a vast portfolio of innovative technologies based on the game-changing use of AI and parallel processing for data, video, imaging, point cloud compression, with applications across several verticals.

This is achieved through deep-science R&D (300+ international patents) and the development of products that test, prove and continuously enhance the technology portfolio.

V-Nova’s business model is to monetize its technologies through software licensing, IP royalties and product sales.