Witness the Impact of Expanding Your Ministry through Video Streaming Technology

Ben lives with the family of his best friend in the capital city of Lusaka in Zambia. Both of the boys are strong, healthy, and now completing their last few years of high school with formidable marks. When they are not studying, they take their talents to the soccer field. On the surface, Ben probably seems like a child you know, but his success today is nothing short of extraordinary, perhaps even a miracle, brought about by the passion and dedication of Capital Christian Ministries International (CCMI).

Building an international ministry through video

Using a Matrox® Monarch HD encoder, CCMI has been able to live stream online, spreading its reach far and wide, and gather the necessary tools, human power, and financial resources to give more children like Ben a future to look forward to. “Using the Monarch HD to do live streaming from these remote sites, we’re able to take a message that, two or three years ago, would have been trapped inside a building,” said Randall Rike, Director of Technical and Media USA for CCMI. “With live streaming, we’re literally worldwide and anyone with internet can get on and see it.”

Ben was orphaned shortly after being born, with neither his mother nor his two triplet siblings surviving childbirth. As one of the thousands of orphans of the HIV/AIDS epidemic, Ben was sent to a transition home, where he would await adoption for the first five years of his life. With the resources available at CCMI, including the help from parishioners in different specializations, Ben was able to receive the medical care, education, and emotional support he needed to make the full transition into his new life. “He’s very intelligent and we’re looking forward to seeing him go on and do much more,” said Bishop George Mbulo, President and Senior Pastor at CCMI.” 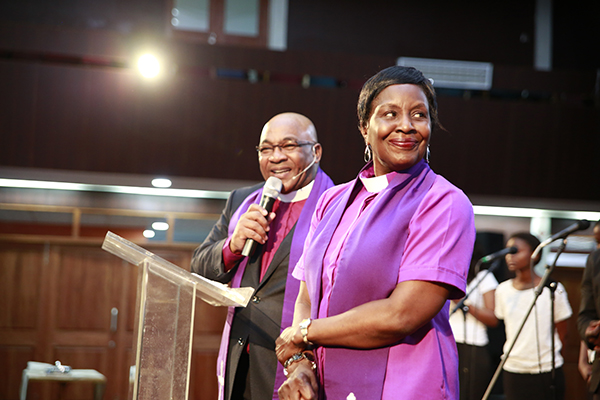 Making a positive impact is at the core of Mbulo’s work. In order to bring about change, he and CCMI use video technologies, like Monarch HD, to send live streams of CCMI church services from all four of its campuses, international conferences, and speaker series to Facebook so that the rest of the world can join in. “Social media has become kind of a social event in Zambia,” said Rike. Oftentimes, groups of individuals will gather around their smartphones to watch videos on social media, including CCMI live streams.

For CCMI, live streaming was not always part of the media strategy, but when it came time to begin live streaming the organization’s message, choosing a streaming and recording appliance was a no-brainer. Despite some skepticism about streaming technologies, particularly regarding expensive price points and complicated hardware setups, Rike decided to give Monarch HD a chance. “When I saw this tiny box, it resolved everything, and moreover, I was blown away,” said Rike. “I knew that many ministries were live streaming, and I knew that CCMI needed to get involved sooner rather than later, and seeing Monarch HD made me realize this was now a very real possibility. I personally purchased Monarch HD for CCMI. The price point was well within my budget for these types of projects, and easy-to-use is an understatement.”

When producing live streams from the different venues, the CCMI media and technical team packs a road case filled with cables, converters, adapters, and Monarch HD so that it can connect to any type of equipment a venue may have. The team finds that using Monarch HD is not only effortless, but also enjoyable. “When I shipped this to my team in Zambia, they discovered how cool and easy-to-use it was,” said Rike.

Once on site, the team captures services and events using cameras, which are connected to a video switcher. The video switcher then sends feeds to Monarch HD via HDMI. Because internet connectivity can prove to be unpredictable at different venues, the team has gotten creative with its means of finding internet to support its live streams. Some venues, such as the Mulungushi Conference Centre, have a high-bandwidth internet connection. Most other facilities do not have high enough internet bandwidth, and therefore require the team to subscribe to a local Zambian phone company. The phone company provides 3G/4G-capable routers, and the team purchases a reloadable, pre-paid SIM card. The team can then connect its routers to the Ethernet of the host venue. “We are building a new sanctuary and soon it will be our own, so we’ll have more control over the internet,” said Rike. “Right now, we’re using rented facilities, and because of that, we’re at the mercy of whatever their internet is like.”

When internet bandwidth is sufficient, the CCMI team connects the HDMI video source to Monarch HD, and sets the device to stream 3 Mbps video to Facebook at 720p and at 30 fps. In cases when bandwidth is insufficient, the team sets Monarch HD to stream 1 Mbps video at 360p and at 30 fps. This lower format allows CCMI to ensure live streams are sent no matter the quality of the internet connection. The team also often uses both Monarch HD’s SD and USB ports on separate occasions to record copies for director’s cuts during live productions. Thanks to independent streaming and recording settings, Monarch HD can record at the highest possible resolution and quality regardless of streaming bitrate. While using an SD card is ideal for the team, they find that having the USB option has come in handy on multiple occasions. “Having both options is great and ideal,” said Chikombe Chela, Media and Technical Supervisor for CCMI.