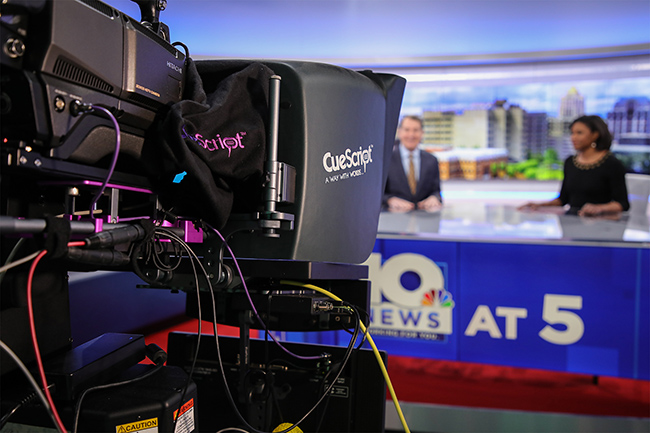 WSLS produces 31 hours of live newscasts each week for the Roanoke-Lynchburg market, as well as local lifestyle programming including the Daytime Blue Ridge Spotlight. The broadcaster initially launched its new studio space in 2019 using its existing, decade-old cameras alongside additional units borrowed from a sister station. In 2021, WSLS undertook a long-planned camera technology refresh to enhance both its visual quality and creative options.

“Improving our picture quality was the main thing we wanted to do, but our previous cameras had also become unserviceable,” said Ricky Williams, Director of Technology at WSLS-TV. “We also wanted to add new production capabilities such as automated lift.”

Systems integrator Digital Video Group (DVG) had built the technology core of WSLS’ new studio and recommended the SK-HD1800 cameras as ideal fits. “Beyond the quality advantages, the success DVG has had with Hitachi cameras at other broadcasters was a big factor,” said Williams. “We do so much live production every day that taking a camera out of our rotation to resolve any issues would impact our product. DVG’s excellent experience with Hitachi’s reliability was important to us.”

WSLS went live with the SK-HD1800 cameras in November 2021, with DVG performing the integration and Ross Video handling the setup of camera robotics. With live production happening throughout the day, WSLS deployed the new cameras and robotics two at a time to minimize disruptions. “The Hitachi cameras were really easy to integrate even while on-air with our other equipment,” explained Williams. “We would start on one camera at the beginning of the day, and by the end of the day that camera was on-air doing our 5 o’clock show. It was really neat to be able to add them in as the day progressed.”

That phased approach to implementation made the quality benefits of the SK-HD1800 even more evident. “The improvement in picture quality was very noticeable as soon as we went on-air with the first two units,” recalled Williams. “We could immediately see an A/B difference next to the older cameras we were still using. It motivated us to speed up the deployment of the rest of the new cameras, since it would be so obvious to viewers that we were using both generations at the same time.”

Two of the SK-HD1800s are deployed on new Ross BlackBird pan/tilt/lift elevation systems to accommodate varying heights in the studio and sets. The remaining four SK-HD1800s are set up on Miller 3230 Combo Live 55 pedestals with Ross pan/tilt heads. Five of the cameras are used for newscasts, with two – including one shared between both purposes – used on the Daytime Blue Ridge Spotlight set on the other side of the studio. Production is automated through the Grass Valley Ignite platform, with Ross Video routing systems, Xpression graphics, and Dashboard control software rounding out the infrastructure.

The SK-HD1800’s global shutter sensor has proven adept at providing exceptional acquisition in WSLS’ LED-rich environment, which features a row of nine vertically mounted LED displays behind the news desk and an LED cube as a highlight. Williams also notes that achieving these stellar results requires very little ongoing effort.

“The Hitachi cameras have upped the game in picture quality in our new studios, helping us better showcase the set and the people on it,” he summarized. “The SK-HD1800s don’t require us to do a whole lot of adjustment. They’re pretty much ‘set and forget’ and they just work, which is ideal for our automated workflow.”