Latin America – which generally refers to all the territory that is south of the United States – is an emerging broadcast and media technology market. The major economies such as Brazil, Mexico and Argentina are still leading development in the region.

While many countries in this region lack the infrastructure and resources required to develop the broadcast and media industry, further challenges are presented by the unattractive business and political environment in certain countries, which also deters investment. In fact, in recent years, the region has struggled with a slowdown in economic growth, caused by weak macroeconomic policies, political uncertainty and a volatile business environment.

GDP growth has continued to decline since 2010, falling to negative figures in 2015 and 2016. The decline in GDP has been driven by the fall of metal and energy prices, which represent a sizable portion of Latin American countries’ exports. A corruption scandal in Brazil and a deep economic crisis in Venezuela have not helped mitigate this climate. 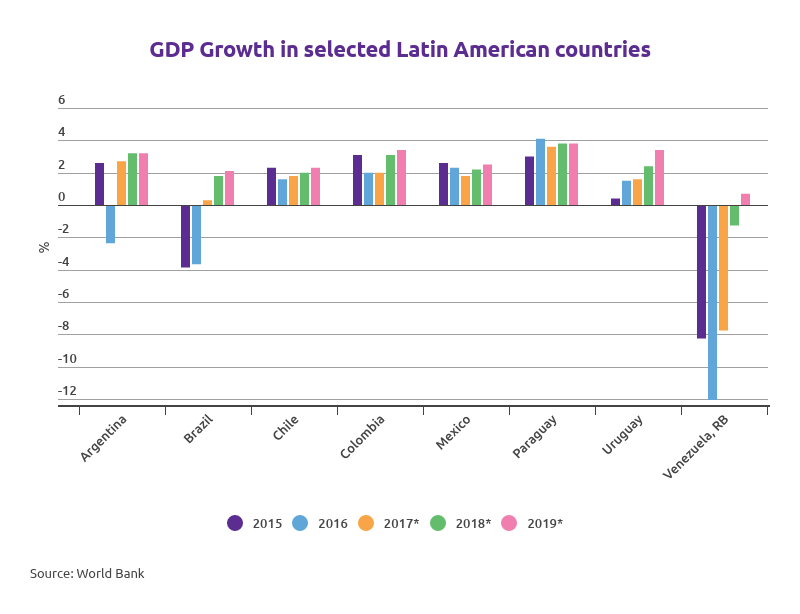 Despite these challenges, Latin America is still undergoing the transition to digital broadcasting and HD, thus representing an attractive opportunity for suppliers of broadcast and media technology.

The transition to digital broadcasting is ongoing with only Mexico having fully transitioned. Several countries have experienced challenges when transitioning. While some governments have taken a proactive approach, others have not as they tackle other economic and political challenges that are seen as more important. Due to this the individual countries that make up Latin America have different digital penetration rates. Some countries including Brazil, Chile, Mexico and Panama already had more than 90% digital viewers in 2016. However, other countries in the region including Argentina, Bolivia, Guatemala and Honduras had a digital penetration rate below 60% in 2016.

The transition to digital is a major a driver for the growth of HDTV in the region with the number of HD channels set to grow further over the coming years. In the region, HD remains a differentiator mainly offered by Pay-TV operators to retain a competitive advantage over rivals. The growth in HD channels has been mostly driven by the development of satellite broadcasting, as well as the progression of digital TV subscribers. Satellite service providers have turned to Latin America and other emerging regions to compensate for low growth in maturing markets such as North America and Europe.

The growth in HD channels has been mostly driven by the development of satellite broadcasting, as well as the progression of digital TV subscribers - IABM Regional Focus Report: Latin America Click To Tweet

Several Pay-TV operators have ramped up their HD channel deployments in recent years. Cablevision, Argentina’s largest Pay-TV operator, has continued to add HD channels throughout 2017 and into 2018, bringing its offering up to 70 channels. Sky Brasil added nine HD channels in 2017.

The transition to UHD remains at a very early stage with only a few initiatives because the major focus for broadcasters at present is on upgrading infrastructure to HD. Globo, Brazil’s largest media company, together with Japanese firm NHK, used UHD 8K for live transmission of the opening and closing ceremonies as well as several events of the Rio de Janeiro 2016 Summer Games. Globo also launched “Dangerous Liaisons” in 4K HDR on its VOD service, Globo Play. Other broadcasters have tested UHD transmission, but regular offerings by major operators are limited.

OTT in Latin America is on the rise although challenges from low broadband penetration and poor broadband speeds still hinder development. Broadcasters in Latin America are starting to address changing consumer habits. However, instead of launching standalone OTT platforms, media companies in Latin America are now partnering with Pay-TV operators, offering subscribers free access to their VOD libraries and streaming services. Therefore, a challenge for many media companies in the region is monetization of VOD services. As service providers continue to invest in infrastructure and media companies continue to produce content, partnerships and content agreements are likely to increase globally, redefining industry business models.

Netflix launched in the region in 2011 after agreeing deals with regional broadcasters including Grupo Televisa and TV Azteca. Netflix has been able to grow in the region largely due to a lack of competition when it first launched and being an attractive alternative for customers.

Recently the OTT market in Latin America has been heating up with competitive pressures being felt by operators. Major broadcasters such as Televisa and Globo have recognized the growing threat of OTT offerings and launched their own streaming apps for connected devices or connected TVs. Televisa launched its OTT service, Blim, with a focus on original local content. The company also decided to withdraw its content from Netflix when its contract ends, making it exclusively available on its own service.

A number of SVOD apps have been launched in the last few years from smaller operators in Latin America, as the popularity of these services grows. These are often launched as mobile apps as the smartphone is also driving consumers’ viewing habits, especially among millennials.

A number of SVOD apps have been launched in the last few years from smaller operators in Latin America, as the popularity of these services grows. These are often launched as mobile apps as the smartphone is also driving consumers’ viewing… Click To Tweet

Due to this, Netflix has recognized the need for increased investment in local content and talent by investing in local voices to expand the range of stories being created. The announcement of a new original series filmed in Mexico in 2017, Diablero, joins 50 new and returning productions in various stages of development in Latin America.