THE CHOICE TO GO IP WITH ZIXI

“We have been monitoring advancements in technology to support reliable broadcast quality content delivery over IP – and it is here. Zixi offers a complete system platform that is very flexible and at a competitive price. The flexibility allows programmers like us to offer alternative services and find ways to monetize these services.” – Michael McCrackan, SVP Engineering and Operations

As C-band spectrum is re-allocated to accommodate for 5G deployment, and the amount of bandwidth available diminishes, broadcasters are exploring alternative transport solutions for content delivery and looking for ways to cut costs and utilize more efficient methods to acquire and deliver content.

IP delivery has emerged as an efficient and reliable alternative to satellite distribution of live content, offering many transport advantages. Many content providers are shifting primary distribution from satellite to IP for the realization of new monetization opportunities, better visibility into stream data, greater regionalization of content, and improved targeting and advertising customization to drive revenue. IP networks also allow for a more flexible and elastic infrastructure that can easily adapt to meet future streaming requirements. When deploying specific broadcasting instances for occasional use, with an IP-based infrastructure it is easy to stand up and take down streams as needed with little incremental cost compared to more traditional pathways like satellite or fiber.

“Although the satellite service works very well to deliver a national feed, we were limited in bandwidth capacity and could not offer targeted streams to specific customers without extended cost to deliver those streams. Given advancements in technology, we have been looking for and monitoring various services to provide an alternative solution.”

For over three decades, Music Choice relied on various fiber and satellite partners for primary content distribution. With an expiring satellite contract, Music Choice’s SVP of Engineering and Operations Michael McCrackan took the opportunity to explore alternative solutions that would be easy to implement, work with their existing hardware infrastructure, allow for better access control over deployments, as well be encrypted to prevent signal piracy. They also wanted a more efficient solution that would enable them to reduce costs by leveraging software-based applications over IP networks instead of relying on rigid, fixed infrastructure.

The operations team also wanted to have more insight into distribution data compared to what was previously provided via satellite so that they could make better informed decisions when generating unique content for major MVPDs, and therefore leverage a more customized distribution strategy that was better optimized to target specific MPVDs as well as drive alternative applications across the service platform.

Music Choice chose to leverage the SDVP for primary distribution over IP networks, moving their delivery off satellite and into the cloud. Some of the key Zixi solutions leveraged were:

Zixi as a Service: Music Choice was able to deploy ultra-low latency IP transport workflows without managing infrastructure by leveraging the Zixi as a Service (ZaaS) cloud-based solution for universal aggregation and distribution. With Zixi as a Service, they were able to quickly leverage IP to contribute and distribute live video, allowing the push or pull of live and live linear video into or out of the cloud. The deployment enabled the easy addition of unique content for major MVPDs to access and then quickly deploy to Zixi integrated partner devices in the field. Music Choice was able to leverage a complete solution for video processing with access to the additional data, robust analytics, best-in-class security, and Quality of Service that professional broadcast requires, all at a lower cost than alternative cloud service providers.

The Zixi Enabled Network: The Zixi Enabled Network of integrated technology providers includes over 250+ technology partners around the world. Music Choice was able to leverage their existing IRD devices that had already been deployed at close to 200 sites in the field for their distribution workflows as they were already Zixi-enabled. With a simple software update, Music Choice was able to switch on Zixi and leverage their existing hardware infrastructure to make it compatible with their new IP-based workflows.

ZEN Master: The Music Choice team was able to orchestrate, monitor and manage their live streams at scale by using Zixi’s ZEN Master control plane. Music Choice engineers were able to centralize access to Zixi-enabled devices in the field all from within ZEN Master’s browser-based interface, and with its alerting system and source graphs that visualize stream health and analytics, administrators could easily investigate issues across all Zixi endpoints from within ZEN Master, shortening time and effort when conducting root cause analysis.

“The POC put the Zixi system to the test – where we simulated reasonable packet loss and watched the system recover without any audio drops or interruption of service.”

With Zixi already able to work within their existing infrastructure, deploying the new solution was extremely straight forward. A firmware upgrade was sent out to all IRD devices in the field, and with only a software update and no additional CAPEX expense for a hardware refresh, the endpoints were equipped to receive the signal from the primary content distributor.

In the distribution workflow, Music Choice set up redundant, diverse network paths coming from their facility on the East coast. Once through the company firewall, the live video streams were delivered using Zixi transport over the open internet to two separate software clusters hosted in the Zixi cloud in both US East and West locations. 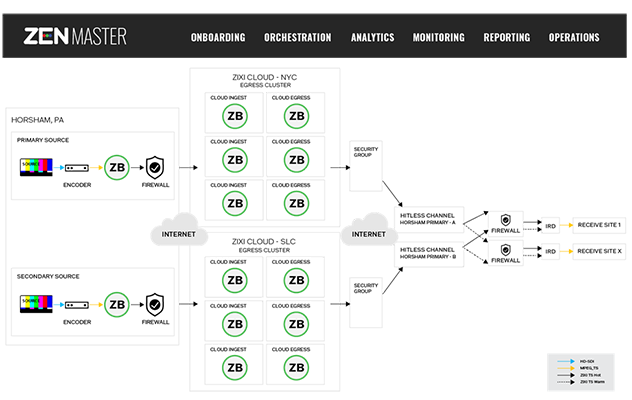 Target devices actively pulled Zixi transport streams from the US East cluster, while a secondary warm input was configured to pull from the US West instance where the devices initiated failover if or when it was needed.

“The transition for our MVPD customers was seamless. Once the internet connection was made to the IRD, everything else for the MVPD customer operates as normal. The output of the IRD is the same as if the source came from satellite. And with ZEN Master we are able to detect an issue with the connection to the IRD prior to even the customer realizing there is an issue.”

“Start to finish it took approximately 4 months to transition our full customer base and turn down the satellite feed.”

From the time the onboarding began, the entire transition from satellite to IP for primary delivery was completed in 4-months for all target locations.

The software-based turnkey solution enabled Music Choice to move off satellite rapidly, and in a cost-effective manner with efficient use of the Zixi cloud and the Internet for content delivery. The transition required little operational lift and no incremental hardware infrastructure investment as the devices in use were already part of the Zixi Enabled Network of integrated devices. Moving to IP networks for live video transport allowed Music Choice to quickly deploy customized channels, create new sources and deliver targets as needed with little incremental cost. With the SDVP’s robust suite of analytics that gathers billions of datapoints a day, Music Choice can garner more insight for affiliates while maintaining visibility and increasing data telemetry throughout their distribution ecosystem. The virtualization of the broadcast infrastructure on the SDVP and decision to leverage IP-networks for transport has allowed Music Choice to offer alternative target streams and channels and set the company up for a future expansion to a direct-to-consumer offering.

By transitioning off satellite for primary distribution, Music Choice can leverage the flexible delivery infrastructure of Zixi’s SDVP to easily adapt to future streaming needs with ease, while delivering broadcast-quality content with the Quality of Service and the Quality of Experience that music fans demand.

“We are now able to deliver custom feeds specific to the MVPD which allows us to deliver targeted messaging to their subscriber base. This was a capability we could not support with satellite feed without adding additional bandwidth and cost.”