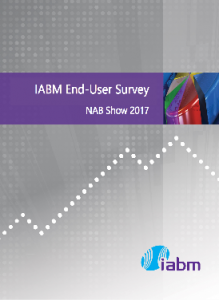 As part of its wide portfolio of business intelligence services to members, IABM conducts an end-user survey twice a year – immediately prior to the NAB Show and IBC. The surveys include questions across the full range of end-user concerns – Business Sentiment & Outlook; Revenue: Current & Future Sources; Broadcast & Media Technology Procurement; Drivers of Product Choice; Impact of IT Technology; Broadcast & Media Technology Adoption; and Collaboration.

IABM has just published the results of the NAB Show 2017 End-User survey, and while responses are inevitably skewed towards American concerns (72% of respondents were US-based) they nonetheless provide invaluable insights into the state of the end-user business today, and where it is heading tomorrow. Comparisons with the IBC 2016 survey also point out both similarities and differences between primarily European and US markets, and as the body of surveys continues to grow (IABM conducted its first end-user survey in 2012), trends begin to become evident.

The 2017 NAB Show survey elicited 655 responses, with respondents split into groups such as production/post-production companies, broadcasters, system integrators, studios and Pay-TV operators. Of those categorized as ‘Other broadcast and media technology buyers’, 67% are either corporate, education or worship. What follows is a snapshot of the results – you can see more information here: https://theiabm.org/wp-content/business-intelligence/end-user-survey

Respondents were asked about their overall feeling regarding the commercial outlook over the next 2-3 years and the results are encouraging, with 74% feeling quite positive or very positive about the business environment – slightly up on the 2016 NAB Show survey (73%) and flat compared with the NAB Show 2013 survey – which was the previous record high for the US (IBC 2016 returned 76% positives in response to this question – a record for Europe). 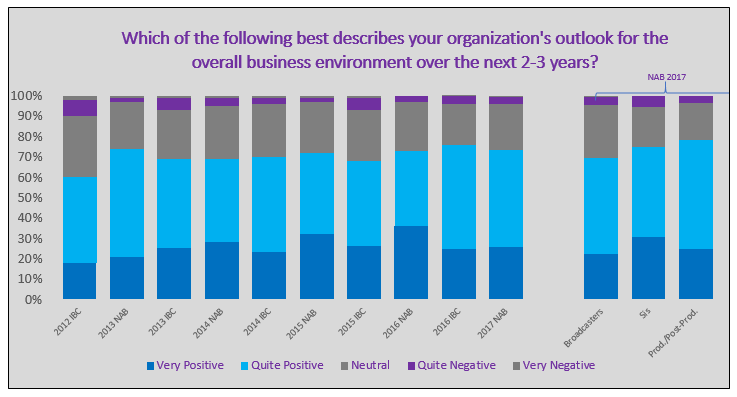 Confidence in North America remains high despite the major changes affecting the market. This can be brought back to a positive 2016 for most end-user organizations. In fact, in 2016, various sporting and political events helped traditional broadcasters boost advertising revenues. With regards to Pay-TV, 2016 was quite negative with most operators losing a significant number of subscribers. Despite the trend in subscriber figures, IABM’s End-User Index data shows that both media networks and Pay-TV operators are growing revenues at the moment. The End-User Index tracks the financial performance of broadcast and media technology end-users.

The broadcast and media industry is evolving rapidly as video and audio content becomes available on multiple platforms. The challenge for broadcasters and content owners has been to find a way to satisfy this consumer demand while at the same time generating incremental (and profitable) revenue.

Comparing the operating profit margins of traditional media companies such as Disney and CBS with those of next-generation video providers such as Netflix and Amazon Instant Video shows a striking difference. While most traditional broadcast customers boast operating margins between 20% and 40%, next-generation media customers’ margins are generally between 0% and 10% – Netflix’s operating margin in 2016 was 4%. Operating profit data from our IABM End-User Index are shown on the chart below – we have identified a “Broadcast Realm” and an “OTT Realm”.

On a global basis, new activities such as multi-platform content delivery are already key revenue drivers for many types of end-users. This is not surprising: a plethora of consumer research studies have demonstrated how viewing habits have shifted to new platforms. Expectations have greatly risen as consumers now demand to watch video on a variety of connected devices when they want and, most importantly, where they want. This has not been good news for end-users who are seeing their traditional business model – funded by “broadcast dollars” – progressively eroding in favor of new ways of delivering video – which hold the promise of “digital pennies”. 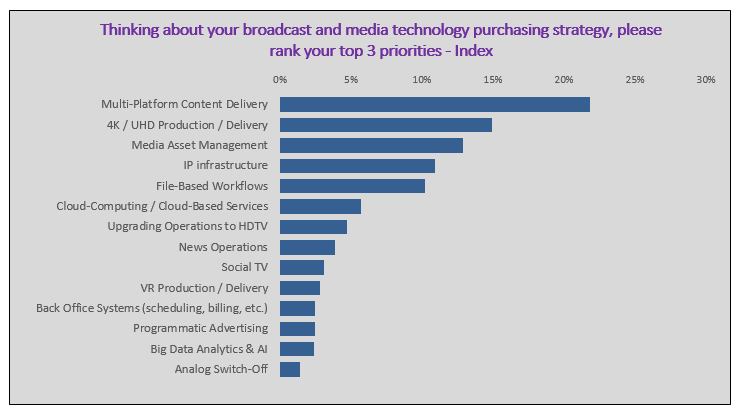 Topping the list of the projects considered most important “multi-platform content delivery”, which was cited more times than any other project as the most important strategic priority for broadcast and media technology buyers. Media technology end-users continue to prioritize multi-platform delivery initiatives as audiences’ viewing preferences shift to new mediums. This has been a primary priority for end-users for quite some time now. “4K/UHD production/delivery” and “media asset management” were cited as the #2 and #3 most important priorities respectively. The industry’s broadcast and media purchasing decisions are becoming increasingly business-oriented rather than technology-oriented.

Impact of IT Technology

There is no doubt that IT is becoming an increasingly important part of broadcast and media operations. Throughout the survey we see that various IT-oriented product categories are high on the “shopping list” of customers, and that benefits of IT such as increased efficiency have become central to the strategic planning of many customers. 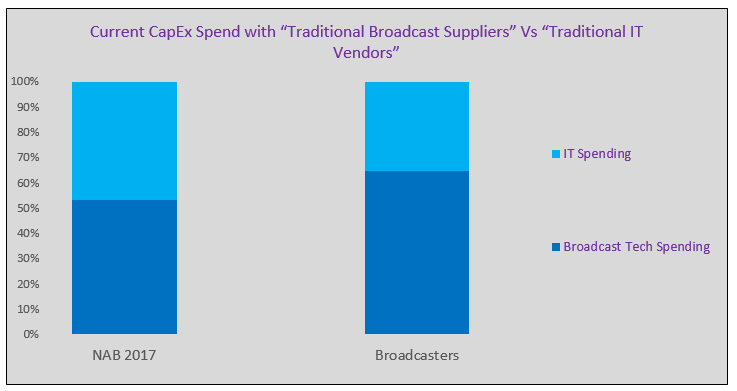 The spend on traditional broadcast technology has continued its slow decline from around 60% in 2012 to 53% today – and when asked to look forward 2-3 years, responses indicate that IT spending will capture the majority of expenditure, moving to 51%.

We asked the broadcasters only among the respondents about their timelines for launching UHD services. 10% already offer some UHD, 22% plan to launch within three years, a further 33% within 4-10 years and a striking 35% have no plans at all to launch UHD services. Asked which technology they would choose to support UHD adoption, 41% did not yet know, 27% would choose pure IP and 21% hybrid SDI/IP infrastructures.

These results show that the majority of end-users remain unsure about the approach to adopt to deploy 4K/UHD. However, respondents that do have an idea about the optimal approach to 4K/UHD deployment strongly prefer Hybrid SDI-IP or IP installations over SDI-centric alternatives. These results confirm that the transition to IP infrastructures may facilitate the adoption of 4K/UHD technologies.

Responses to the question ‘how likely are you to deploy some sort of cloud based technology over the next 2-3 years?’ are shown in the following chart.

These results confirm that the adoption of cloud-based technology in the media & entertainment business continues to flourish – 27% have already deployed cloud-based technologies. The survey also asked about Artificial Intelligence technology adoption – still very much an emerging technology – as shown by the results, with just 5% already using it today, 38% predicting a deployment in the next 2-3 years and 57% unlikely or not at all likely to deploy in this timescale.

While business models are changing fast in the end-user business as they respond to viewers’ demands for more content, anywhere they want to view it and on whatever device they choose, confidence remains strong and technology vendors are fighting hard to deliver technologies to match end-users’ business needs against a landscape of continuing uncertainty and change.

This article is inevitably gives just a small window into the rich information produced by the End-User Survey – the full report runs to 75 pages. You can read more about it on the IABM website. https://theiabm.org/wp-content/business-intelligence/end-user-survey.