VILLAGE island has an exciting new addition to the flagship VICO converter series: the JPEG-XS enabled VICO-4L-XS. This new converter allows 4K XS encoding/decoding at various compression rates (from 8:1 to 60:1), enabling a 12G-SDI 4K conversion to IP, and streaming in compliance to the SMPTE ST-2110 standards.

Thanks to this upgrade, customers can now transport 4K/UHD (4:2:2 10bit 3840×2160 59.94p/50p) broadcast video over a standard GigE link according to the ST-2110 standards while keeping the “visually loss-less” quality and the “near-to-zero” conversion delay performance well known for intoPIX wavelet codecs. By “visually loss-less” quality, it is meant that human eye cannot perceive visual deterioration in standard viewing professional environments. By “near-to-zero” overall delay, it is meant sub frame delay, which is down to several tens of video lines.

“By combining the ST2110 standard and the JPEG-XS standard, VICO-4L-XS enables the construction of new high-speed, high-quality remote broadcast workflows, accelerating the transition from SDI to IP in our customer studios and OB vans.”, says Michael Van Dorpe, CEO of Village Island.

JPEG XS, like intoPIX TICO and JPEG-2000, is a wavelet-based codec that targets high-quality video. A remarkable advantage of wavelet-based codec, compared to DCT-based codecs like H.264, HEVC, is the possibility to cascade multiple encoding/decoding chains without video degradation through such process. JPEG-XS enables the preservation of the original video quality with near-to-zero latency. It enables to management of more pixels thanks to its advanced compression optimization, and it also enables savings in implementation cost and power consumption, when compared to its predecessor TICO, and to a further extend when compared with JPEG-2000.

“We can distinguish two mentalities (or customer expectations) when deciding to use wavelet-based codecs such as JPEG XS, TICO, J2K versus DCT-based codecs such as HEVC, H.264.”, says Edgar Carlos, Senior Product Engineer. “DCT-based codecs are designed to reach the lowest bitrate with acceptable video quality, and they surely offer a remarkably good performance in such cases, however we qualify such video quality as ‘Visually Lossy’, with PSNR values typically measured below 40dB.”

Wavelet-based codecs come with a different spirit in mind. Their aim is to not compromise the original quality of the content. There is surely quality degradation when lowering the compression rate here as well, but the degradation is graceful (as compared to the block of pixel constraints with DCT-based codecs) and most importantly, wavelet-based codecs target “Visually Loss-Less” quality. With that objective in mind, lowering the bitrate is only allowed as far as the pristine original content quality is not affected. 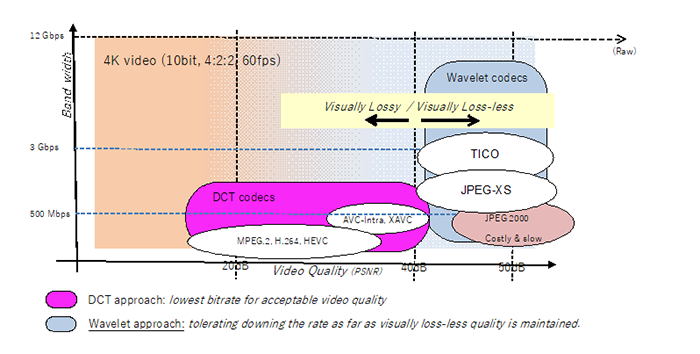 Both JPEG-XS and its sibling codec TICO, enable visually loss-less (PSNR> 40dB) video quality at reasonable compression rates such as 6:1 for TICO and 12:1 for JPEG-XS. From experience, we see JPEG-XS achieving the same visual lossless video quality as TICO at less than half the bitrate. By visually Loss-Less quality, we mean that human eye cannot perceive any difference between the original and the recovered content in normal professional viewing environments. Furthermore, if a viewer were to pause the resulting video after decoding and zooming into it as much as possible (for example: Zoom x40~x60), it would still be nearly impossible for the viewer to detect any difference when compared with the original content.

When setting the JPEG-XS encoder with compression ratio such as 12:1, it is possible to bring down a 4K live stream bitrate below 1Gbps without suffering in quality and delay. At sport venues, a 4K camera video signal can be sent individually to the 4K OB van on a single cost 1GigE link, or IP-muxed over a 10G link cost-effectively and conforming to the ST-2110 standard. Thanks to the ST-2059 (PTP) support by VICO-4L-XS and other network switches, all feeds can be received, processed, and switched synchronously inside the OB van or at the geographically distant Broadcast Station. The same stream can be sent to distant site for public viewing. VICO-4L-XS can host two channels per 1RU which can be set independently as encoder or decoder, enabling the return monitoring channels for cameraman and OB van operators. Thanks to JPEG-XS, OB van operators can reencode the stream after switching edition, without suffering quality degradation.

VILLAGE island is based in Tokyo with international activities including distribution, integration, development, and services. With its dedicated team and network of qualified professionals, “VI” offers a full range of hardware and software technologies, highly integrated, flexibles and known as cost-performing solution for all broadcast and streaming needs.

VILLAGE island typical customers are broadcast/telecom operators, TV/Radio stations, system integrators, HE equipment and STB/TV manufactures. VILLAGE island disposes of a wide customer base with more than thousand systems deployed. The reason of this success lies in VI’s engineer mind and spirit of teaming-up with customers, with a focus on delivering practical solutions to concrete needs. For more details, visit our website: www.village-island.com