Simplestream – Content that moves fast, live and on demand 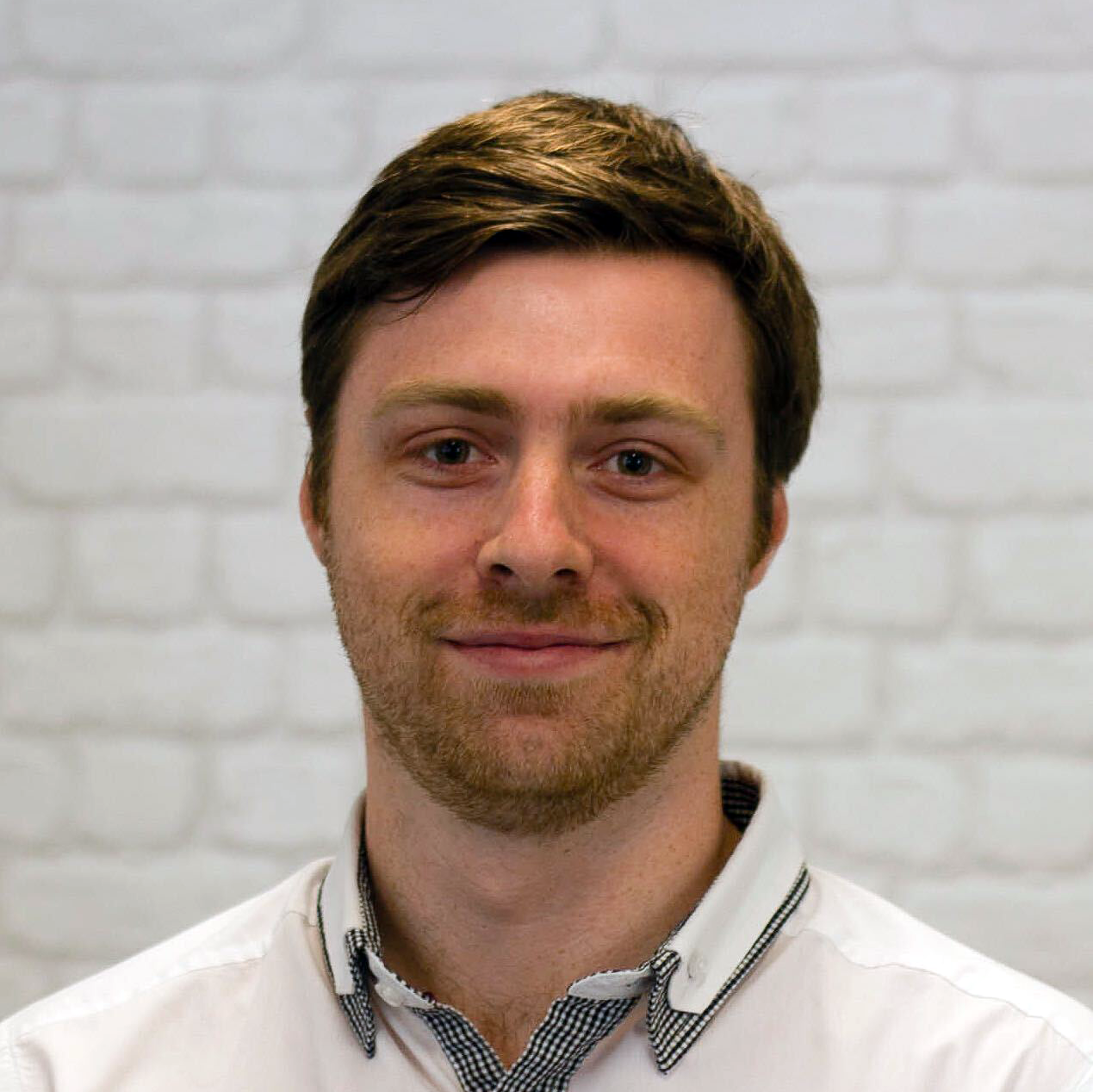 Content is king. Even more accurately, video content sits at the throne, being the most valuable asset for broadcasters and media brands of all kinds and sizes. Made to be distributed, consumed – and most importantly – monetised, video travels fast from creator to end-user, stimulating OTT and streaming players to adopt creative and efficient operational workflows, corroborated by best-in-class solutions and tech stacks.

At Simplestream, in over a decade of research and development of architectures that simplify the inner complexity of OTT, we have embarked on the most exciting journey across the cycle that takes content from live to on demand (Live2VOD, VOD), to distribution - in real time - of the same video assets through linear playout (VOD2Live). Bearing in mind the demands that the orchestration of such workflows naturally creates, Simplestream has developed a best-in-class solution to allow any stakeholder in the content space, to leverage their existing VOD content to create ‘live’ linear channels, with optional adverts and a seamless playback experience. 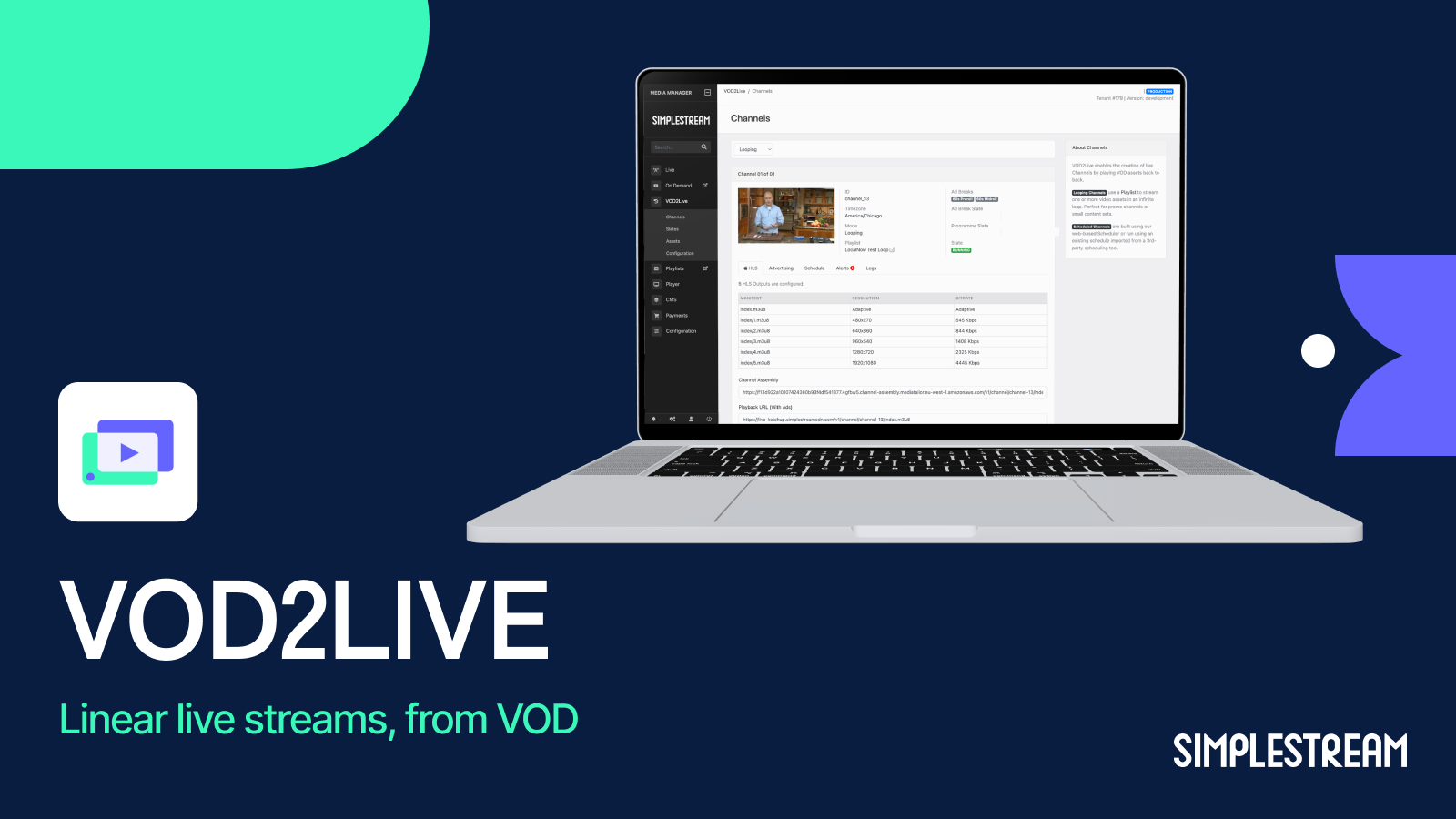 VOD2Live brings a number of unique differentiators to the OTT and streaming sector, among which is the possibility for operators to choose the preferred distribution model for their newly created channels: a free ad-supported television (FAST) channel, a virtual channel enriched by data-driven dynamic graphic overlays, a ‘pop-up’ channel, a barker channel for seamless loops of advertisements, and so on. Think of a Christmas-themed channel for children's content that is solely focused on festive episodes or films at that time of the year. Pop-up channels also have a similar appeal in that they could be used periodically to showcase trending or popular content that is relevant to a specific audience.

Built on the foundation of Media Manager, Simplestream’s proprietary product for the management and distribution of content, VOD2Live presents the operator with a simplified interface to manage the workflow. Once the content is created and the initial packaging stage is complete, VOD assets are assembled into a playlist. Channel creators can easily see the schedule and electronic programme guide for the coming days including ad breaks and playout times. The breakpoints are presented as SCTE-35 markers within the live stream for the optional insertion of advertisements. These can be placed at the start and end of the video, or throughout its duration, according to any mid-roll rules. Once assembled, the playlist is submitted to be turned into a channel, by using AWS’ solution, MediaTailor. Simplestream provides the schedule and references to the video assets, MediaTailor normalises the content and turns it into a linear stream, using channel assembly. 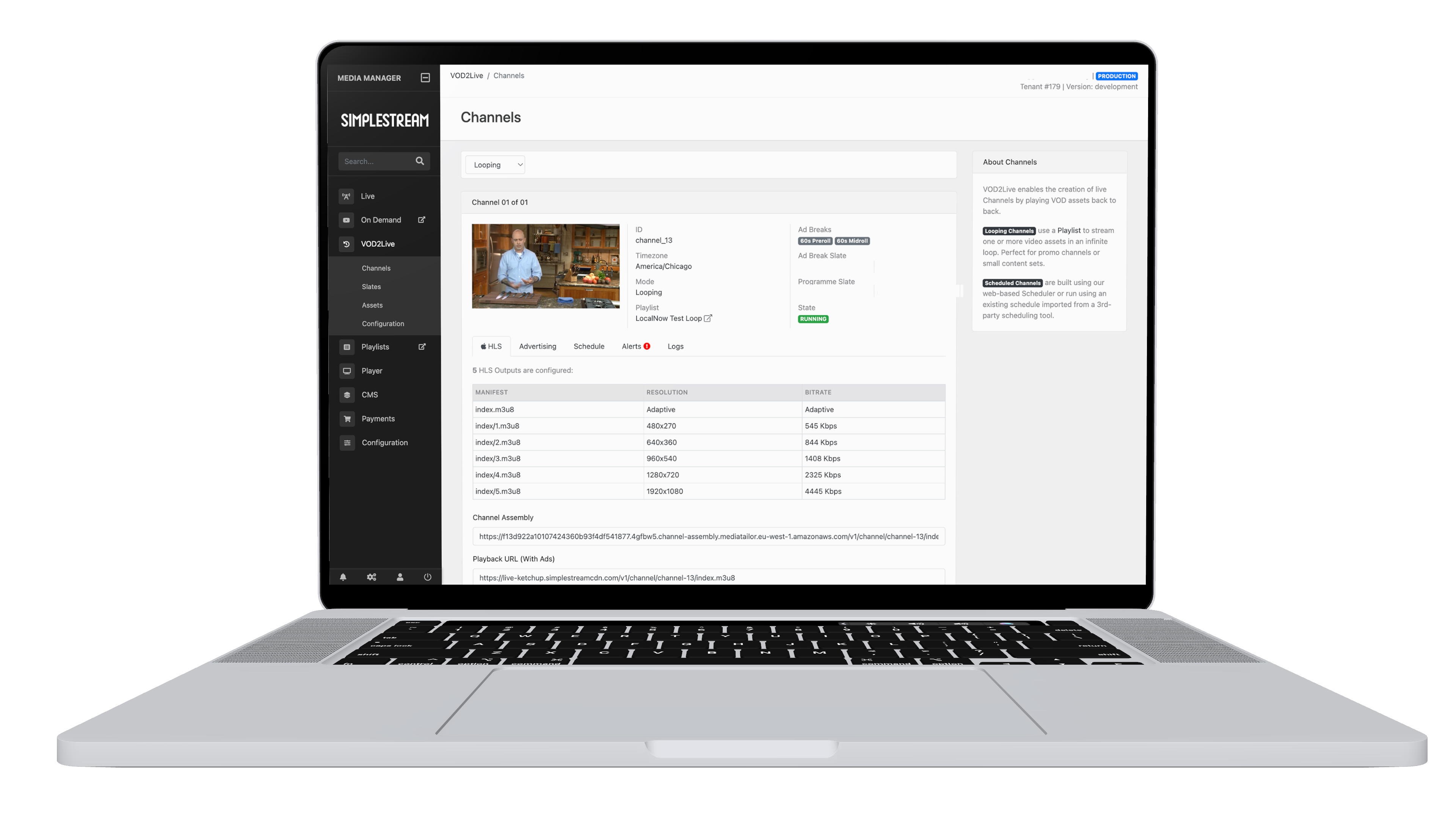 A VOD2Live-powered channel becomes a broadcast channel through the easy-to-use scheduler (controlled via Media Manager). Channels can be built as thematic, genre-, or series-based, complete with ad slots and slates. Looped channels are created through content that’s scheduled on a variable loop (1-to-24 hours), using a web-based playlist interface. Scheduled channels, instead, use XML/JSON/MRSS/Excel external playout schedules to automatically generate playout for distribution of content.

The streaming of channels happens with an out-of-the-box Content Delivery Network (CDN) – or any other third-party. Channels are distributed through a variety of applications (web, mobile, tablet, HbbTV, Smart TV, and consoles), with Live and EPG views. VOD2Live streams are available in HLS and DASH formats, while linear EPGs are created automatically from the channel, ready to be utilised on the platforms of choice. Further opportunities to enlarge a channel’s footprint are made available by 20+ syndication connectors that leverage Simplestream’s Syndication module, via XML, JSON, and MRSS. 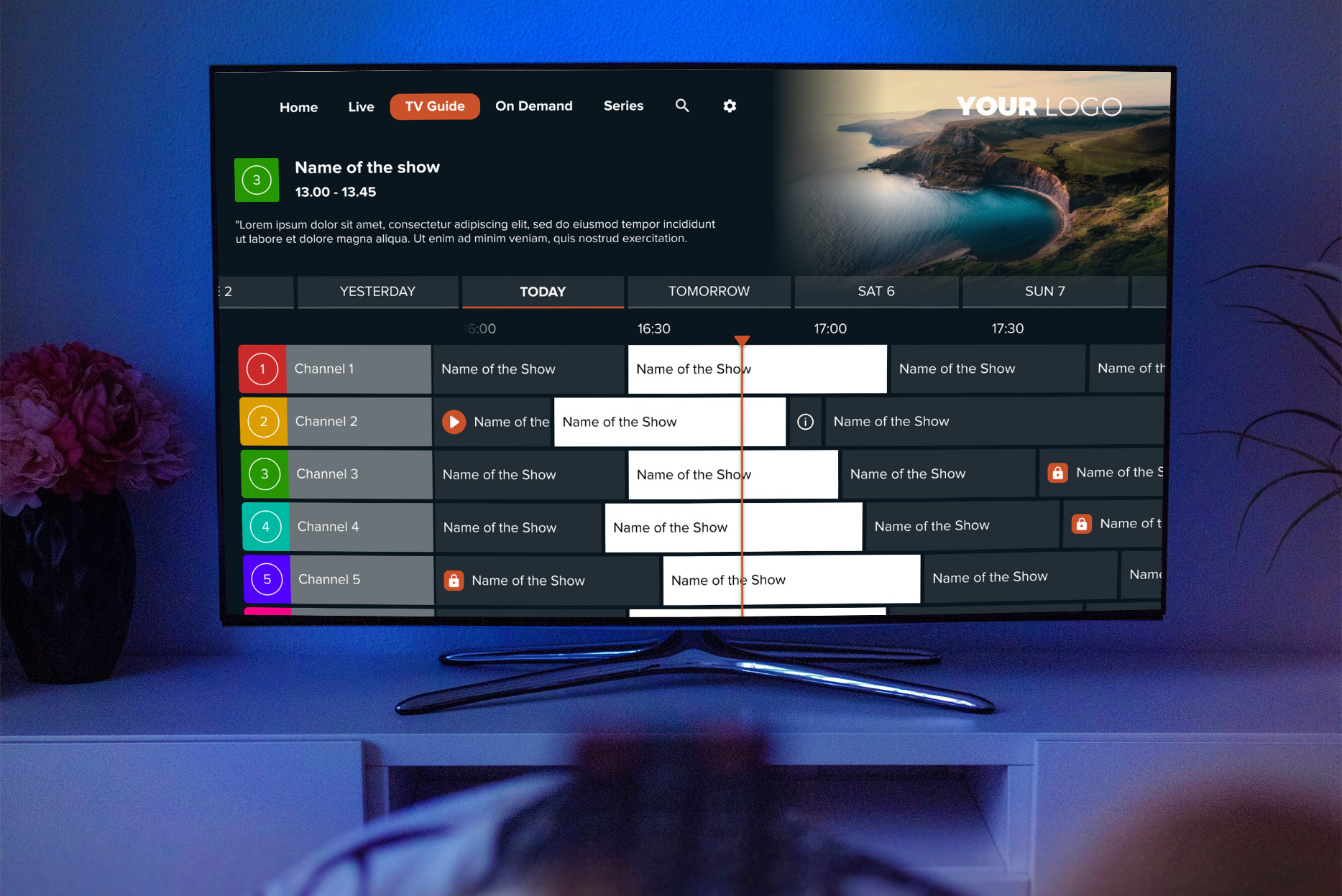 Monetisation is made possible with personalised ad content – delivered via SSAI – that allows operators to seamlessly serve unique ads to each user, without limitations. No SDK is required, the module supports VAST, VPAID, and VMAP tags, setting any compatibility concerns aside with an ad server-agnostic approach. Personalised key-values and consent management platforms (CMP) are supported, out-of-the-box. Granular details are available with the device ID for Apple’s Identifier for Advertising (IDFA) and Google Advertising ID (GAID), including users’ GDPR consent string, content ID and more. SSAI insertion can be completed as part of the AWS MediaTailor implementation, or the SCTE-35 markers can be passed downstream to have ads inserted by third-party providers.

Innovation at the core

Virtual channels can further be enriched by data-driven dynamic graphic overlays, a powerful way to deepen the end-user experience with additional layers of information on top of the video content. The feature is ideal for teleshopping channels, the broadcast of sporting events, as well as faith channels, pop-up themed channels, or even barker channels for seamless distribution of advertisements.

A VOD2Live channel can be deployed in under 48 hours for operators who already own Media Manager. For new customers, onboarding must occur prior to channel deployment, with a ‘go-live’ timeframe of two to four weeks.

Among the most exciting developments on the horizon is certainly the possibility to integrate actual live event feeds alongside the on demand assets that are commonly utilised to power the ‘live’ linear channels. Think of a traditional broadcast channel and how that operates, yet at a fraction of the cost. Live events can be shown on a channel with additional SSAI, responding to the need for enhanced revenue generation of content owners, in the same timeframe as a traditional linear broadcast channel. With the added benefits of reduced time-to-market, and the opportunity to scale quickly across multiple target audiences.