The Switch powers delivery of One World: Together at Home 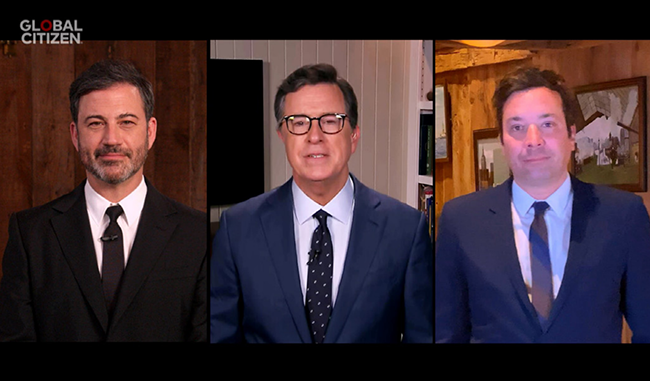 ■ Organizing the first and biggest global event during the COVID-19 lockdown, Global Citizen needed the One World: Together at Home broadcast to faultlessly reach
networks and channels in the US, Canada, Latin America, Europe, Asia Pacific and other markets
■ Working on a tight timeline, Global Citizen turned to The Switch for its extensive experience and expertise in live event delivery to ensure the ‘as-live’ show, in support of frontline healthcare workers, would come off seamlessly
■ The Switch was tasked with delivering the ‘live to air’ broadcasts, incorporating pre-recorded performances and interviews with Lady Gaga, Taylor Swift, Elton John, The Rolling Stones, Billie Eilish, Paul McCartney and many more once these were assembled at Sim’s post-production center in Hollywood

■ The Switch handled ingest of the US domestic and international shows; playout for pre-feeds and the ‘live to air’ broadcast shows; critical domestic fiber and satellite in North America; and international fiber and satellite distribution to EMEA, APAC and South America.
■ Provided temporary HD-SDI connections from Sim to The Switch Los Angeles and AT&T’s Hollywood Hub
■ Made sure the broadcast reached networks across the globe, including ABC, CBS and NBC in the US, CTV and TSN in Canada as well as Canal+, Sony Pictures-Latin America, Sony Pictures-India, RAI Italy, TVE-Spain, NOVA-Bulgaria, Dubai-TV, Rede Globo and many others internationally
■ Versions of the show were also streamed on a wide array of over-the-top services, with The Switch delivering the feeds to Vista Worldlink in Miami to encode and distribute them globally

■ Leveraging The Switch’s production and delivery capabilities, One World: Together at Home reached 270 million viewers worldwide
■ Hosted by US late-night network presenters Jimmy Fallon, Jimmy Kimmel and Stephen Colbert for the US domestic program and many international feeds, the event made headline news across the globe
■ Celebrating those fighting COVID-19, the show did not solicit donations on air but still raised $128 million for coronavirus relief efforts – split between World Health Organization and other charities