What makes JPEG XS technology different from other codecs?

Let’s have a little talk with our expert in compression technology, Antonin Descampe !

Antonin Descampe is co-founder of intoPIX and member of the JPEG committee since 15 years.

During an interview, Antonin explained us how the JPEG XS technology differs from other codecs & what are the advantages of JPEG XS compared to other existing codecs.

Antonin, could you explain us what is JPEG XS and how does it differ from JPEG 2000, Motion JPEG and various MPEG standards ?

or complexity, JPEG XS  addresses the following question: “How can we ultimately replace uncompressed video?”. The goal of JPEG XS

No other codec fulfills this set of strong requirements simultaneously. It can thus “compete” with uncompressed in every aspect and reduce bandwidth / video data significantly. 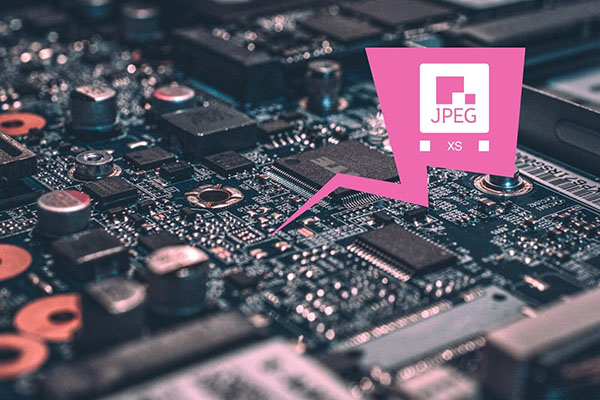 Antonin : In a nutshell, we can say that the typical operating points for visually lossless quality with JPEG XS are around 10:1.

However, it is important to take resolution and content type into account when identifying a maximum compression ratio. For instance, natural content usually reaches higher compression ratios for a given quality level.

Based on our tests, including different kinds of content (screen content, Computer Generated Images (CGI) and natural imagery), we defined the following table. The lower compressed bitrate in the table defines use cases playing with natural content typically while the upper range defines more complex content or use cases requiring full visual transparency.

JPEG XS is specifically targeted at high-end video applications, such has broadcasting, broadcast contribution, virtual reality applications, etc. Why JPEG XS and not H.264 or H.265?

JPEG XS has a much lower complexity than any inter-frame codec like the MPEG ones. It leads to much cheaper implementation, a tiny FPGA footprint and there is no need to store frames in an additional DDR. It also has a more balanced complexity between encoder and decoder, making it more suitable for environments where you have the same number of encoders and decoders. MPEG-4 AVC / H.264 encoders are much more complex than the decoder.

There is also a huge difference in terms of power consumption. MPEG-4 AVC / H.264 and HEVC / H.265 require a lot of memory due to their inter-frame / GOP-based scheme. Thus, they would never be used for reducing power consumption / interfaces within an electronic device, as they are highly complex and use lots of power by themselves already. JPEG XS does not require such memory since it’s a line-based compression technology.

In terms of latency, using MPEG-4 AVC / H.264 and HEVC / H.265 in a live production workflow with multiple encoding & decoding steps would lead to a compiled latency of many seconds. JPEG XS has a microsecond-latency and can thus be run throughout a whole live production workflow without even inducing the latency of a single MPEG-4 AVC / H.264 encoding-decoding step. Even though we need H.265 for the last mile to distribute it to the consumers, we try to avoid any additional latency in the production workflow before distribution. Aside broadcast, applications that JPEG XS targets need real-time transmission, such as autonomous driving systems, KVM extension, VR/AR gear, … A delay of > 100 milliseconds would make these applications unusable (or in case of an autonomous car even lead to a crash). JPEG XS stays well below this measure at < 1 millisecond for combined encoding and decoding.

In fact, JPEG XS not only targets high-end video applications, but is suitable anywhere where uncompressed video is currently used and needs to maintain high quality levels, while wanting to gain efficiency – and who wouldn’t want that? Hence, there is also a  great focus on consumer electronics such as mobile devices, cars, TVs and other screens, etc.

What is the status of the JPEG XS standardization process ?

Antonin : Concerning the status of the standardization process itself, JPEG XS Part-1 (Core Coding system), Part-2 (profiles and buffer models) and Part-3 (Transport and container formats) are published and available online as International Standards already. Part-4 and Part-5 (respectively conformance testing and reference software) are in final stage and shall be published during Q2 this year.

While Part-1 relates to the actual compression algorithm, Part-2 defines several profiles that can be seen as operating points suited for particular applications or content type. In Part-3 and in other standardization activities, various file formats and transport formats are specified, allowing to store or stream one or several JPEG XS code streams (see table hereunder).

Recently, a new activity has been started within the JPEG Committee : a first amendment to Part-1 and Part-2 specifying additional coding tools dedicated to compression of Color Filter Array (CFA) data, mostly known as Bayer patterns. These new tools will make JPEG XS even more suited for use cases involving image sensor data compression, like the ones found in the automotive industry or in professional cameras.

Besides this process, there are several ongoing liaisons between standard bodies and industrial organizations such as AIMS, VSF, SMPTE, TICO Alliance, IETF, etc. At the last IP Showcase at NAB there was a presentation about JPEG XS in ST2110-22. Several broadcast suppliers are already working on implementation within their upcoming products.

Thank you Antonin for all this great explanations !