DejaSoft – from editors to editing game-changers

We spoke to Nikolai Waldman, CTO new IABM Start-Up member DejaSoft (www.DejaSoft.com), about what inspired him and fellow founder, Clas Hakeröd, to venture beyond running an established, successful post production business into setting up their own technology company, and talked about the challenges and opportunities this has opened up for these two entrepreneurs.

Give us an overview of what inspired you to set up your own company – where do you see the opportunity in the market, and why?

I think I was destined to be proficient at languages including programming lingo, from the very beginning. I was born in Amsterdam with a Dutch father and German mother and moved to Sweden in 1985 where I have lived ever since. I enjoyed an incredible year at the prestigious Full Sail film school in Florida where I developed a passion for entertainment and media technology in real-world industry environments and came away with creative problem-solving skills that have come in useful throughout my career.

DejaSoft is a collaboration between my business partner Clas Hakeröd and me. We also own a successful boutique post facility called CAN Film based in Gothenburg. We are both established editors and post-production professionals in our own right, with over 30 years of industry experience behind us. As editors ourselves, we fully understand what post-production professionals require in order to work more efficiently.

I have always written small programs from time to time that help me in my job as an editor and colourist. For example, I developed Resolve Collect, which is a Media Manager for DaVinci Resolve. Developing does come naturally to me, but I was not aware that we would end up creating DejaEdit.

DejaEdit is described as a unique collaborative editing solution for Avid Media Composer, Avid Nexis and EditShare workflows and acts as a powerful media file synchroniser for multiple remote Avid systems. The applications and advantages of DejaEdit are vast and include allowing multi-site post facilities to work as one, empowering multiple remote editors to work together, exchanges of media with VFX houses, as well as enabling editors to easily migrate between office and home or mobile-based editing installations throughout the lifecycle of an entire project.

DejaEdit’s conception began back in 2014, when we were working on a TV-series called ‘The fat and the angry’ by director Johan Renck. It was shot in Gothenburg and edited in Stockholm. This project kick-started discussions that prompted Clas and I to further explore whether there was a better way to transfer footage to the editor, other than just sending physical hard drives across. It was at that stage that I started working on designing an application that would, in essence, create a workflow, where we could send offline files directly into the editor’s Avid Media Composer. We then founded DejaSoft, and DejaEdit was born as our main product, which we started developing further while working on projects at CAN Film.

During the development process over the years that followed, we used DejaEdit on many projects where CAN Film was handling the post workflow. This way, we could also find bugs while we managed the post-pipeline and could get feedback from editors using the software. Once we were fully satisfied that the product was successful and worked well in all scenarios, we decided to formally establish DejaSoft and introduce it to the market. We worked extremely hard to achieve the status DejaEdit enjoys in our region today as a robust and reliable solution. We now feel the time is right to share DejaEdit with the rest of the world and we want editors everywhere to fully enjoy its benefits across the globe.

Award-winning post-production professionals are already using DejaEdit on notable film projects and benefitting by being able to work from practically anywhere in the world, including the most remote areas. A few examples include the likes of Oscar Award-nominated editor Yorgos Mavropsaridis, ACE of ‘The Favourite’, ‘The Lobster’ and recently ‘Suicide Tourist’. Well-known Scandinavian producer and production manager Daniel Lägersten at B.Academy noted that DejaEdit is a game-changer and he has produced popular TV series such as ‘Riverside’, ‘The Befallen‘ and ‘The Spiral’. Editor Rickard Krantz, s.f.k. used DejaEdit in the ‘The Perfect Patient’ (aka ‘Quick’) which was nominated for Sweden’s Guldbagge award for Editing (similar to a BAFTA).

Post-production producer Anna Knochenhauer used DejaEdit on many projects, and she is known for her work on ‘Euphoria’ featuring Alicia Vikander; ‘The 100-Year-Old Man Who Climbed Out the Window and Disappeared’, ‘Lilya 4-Ever’ and ‘Together’.

Other high-profile film projects that have recently involved the use of DejaEdit, include ‘The Inner Circle’ with editors Pierre Laurent & Andreas Hay Johnsson; ‘White Wall’ with editors Sami Heikkilä and Kristofer Nordin; and ‘Conspiracy of Silence’ with editor Darek Hodor, and many more. 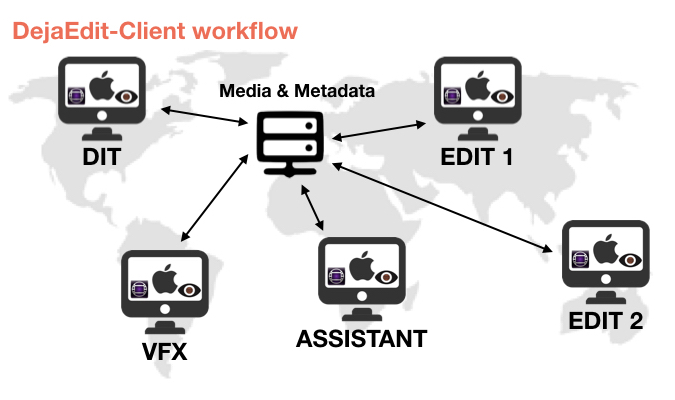 What are the most rewarding aspects of launching a new company?

It is very satisfying to see that an idea that we had many years ago, now being promoted on an international level and embraced throughout the world.

What challenges did you face in getting started?

One of the biggest challenges we have been facing is that there are no other products out there that are like DejaEdit. Many producers are afraid of using new technology, so a lot of time has gone into convincing them that DejaEdit works and has been tried and tested on real-world projects. We found that once a new client has tried DejaEdit out, and has been able to experience the advantages first-hand, they very quickly come back for more and have evolved into some of our most loyal customers. We just need people to be aware that it exists, give it a go, and they will be hooked.

With over 1500 vendors jostling for attention at major shows and in the press, how have you set about getting noticed by potential customers?

We are using Carole Cox’s agency Radiance Communications. Radiance helps us with communication strategies, press relations, and provides advice and guidance in many areas. We also sponsor and attend key industry events and will be attending NAB as well as having a booth at IBC this year to demonstrate the wonders of DejaEdit. We are also involved in many festivals and regional events and keep abreast of trends. We are relying on our association with IABM to also hold us in good stead, make introductions and put us in the spotlight, which will be a great help when jostling for attention at major industry gatherings such as NAB.

We are confident that DejaEdit will drive substantial future growth, lead into new regions and open up further innovative product development opportunities.

We are open to financing opportunities to speed-up our marketing and development process. We are hoping to find commercially astute technology and reseller partners who can help us navigate the market and help us strategically sell DejaEdit software worldwide.

It has already been an exciting start to the year, and we expect DejaEdit to appeal to many international editors, studios, producers and post supervisors who are looking for an affordable film tool that is both cost-effective and time-saving.

We are already working on the next version of DejaEdit (Version 3.0), which will include new features that clients have requested, due for a late spring release. DejaEdit will be presented for the first time at NAB 2020, including a sneak preview into Version 3.0 with highlights that include ‘Private’ and ‘Global’ bin sharing and many other helpful features that facilitate media file transfer across large media projects.

We have a booth secured already for IBC 2020, where we plan to showcase the DejaEdit workflow in all its glory. These shows play an important role as it provides us with valuable feedback to help us further develop and improve on every aspect of the product to benefit users.

You have used DejaEdit in many of your own client projects at CAN Film – can you give an example of how it delivered efficiency?

One of the projects we worked on at CAN Film that stands out was the TV-series ‘Conspiracy of Silence’, which was shot in Lithuania and edited in Sweden. When we looked at the time between when the scene was shot and when the editor Darek Hodor could start editing, we were quite surprised. One and a half hours after shooting, he had the synced footage and could already start editing. He was able to send the edited timeline back to the director, by just simply dropping it in the DejaEdit ‘ToSet’ folder. The director was then able to watch the edited scene on the DIT station literally minutes later. Using DejaEdit, they always knew that all the shots for the scene were secured.

Based on your experience, what key pieces of advice would you give to someone considering starting their own company in the media technology business?

I would say that you have to make sure that you have an idea that is not only beneficial and helpful, but also unique. These factors will help your product or service stand out. It is vital that you have a stable product before launching though, as you will not get a second chance.

You have taken advantage of IABM’s Start-Up membership package. Which will be the most useful services to you, and why?

There were many reasons that motivated us to apply for IABM membership. IABM’s rates are very reasonable for our DejaSoft Start-Up, and we are very impressed with the resources and support at events such as NAB and IBC tradeshows that the organisation offers its members.

We also appreciate the fact that our news releases will be circulated across all IABM channels which we hope help give us additional visibility. I also feel that being a member of IABM gives us a kind of ‘quality assurance’ for our customers.

As it is a critical time in our growth and development as we ‘go global’, we are now fully ‘investor-ready’ and ideas-rich and therefore there are immense opportunities on the horizon. We fully welcome offers and are seeking new partnerships and ideas.

We are confident that IABM, with its extensive influence and business acumen, can help us provide the industry with a better understanding of our product. We are proud to be associated with a well-respected industry body and look forward to a fruitful partnership.