With more people watching films and episodic TV drama on streaming services such as Netflix and Amazon, OTT is coming ever closer to dislodging linear television as the dominant vehicle for video and media distribution. Mediaproxy chief executive Erik Otto outlines the technological challenges of this and looks at why monitoring streamed outputs is crucial to guarantee the viewing experience.

OTT services came into their own at the height of the Covid pandemic, providing streamed entertainment directly to people locked down in their homes. In reality, this was an acceleration of what had been happening in the years prior to 2020 and boosted the already growing popularity of streaming.

Originally, OTT was promoted as a video-on-demand (VoD) service that enabled viewers to catch up on TV shows they had missed. This model of streaming was expanded upon by the likes of Netflix and Amazon Prime to offer a large, readily accessible library of films, TV dramas and comedies shows. This was further enhanced with the addition of Ultra HD/4K HDR visuals and Dolby Atmos immersive audio to create a viable and compelling alternative to linear digital terrestrial television (DTT). Netflix and Amazon have since been joined by Disney+ and AppleTV (which added 4K capability earlier this year), with Sky in the UK dropping dish reception in favor of streaming through the new Glass TV. VoD streaming, for both TV-style viewing and catch-up, is set to continue growing in the coming years. Many services are likely to be hybrid platforms based on subscription models (SVoD) but with the option of being ad-free. There is also an increase in demand for advertising-based VoD (AVoD). This offers free access to content with commercials and is popular in countries where mobile phone networks are the main forms of transmission rather than fiber circuits.

This form of delivery will increase as 5G roll-out continues round the world, offering low latency streaming and the ability to connect several different devices. Network operators are also likely to take advantage of what the new technology is able to offer, as are traditional broadcasters. With streamed viewing now increasingly on an equal footing with linear broadcasting as the main way people watch video, the mainstream channels will launch their own OTT platforms, either independently or in conjunction with production companies and content owners.

The key selling point for VoD is quality of content but that should apply to the audio and visual standard as much as the excellence of the programming. That, coupled with more channels available to an ever-increasing number of platforms and devices, demands efficient and comprehensive monitoring of the streams to ensure both regulatory compliance and delivery to the right destinations.

Audio and video need to be tested as they pass along the distribution chain and through CDN (content distribution network) edge points. Due to the number of streams involved, this is a massive undertaking, made more complicated by the fact that attempting to monitor streams only in a standard master control room (MCR) does not make much sense in the multi-stream, multi-channel world. Ideally, monitoring should happen at every point along the chain but in the OTT realm, controlling the material is difficult once it is being handled by the big service providers. 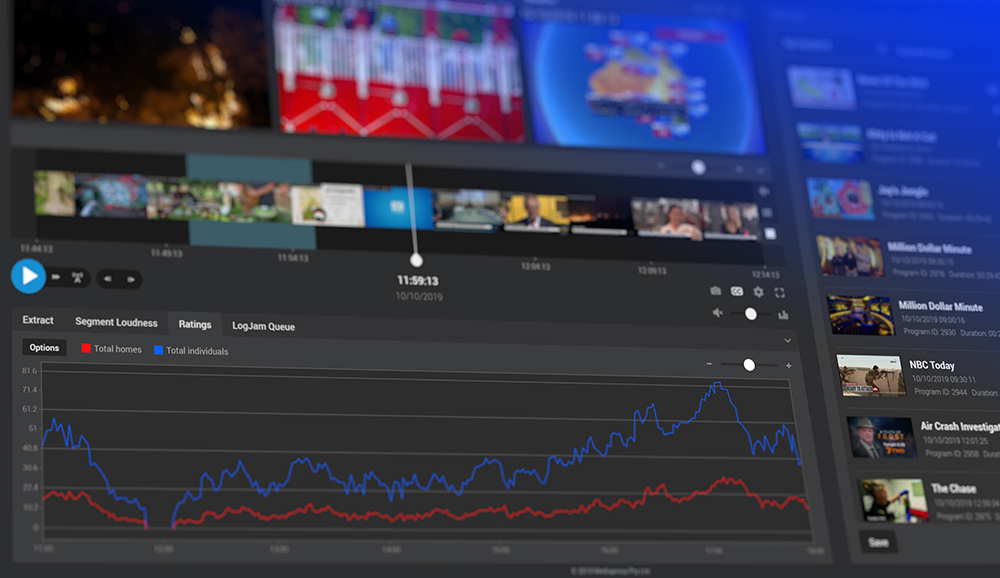 As a result, the MCR of a broadcast or playout center is no longer the final point for quality control. Video and audio have to be examined as they travel along the delivery path via CDN edge points and undergo various processes, including targeted ad insertion, multi-language selection and event-based transmission. It is crucial to fully manage this ever more complex process, which now requires logging and compliance checking.

Monitoring the whole distribution path called for a brand new methodology. The aim is to go back to the more traditional system of starting with content 'off air' at the broadcast or playout center by creating something that can be virtualized and customized for individual requirements. Established detection methods, including time and date searches and predefined metadata, are still valid and used widely. But using more sophisticated software-based techniques, such as watermarking and fingerprinting, operating under automated computer control, is now practicable.

Due to the high number of OTT channels, many of which use adaptive bit rate (ABR) techniques, to be monitored, using display panels is no longer practical. There are now many devices and delivery platforms to monitor but viewers expect broadcast quality and the level of service to be the same as what they have been used to. Mediaproxy's LogServer compliance monitoring and analysis platform is able to check not only that the content of programs and commercials conforms to regulatory requirements for quality - including picture consistency and audio loudness - but can also assist in collecting information for targeting commercials at a particular audience.

The goal of broadcasters or content owners in today's extremely diversified and competitive OTT market is to ensure content is delivered to the quality laid down by regulators, with programs passing through the CDN to devices and platforms in the correct format. Mediaproxy's technologies provide real-time monitoring of the output program so the broadcaster can be confident that what is being sent is correct in terms of both content and compliance.

Today, the business of monitoring outgoing channels is moving away from operators in the MCR looking at display screens and being replaced by an exception-based methodology. Modern MCRs will instead have multiviewers, such as Mediaproxy's Monwall, which only brings up a channel when something is wrong. The operators are then able to isolate any problems and deal with it using the tools provided by a compliance system like LogServer.

The advent of OTT has given people the freedom to watch anything wherever they are and whenever they want. Because of this technology developers, including Mediaproxy, have had to come up with new ways to make certain that the many streams now available meet the expectations of both viewers and regulators. This is an ongoing process and one that will continue to evolve as streaming becomes more dominant in the media world.