EMG (Euro Media Group) are a leading global provider of broadcast services and media solutions for live sports, entertainment and events across the world. With 35 years of experience in the industry, and a team spanning ten countries, EMG’s expertise sits at the heart of many of the world’s biggest productions, including the Tour de France, Football World Cup, Formula One, Eurovision and X-factor.

EMG’s core business proposition is the ability to deliver productions from events across the world, making use of remote and now, increasingly, distributed production setups. In 2017, it became clear that reliance on legacy SDI systems would be prohibitive in achieving the company’s goals, and that a move to IP constituted the next logical step; allowing EMG to yet further reduce the amount of equipment and personnel which needed to be transported to remote sites. Not only would this represent a key element in reducing associated production costs, but more crucially, it would also support EMG’s environment and sustainability goals – reducing the carbon footprint associated with the transport of kit and people: a factor of importance for both EMG and their clients.

A further benefit of the distributed production abilities facilitated by IP relate to the past year’s need for socially distanced production – a concern which may prove to have ongoing relevance in the field of broadcast for some time to come. IP allows for production professionals to work in their own specialized environments, in real-time, without needing to coordinate within a single OB van or on-site studio.

In addition, a key element of EMG’s success is a focus on creative vision; delivering the excitement and emotion of live events to viewers across the world. This means that the technologies which they chose to implement would need to be able to deliver the highest level of performance; reliably and in a way that does not increase complexity or learning curve for those implementing and configuring the system on projects.

At the heart of EMG’s growth would be the ability to create a solution that allowed them to implement IP-based production across the entirety of their operations in a modular, flexible, reliable and cost-effective manner. 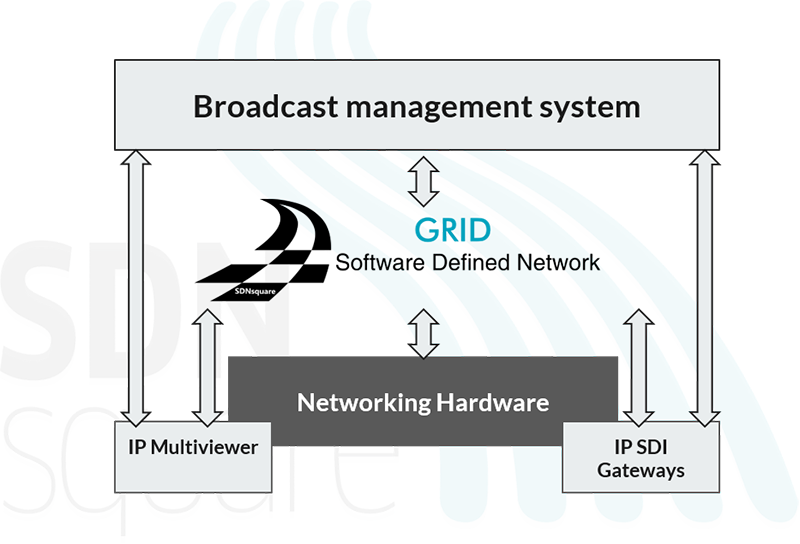 With the above factors in mind, EMG developed the diPloy system,  based on an ‘Anywhere, Anyway, Any size’ concept, which would sit at the heart of their live remote production and video editing offerings. The diPloy system – a modular, standardized, scalable and flexible IP platform, was imagined back in 2017; a progressive approach at the time considering the complexities that existed regarding the homogenization of standards.

Key to EMG’s ability to achieve success with diPloy would therefore be the ability of vendors who were contributing components to the system to integrate the relevant standards and protocols of each modular element, correctly and on time. In particular, EMG were determined to have the system fully functional for the major sporting events of 2020. However, with the inevitable postponements that the COVID crisis brought, it was the 2021 FIS Nordic World Ski Championship in Oberstdorf which provided the ideal opportunity for EMG to showcase diPloy’s abilities. 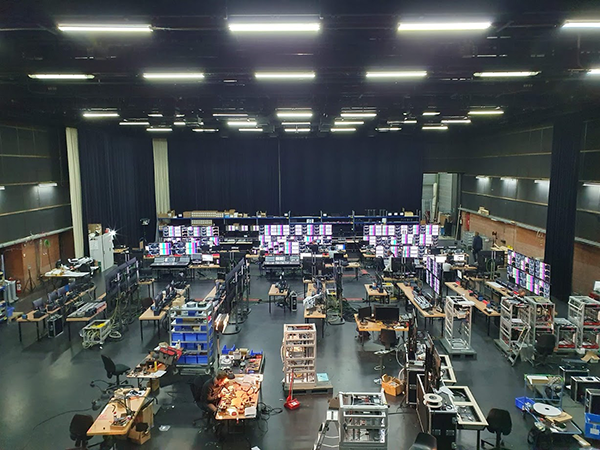 In identifying a suitable strategic partner, EMG looked to SDNsquare to coordinate their IP system through deployment of the GRID Network Controller; a Software Defined Network controller which guides the path for all data-streams and creates predictable, low latency flow.

The key outcome facilitated by GRID is the predictable and optimal management of the network, providing for reliable, real-time production operations which are not disrupted by data transfer issues or blockage – using intelligent management to deliver predictable and reliable data flow.

Moreover, GRID works towards facilitating quick and automated configuration of an IP infrastructure in accordance with the needs of each of EMG’s projects, accommodating modular and scalable setups, and using an interface and approach to configuration that is intuitive, easy to learn and based on WYSIWYG representations of network entities. 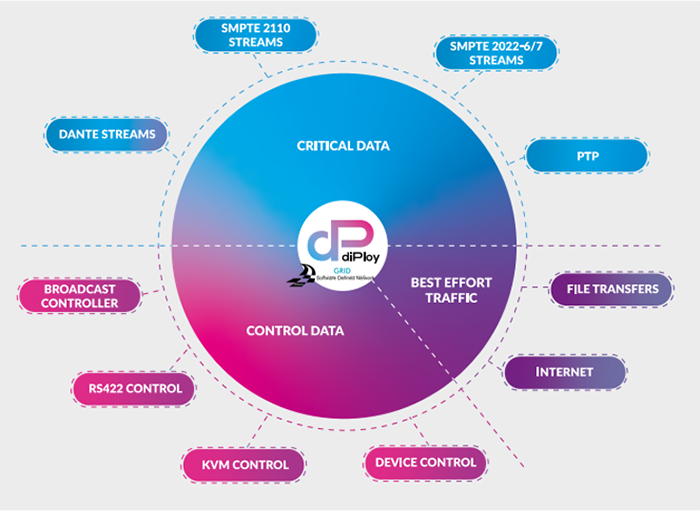 Within EMG, all traditional OB units are divided into individual modules – each with different functions:  Dedicated Audio & Comms-Modules, Video Switcher-modules, Replay-modules and Basestation-Modules. Tailboard Modules guarantee connectivity with the outside world. All modules are combined according to the Networked Media Open Specifications (NMOS) of the project and connected using SMPTE ST2110.

diPloy’s control software is designed around a Northbound and Southbound system. The Northbound Control is based on familiar broadcast control software, interfacing with the Southbound Controller that runs hidden in the background, communicating with switches and routers. This is powered by GRID; guiding the path for all data-streams to facilitate the above-mentioned predictable low latency data-streams which are crucial to the ability to engage in distributed live production.

The key advantage facilitated by GRID is that it allows for this to occur even in a many-to-many environment, using a redundant MESH network rather than the traditional IT-based spine-leaf approach. This allows for an unrivalled level of operational flexibility; accommodating more than 250 switches and close to 2000 end devices, whilst monitoring, detecting and rectifying cabling and address allocation issues, all through the use of a fully location-based DHCP server. 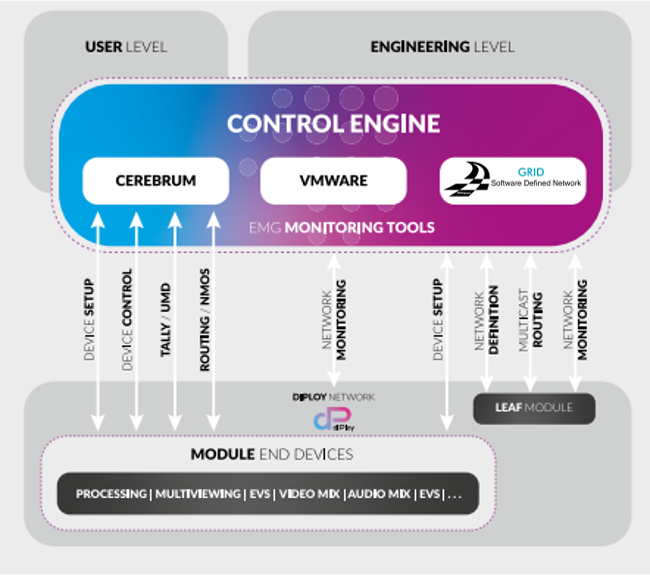 SDNsquare’s GRID has been involved in helping EMG to realise their diPloy vision, and thus working towards the benefits associated with IP-based production. More than simply facilitating a ‘straightforward’ IP setup though (a challenging enough undertaking in its own right), SDNsquare have provided a solution which will allow for a straightforward, frequently automated approach to network setup and facilitates complex, scalable and flexible configurations. In this way, EMG can adopt a modular approach their operations, setting up diPloy in accordance with the specifications of each given production project.

The result is a production environment which gains all of the benefits of IP – including future-proofing for UHD, HDR and beyond, which can be accessed and engaged with from anywhere in the world, in real-time. Even within a traditional production environment, EMG are able to benefit from the fact that an IP setup results in a significantly lower number of cables. This reduces what the German’s have helpfully named ‘Kabelsalat’; the tangling of numerous wires, since with the GRID powered diPloy, each production area requires only one cable core. This makes for a more streamlined, reliable, lightweight and safe working environment.

The central advantage for EMG has been the ability to more closely manage the costs associated with production; the modular approach meaning that technology deployment can be scaled to meet the size of the project, and does not need to be transported half way across the world.

In addition to the financial benefits though, EMG have also been able to meet their sustainability goals – both through the reduction of transport-associated carbon footprint, but also because when implemented with ToR switches, GRID can reduce the overall power consumption of a standard network by up to 45%.

Ultimately, the use of GRID has allowed EMG to deliver a better, more cost-effective, more reliable and higher value level of service to their own clients. This was proven in the field during deployment of the system at the Nordic World Ski Championships 2021 in Oberstdorf, where the client commented on the fact that EMG’s systems ran smoothly and without disruption, delivering the professionalism of production expected, whilst facilitating crew safety (through distancing), and operating in a challenging environment (namely, the snowy Bavarian Alps).

Speaking for EMG, CTO Bevan Gibson observed: “The key benefit of IP technology is that it allows the creation scalable, flexible systems which are easily capable of remote and distributed production workflows. The idea with the modular nature is that it’s fast to install, fast to prepare, very flexible in what it can do — and because the connectivity between modules is IP it’s far simpler than legacy infrastructure based on SDI. Whether it’s distributed locally across a couple of kilometres, or distributed to 5,000 kilometres away, the diPloy system utilising GRID, is designed to handle both operations.

Moreover, aside from the technical benefits that the implementation has realised for us, increasingly, our clients demand a solution for their event that is not only modular and scalable, but also environmentally sustainable. We strongly believe that nowadays, real innovation means reducing our ecological footprint – an idea that is echoed by SDNsquare”.

Commenting on their own role within the collaboration, Henry Alexander said for SDNsquare: “diPloy with GRID allows sports federations and sports event organisers greater opportunity to optimise the on-site resources necessary to deliver the highest quality of broadcast coverage, whilst also promising a more sustainable approach to broadcast operations”.