Game Over for Legacy Storage Solution

MSG Networks’ graphics-laden digitized media devours storage capacity, and large file sizes strain its system performance every time the content is uploaded, transferred, or edited in post-production. For years the organization relied on an Isilon array for nearline storage of the production video playback and ingest systems. Unfortunately the Isilon system’s performance was not easily scalable, and it wasn’t configured for live-video playback — something MSG Networks was actively planning to implement.

“We have a small engineering group to cover all of MSG’s abundant infrastructure and systems, which means we’re multitasking at all times,” said Raoul Edwards, Director, Network Systems Engineering and Field Ops. It was important that MSG had a storage system that could not only keep up, but also keep data management simple.

“We needed the storage equivalent of a reliable Swiss army knife, and unfortunately our old system just wasn’t cutting it anymore,” he said. 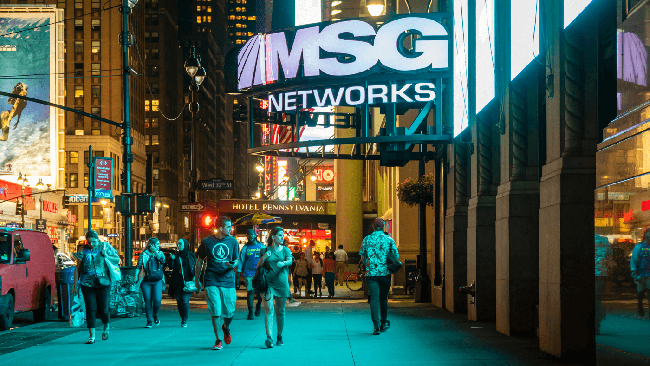 “As we grew our infrastructure into 10GbE, and now as we look at the 40GbE space, it was impossibly limiting to only have an SMB1 connection to our existing storage array. That caused a bottleneck for everything else at our facility,” Edwards explains.

As a result, the legacy Isilon NAS system was demoted to basic, ancillary storage, and MSG was left scrambling to find a new, modern solution for its production systems.

As the organization began its search for a storage solution to accommodate their growing requirements, three pieces of selection criteria stood out. The new solution had to easily scale capacity and performance, it needed a flexible and reliable design that could readily integrate into current and future workflows, and it had to fit into MSG’s limited budget.

“We looked at all of the ‘unknowns’ we frequently encounter on the job, and how we can better support unexpected demands on our data,” said Edwards. “Our old system was versatile enough to service those multiple workflows and data processes; we just needed to replicate that with a more modern file storage system.”

MSG Networks worked with media and entertainment solutions provider CineSys-Oceana to vet multiple options, including taking a serious look at new Isilon systems. Many of these scale-out NAS solutions were actually designed around a closed architecture that limited future scalability and flexibility and drove up costs.

“We need to be very strategic with purchases and equipment selections because we’re not going to be able to replace it again in two years,” said Edwards. “So when we were looking at storage options, we knew we needed to get as close to a ‘future-proof’ solution as possible.”

Visibility, scale, and control put Qumulo a head above the rest

The more MSG delved into their options, the more Qumulo emerged as the leading contender to fill the company’s storage needs. Qumulo’s software delivers fast, flexible and highly scalable file storage, together with real-time analytics that offer visibility into data usage and performance at petabyte scale.

Once MSG Networks purchased Qumulo’s file storage system, the deployment process confirmed that they had made the right choice. “We don’t have a lot of downtime to make engineering changes between seasons, and we’ve often got 30 to 40 projects queued up for that period. Qumulo’s pre-sales team was able to help us prepare up-front and work through any potential obstacles, such that the actual install itself was a breeze – something that happens way less frequently than we’d like it to,” he noted.

Timed to launch with the start of the year’s hockey and basketball seasons, the Qumulo cluster hit the ground running, acting as a central data storage repository working in conjunction with all of MSG Networks’ new post-production and media asset management software.

Integration has an important impact on MSG’s workflow

“We’ve changed the way we deliver files out-of-house and internally to other systems, and Qumulo’s easy integration into our workflow and systems is playing a part in that,” said Edwards. “Everyone from the marketing group, to our dot-com and interactive groups are relying on it. Whether the files are being sent to cable operators, the MSG on-air promotions department, or our teams’ websites, the deliverables are all passing through Qumulo.”

Going forward, MSG Networks expects to continue expanding the scope of the business units and functions that interact with the Qumulo cluster, including opening it up to mobile video field units for home and away games, and eventually processing and delivery for live-video. The MSG Networks team is also looking forward to digging into one of Qumulo’s defining features: its real-time analytics. Qumulo software delivers real-time data analytics that help businesses obtain instant visibility and insight about their data footprint, explaining usage patterns and showing workload’s impact on performance and capacity. Organizations like MSG Networks can tap these analytics through a convenient dashboard available in any browser, and use the REST API for easy report customization or even integration into other data systems.

As MSG Networks adapts and changes how it uses the new storage cluster, they plan to rely heavily on the Qumulo Care customer success team for support. “I really like the bi-weekly calls I get from Qumulo Care. That level of proactivity just isn’t something we see from any other vendors, and it really helps us stay connected and ensure there aren’t any issues with the storage.”