Sky Sport HQ excels with high-tech in all areas 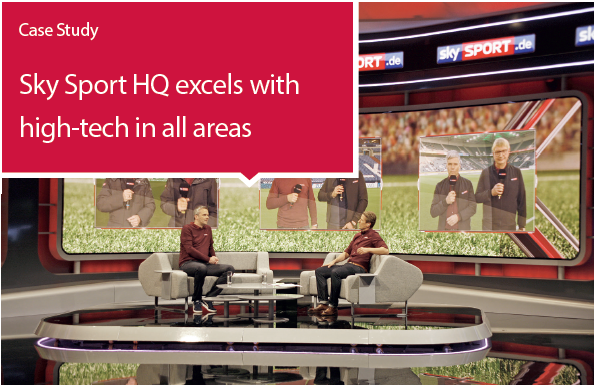 Sky Sport HQ covers a total area of 4,600 square meters, of which 1,700 square meters are used by four high-tech live studios. The broadcasting centre has 41 rooms. Here, around 50 kilometres of cable were laid to get the technology up and running. According to Sky, the company is able to produce and broadcast up to 12 programmes in parallel on one weekend. Sky Germany operates five sports channels that broadcast around the clock. According to the company, ten additional channels can be added to broadcast up to fourteen different sports events on one weekend. However, this tremendous output requires an enormous effort in technology, equipment and, of course, many employees.

At first glance, it is hard to imagine the capacities and technical work involved in this project. For the new building, the TV station invested a sum in the double-digit millions in the new broadcasting centre. Qvest Media, a global systems architect and technology consultant for broadcast and media technology, was responsible for the technological planning and subsequent system integration. One of the company’s areas of expertise is the implementation of innovative media techno- logy system landscapes. For their ambitious project Sky only considered the best technology currently available on the market. It was no coincidence that German manufacturers Guntermann & Drunck were chosen to provide the KVM technology.

Qvest Media GmbH is a world-leading sys- tems architect and ICT integrator in the fields of broadcasting and media technology, specializing in the television, media and telecommunications industries. The company provides comprehensive know-how for the planning, implementation and technical support of media technology infrastructures and relies on state-of-the-art products from world-class manufacturers in order to always be able to offer their customers the best possible solution.

To ensure that the entire equipment runs smoothly and around the clock, high availability, reliability and redundancy were essential for those responsible for the project. That‘s why they chose G&D KVM products for the broadcasting centre‘s IT infrastructure, since they serve as the backbone of the entire IT system and make it possible to remove computers into a central server room.

In order to optimally implement the high demands on security, redundancy, workflow facilitation and collaboration of the individual production teams for live reports, Qvest Media developed a concept to create a fully redundant structure of the production and operating computers which also included removing them from studios, control rooms and post-production. Two completely mirrored, redundant matrix switch clusters, each consisting of a ControlCenter-Digital 288, were installed in the central equipment room to provide redundant access to the various user and computer modules of the individual in the event of a fault – switching via one of the two matrices is not possible, the second matrix is used automatically. Thanks to full redundancy, the production teams can perform their tasks at all times.

Two completely mirrored, redundant matrix switch clusters were installed in the central equipment room to provide redundant access to the various user and computer modules of the individual in the event of a fault - Sky Sports Case Study Click To Tweet 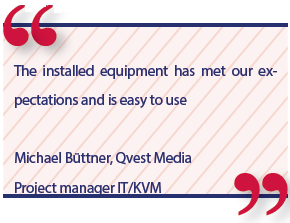 To integrate the two existing matrix switches – two DVICenter DP64 – as an extension of the system, G&D‘s matrix grid function was used. The function enables the bidirectional communication between systems and ensu- res optimal connections across the entire in- stallation. This allows users bidirectional and more flexible access to the computer technology and helps individual production teams work together across departments thus making them more flexible and improving the collaboration for live reporting.

The central equipment room houses around 100 high-performance computers, which play their part in ensuring that the Sky programme runs around the clock. All systems such as ingest servers, video servers, studio automation servers, servers and clients for graphics systems, teleprompters, servers for camera robotics, general configuration servers/clients and servers for broadcast automation are now separated from their users who are still able to access them using KVM technology. In order to make the equipment available at the various studio, control room and producer workstations, which are often distributed over several rooms, Qvest Media used CPU units and CAT cables to connect the computers to the central matrix switches. VGA, DVI and DP computer modules were used to harmonize the heterogeneous com- puter landscape. The integrator installed all modules as „UC variants“ to ensure a redundant connection to both ControlCenter-Digital matrices.

Priority was given to single-head CPU modules, but some dual-head units were applied especially for the machines in the ingest work area since the staff in this area require their workstations to have two displays. For keeping the racks as clearly arranged as possible, Sky Sport HQ counts on various G&D device carriers as well as MultiPower-6 and MultiPower-12 power supply units for power supply.

Workstations and their technical equipment

In order to facilitate the creative work in Sky‘s broadcasting  and  production  centre  and to make it as collaborative and efficient as possible, all video and programme control rooms as well as ingest, playout, the graphics department and several studios are now almost computer-free. Access to the remote equipment is carried out via KVM technology from G&D, whose receiver modules (CON units) for DisplayPort and DVI were installed at the workstations. To create multi-monitor workstations, the single-head CON units were bundled in pairs.

And although most of the equipment has been stored centrally, some departments still need to be able to access their computers locally while some producers needed to access several computers. The first issue has been solved with installing KVM switches, e.g. DP- MUX2, at each of these workstations.
Producers, in turn, are now able to use Trade- Switches to operate several computers with only one set of keyboard and mouse, without having to provide keyboard and mouse for each machine separately.
The result of the demanding IT installation and several months of technical preparations is really impressive: About 100 CPUs and 85 CONs and countless cables were connected to both mirrored matrix switches.

As the icing on the cake the KVM matrix ControlCenter-Digital has been integrated into LAWO‘s VSM broadcast control and monito- ring system to ensure uniform control  and to simplify multi-level, complex processes.

Thanks to G&D‘s IP-Control-API, the VSM con- troller communicates with the KVM matrix and can execute any switching commands such as simultaneous switching of different programme requirements or exchanging se- tups between several control rooms.

With their own production and broadcasting centre, Sky Germany gain maximum flexibility and above all even more freedom for future in-house productions. Individual work- flows have been improved, making everyday production easier for everyone involved. Re- moving the equipment into a central server room has significantly reduced the noise levels in studios and control rooms as well as the maintenance requirements for IT administrators. “The installed equipment has met our expectations and is easy to use“, summarizes Michael Büttner who is responsible for IT/ KVM at Qvest Media.

The future of Sky remains exciting. Europe‘s largest pay-tv provider continues to grow and is committed to the credo of offering its customers the best entertainment. Well, with the best technology available on the market, Sky is well equipped for the future and for further growth in Germany.

The future of Sky remains exciting. Europe‘s largest pay-tv provider continues to grow and is committed to the credo of offering its customers the best entertainment - Sky Sports Case Study Click To Tweet