Alex4D 360° Effects works exclusively with Apple’s Final Cut Pro 10.4 and later. This kit of simple to use effects range from effects that stylise whole spheres of video to those that help viewers notice specific features of the 360° environment. As well as working with spheres of video, they also work with overlays such as logos, pictures and titles.

The pack is divided into six categories: Repeat – to repeat footage and overlays around the sphere, Highlight – to attract attention to specific parts of the environment, Blur – blur parts of your footage and overlays, Stylize – to change the look of whole spheres at a time, Masks – to help overlay areas of 360° content inside other spheres and Flat – to make more of 360° footage used in flat non-spherical videos.

Final Cut Pro X is the best NLE for making 360° videos. Alex4D 360° Effects can be used to make videos destined for Facebook, YouTube and Twitter whose applications and websites can now display 360° videos automatically. 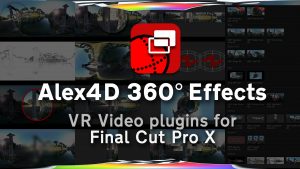