KitPlus: Coming out from behind the camera 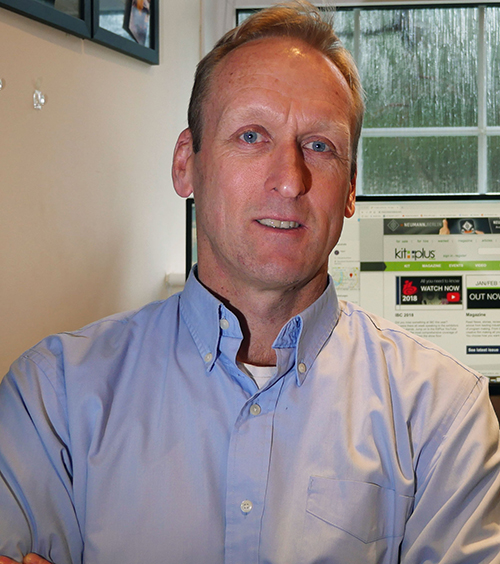 Let’s face it most of us are ‘behind the camera’ sort of people and if Covid hadn’t reared its ugly head then that’s most likely how it would have remained.

Rewind just over 12 months and the KitPlus Show in Shoreditch, London had just taken place with a packed show floor and copious amount of hand sanitizer on offer and if anyone had suggested our much-loved print magazine would be replaced in favour of a daily TV show, even temporarily, we’d have probably taken a sharp intake of breath!

As with many small companies when Covid hit we had to make quick decisions. Do we hide under a rock until it’s all over or create something that may actually help spread the news and messages that so many manufacturers, suppliers, experts and leaders in our industry were keen to tell? And so KitPlus TV was born.

For the last 10 years KitPlus has had a reputation at trade shows such as IBC or NAB as the company that turns up on your booth (invited of course) does a short video and dashes off to the next booth, all filmed, edited and shared online within 12 hours. We were fortunate to have already organically grown an online video subscriber audience and we did at least have some production and post production skills to tap into. But wanting to be a little different, we teamed up with our good friend and streaming guru Jon Pratchett and created a virtual studio within our vMix software suite into which we could be teleported from the comfort of our green screened homes / sheds and attempt to look like we are all in the same studio, from where we would interview guests and read the news.

So leaving our TV project there for a second let’s digress, as we often did in 2020, to dreaming about trade shows and with NAB, CABSAT and IBC on hold, our next digression was from the IABM with their own 2020 event now going virtual. During the summer and autumn of last year a few event organisers had tried virtual events with varying success; webinar video style chats were seemingly starting to wear everyone down and the IABM came up with the #nodigitalfatigue tag. 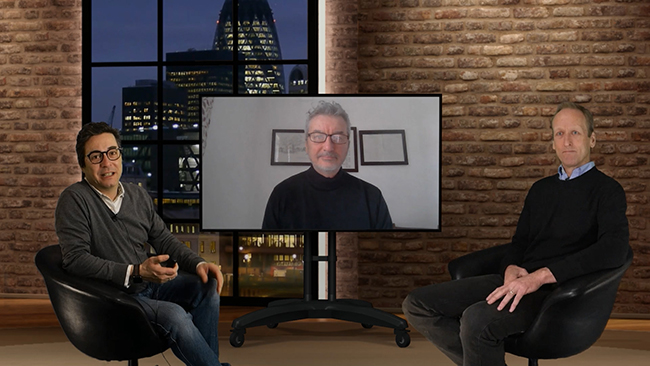 With Jon’s help we’d learnt a lot during 2020 about virtual sets and production, in fact we literally immersed ourselves in it for six months and our platform offered guests a chance to do something slightly different and although we were still all a long way apart we did feel close, which was nice for the conversation. But with Jon now back to doing his ‘proper’ job the question was how to apply our lockdown learning to work with the IABM to deliver the best virtual event of the year, something which we were delighted to be asked to help with.

The brief: Create a virtual set that needs to accommodate 8 hosts rotating around 21 shows with 35 guests over a three day event. Then add an awards ceremony with a glitzy virtual stage where all 48 nominees across 10 award categories would connect and be brought into a virtual set where the host will be introducing and speaking with the winners. And neither of these must look like Zoom and, here’s the thing, it must all be streamed live as it happens with everyone (everyone!) in their own home or office - that’s hosts, guests, nominees and tech. Remote production here we come!

The brief created a few initial challenges. Firstly anyone appearing in the virtual set must look like they are there. So with hosts at home we created six host presenter kits that we sent out (including green screen, broadcast mini camera, mic, lights etc) and during the ‘rehearsal’ phase we tested each host in situ to get the best look possible as well as connecting all 48 guests in advance to check audio and camera connections. As for KitPlus TV, we used vMix to control the whole event with hosts and guests connecting to a central production system where the virtual set and graphics were mixed and then streamed out to the IABM BaMLive!™ platform with recording locally and remotely for on-demand viewing. 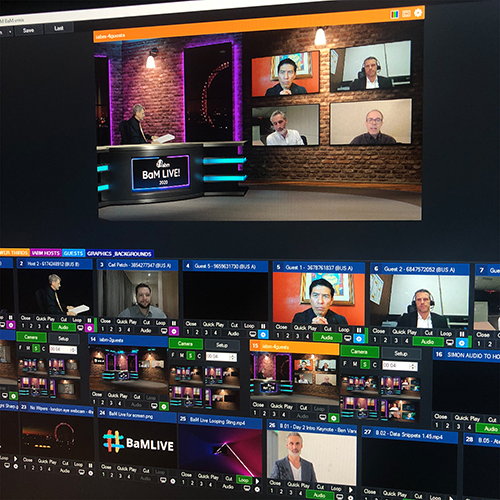 The preparation and planning was meticulous along with disaster recovery and failover; after all we are at home using domestic power and internet, so we needed to cater for the unexpected. To set the scene, one moment involved a green screened host in Brazil interviewing three guests, one in Houston, one in New York and one in India... all in their homes, connected to a virtual studio and streamed live from a house in an English Thames Valley village on top of a hill… and that was just one show out of 21 produced over the three days.

The applause the IABM received from the first BaMLive!™ in December was very well deserved on all fronts and we’re delighted that we’re once again working on the March virtual event, creating a new set to be streamed live to the IABM’s new platform.

And whilst this all goes on the KitPlus TV daily show, now in Season 3 with over 150 shows under our belts, continues with our news roundup show on Mondays followed by guests and kit reviews during the week. One of our missions for 2021 is to promote VPRs (video press releases) to insert into the news show. These are 30-60 second news items filmed by the manufacturer ‘No Frills’ and then embedded into the news creating a welcome break from Matt or Simon reading the news!

Editorial participation in KitPlus TV is free of charge thanks to support from those advertising around the frame and of course to Mediaproxy who spotted the show way back in April 2020 and wanted to assist in its development, so it’s important to acknowledge that without this help and support KitPlus TV might not be here today. So a big thank you to Mediaproxy and all those companies who believed the concept a refreshing change to traditional marketing and got behind it. Finally thanks as well to the voice on the end of a tech call, fortunately for him not so often now, JP.