Switch on the audience

A lot has happened over the last 12 months, particularly with how broadcasters have had to adapt to changing viewer habits, as content providers fight for viewer ratings, while the audience consumes content on up to three screens at a time. One mainstay on our TV in the UK is ITV’s Martin Lewis Money Show Live, the go-to money advice-show that’s helped the nation understand complex financial changes during the pandemic. Producers have harnessed the power of the audience on social media and created a format that puts viewers at the centre of the show, while they sit at home watching intently on their TVs and follow the conversation on their phones.

When the pandemic hit and the audience and production teams had to stay indoors, ITV decided to broadcast a special Covid-19 episode to talk about financial management during the pandemic. In a rapid change to scheduled programming, producers had just 48 hours to create a format that worked without a studio audience, who were usually the centrepiece to the show’s narrative. 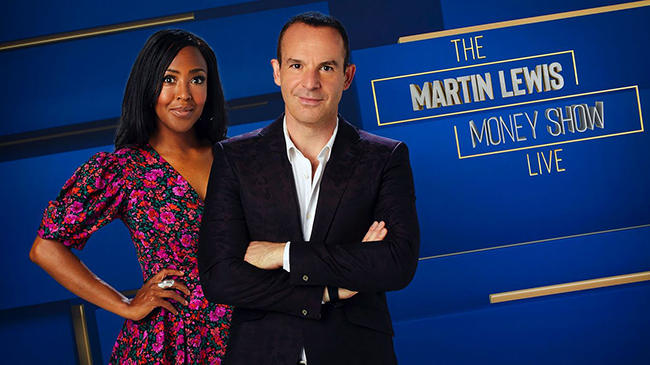 Part of ITV studios, production company MultiStory Media looked to bridge the gap between the viewers and host, Martin Lewis, to engage conversation and respond to viewers’ current financial issues. Following the previous success of using Never.no’s audience engagement platform, Bee-On for ITV’s Peston, the cloud-based content management platform was integrated into the virtual production workflow and setup to power the conversation of the one-off live programme. Jump forward to present day and the one-time Corona Virus special turned into multiple and a 20-episode series was commissioned in September 20

Using #MartinLewis to create the conversation on Twitter, viewers tweet questions and opinions in the hope to get covered over the 30-minute broadcast. Producers gather the best of the viewers’ tweets and line it up on the Bee-On timeline. Working with pre-made native broadcast graphics, the platform pushes the content, in real-time, to a large screen in the studio, where Martin Lewis and co-host Angellica Bell follow the conversation.

Anthony Chuck, the MultiStory Media production manager on the specials said “The team at Never.no were so supportive in the fast turnaround nature of our production. Offering remote training sessions for our production teams and support throughout the whole process. The system worked without a glitch and the software assisted us in being able to successfully execute a central part of the programme.” Based in London, Cardiff and Manchester, MultiStory Media have delivered multi-award-winning current affairs, entertainment and documentaries, including Come Dine with Me, Paul O’Grady: For the Love of Dogs, 63UP and Death Row: Countdown to Execution. 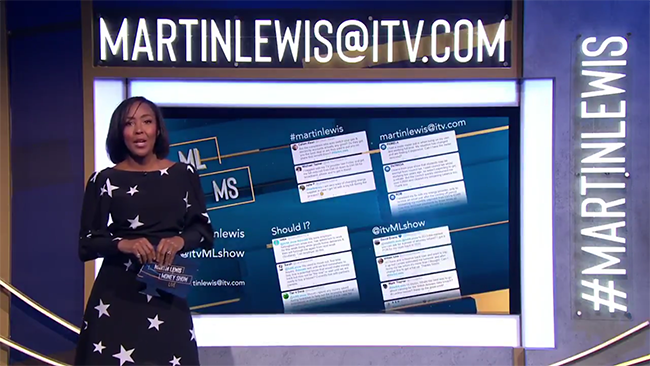 Managed through a web browser, Bee-On’s full access to the Twitter API enables the production manager to simply moderate all conversation directed at the show. Picking out the best content and most relevant questions, the team can moderate content to ensure rude or insulting content doesn’t slip through on air – an important requirement for a pre-watershed live show. In the latest series, producers were keen to gather the opinions of the audience through weekly polls across the show’s social platforms; Bee-On was set up to aggregate results and broadcast graphics were added to package the results on the large screen.

“The specials were very well received, so we were excited that a tenth series was commissioned. It’s been a really tough time for all of us; Martin Lewis has strived to help everyone understand complicated financial policies, so we wanted to make sure that viewers were at the centre of show, as it’s all about them. We reach over one million followers on twitter, so featuring weekly polls gauges a highly represented opinion of the country and enables us to produce creditable content. It’s so simple curating audience generated content and publishing into a live broadcast with Bee-On alongside our graphics engine by Kenziko,” said the show’s current production manager, Sarah Bishop Fenn.

It’s no mean feat to create a trending topic on Twitter, but the show does this weekly! Following the Corona Virus special, #MartinLewis began trending on Twitter and became the third highest most talked about topic in the UK during the show. With conversation heating up, #MartinLewis continued in the top-five rank for the next five hours as the host jumped on Twitter and continued answering questions. Big issues such as ‘work,’ ‘holiday’ and ‘mortgage holiday’ were significant in the conversation, which also included ‘NHSWorkers’, ‘credit’ and ‘refund’.

During a time of lock down, MultiStory Media with ITV, created and broadcast a show where the audience is key to the narrative. By utilising social media powered by Bee-On, the audience are able to engage even more than they would have in the studio.