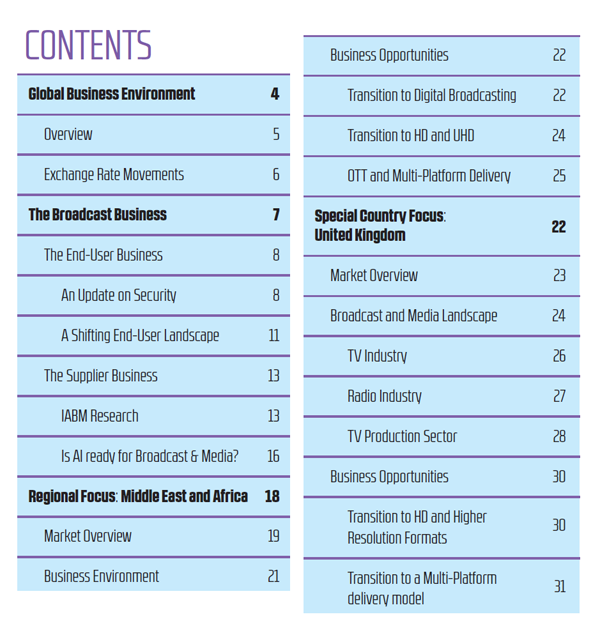 March 2017 - Regional Focus on UK & MEA Regions Q1 2017: Positive signs Recent data from the IMF show that economic activity may slightly pick up in 2017 on the back of resurgent commodity prices and expected fiscal stimulus in North America World economic output is expected to grow by 3.4% in 2017, up from 3.1% in 2016 The US Dollar has continued to be strong in the first quarter of 2017. The British Pound, the Euro and the Mexican Peso have continued to be the worst performers against the US Dollar This edition of the Digest will focus on the UK & MEA Regions [maxbutton id="46" ]

What is the resistance to calling any form of program delivery broadcasting? It appears to come down to the concept of ‘on-demand’. Broadcasting is considered as linear programming and on-demand is, by definition, non-linear programming.

The event is the largest state broadcast association convention in the nation, with 1,100+ annual registrants and 125 exhibitors.

Broadcast Australia has been honored with the IABM International Award for Excellence in Sustainability. The company was recognized for successfully introducing a renewable energy Solar PV solution at its Muswellbrook site in New South Wales. The new photo-voltaic system uses advanced German battery storage technology, coupled with 96 solar panels. This solution has allowed Broadcast Australia to take a remote site almost entirely off the national power grid whilst continuing to deliver quality broadcasting, radio, and critical emergency services for its customers, and over 50,000 end users within a 500km radius. “Broadcast Australia is proud to trial this renewable energy solution – and take Australia’s first transmission site off-grid,” said Peter Lambourne, CEO of Broadcast Australia. “The system has been designed with the ruggedness and reliability demanded by the Australian outback, where many sites are extremely remote and operate under harsh conditions.” The 72 batteries can store 215kWh of power, producing enough solar energy to run the Muswellbrook transmission system for up to 43 hours, and take just over 5.5 hours to charge at full efficiency. The company had made a commitment to reduce its carbon footprint by 10% by 2019 (against a 2014 baseline). It entered a partnership with...