How do you make two people thousands of kilometers apart appear side-by-side in a virtual studio instantaneously? Teleportation technology. While it may sound like science fiction, Vizrt regularly brings people together from separate locations across the globe with help from a pair of Matrox® Monarch EDGE 4K/multi-HD encoder and decoder devices when producing its own VizrTV online series. 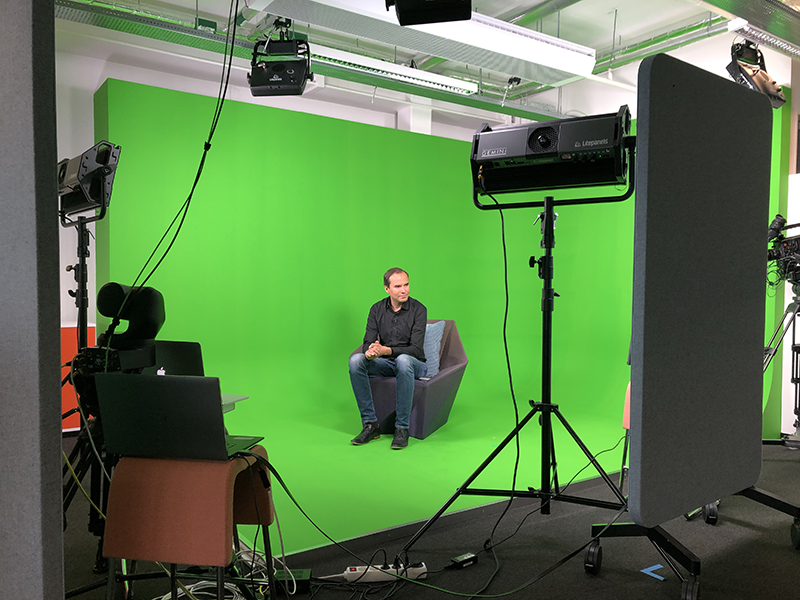 No travel? No problem.

Due to COVID-19 travel restrictions, what began as a means of internal communication to unite and inspire more than 700 Vizrt employees in 30 offices around the world quickly became VizrTV: an external platform focused on issues currently impacting the broadcast industry while demonstrating how Vizrt’s broadcasting tools can help solve them in real-time. While broadcasters around the world were unable to return to their broadcast studios and forced to report the news from their own homes, Vizrt’s in-house and guest experts found themselves in the exact same predicament.

To show the world how Vizrt’s software-defined tools can help broadcasters create a more realistic live reporting experience for their viewers, Lang did not want to simply talk about the tools. Instead, he wanted to demonstrate their capabilities during live interviews. “We wanted to create a talk show format that looks natural and resembles what viewers are accustomed to seeing on TV,” said Lang. “Zoom-style interviews may become the norm, but with our technology, we can do better. We wanted to inspire our customers by showing them what is possible. How do you bring two storytellers together in one place? This is the question we were trying to answer when we decided to use the Monarch EDGE encoder and decoder devices. The 4:2:2 10-bit video that the Monarch EDGE provides was critical to allow us to achieve the quality of keying we needed to make the production truly convincing.”

The Monarch EDGE encoder and decoder pair met all of Vizrt’s requirements for a high-performance solution that would allow them to create the image of multiple individuals having a seamless interview in one location despite their physical distance from one another. Vizrt’s ‘location’ for VizrTV is a virtual studio, exquisitely rendered by Vizrt’s Viz Engine 4.1 compositing, real-time 3D rendering, and video playout platform. An essential tool to realizing this illusion is the Monarch EDGE, which is able to deliver 4:2:2 10-bit H.264 streams that translate to flawless green screen compositions. Furthermore, SRT support on the Monarch EDGE encoder and decoder pair allows for ultra-low-latency video transport over public Internet – and ultimately – a smooth and realistic viewing experience for those watching the VizrTV live stream. 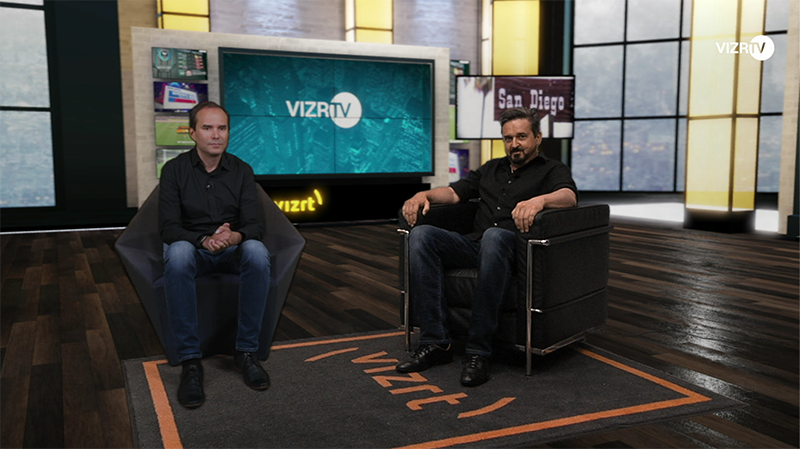 For VizrTV episodes featuring a one-on-one dialog between Black and Lang, cameras capturing each individual are stationed in separate studios in Bergen, Norway and Vomp, Austria, respectively. During these productions, the Monarch EDGE encoder was housed in the Norway studio, while the Monarch EDGE decoder was located in the Austria studio. SDI cameras send HD video along with embedded audio to the Monarch EDGE encoder – which encoded at 6 Mbps and streamed in SRT – with delivery latencies that allow for a natural flow of conversation. The Monarch EDGE decoder received the stream, then output an HD-SDI feed with audio to the Viz Engine 4.1 system housed in the Austria studio. A second SDI camera in studio sends SDI video with embedded audio to the same Viz Engine 4.1 system, which generates the final composition for delivery to a Viz Vectar switching system. This system provides cuts between clips and live and encoded program delivery to Vimeo, Facebook Live, and LinkedIn, as well as proxy feedback to Black for program monitoring on his laptop. Although the Monarch EDGE encoder and decoder pair does have an independent, bi-directional analog audio circuit available to users, Black and Lang opted to use Microsoft® Teams for their real-time audio communications during these broadcasts.

Productions involving three participants follow a similar setup with an encoder required at each remote location. A single Monarch EDGE decoder and take up to four streams. In an example of a three-participant VizrTV production, Dr. Andrew Cross, President of Global Research and Development for the Vizrt Group, appeared on screen while being filmed in San Antonio, United States, alongside Lang and Black. The Monarch EDGE encoder was used to capture and encode the feed captured by the camera in the U.S. studio and transport it to the Monarch EDGE decoder in Austria. There, the device was also used to decode feeds coming from the other Monarch EDGE encoder in Norway. The end result was three individuals appearing side-by-side-by-side in a realistic virtual studio environment rendered by the Viz Engine 4.1. Despite participants being located in three separate cities across the globe, VizrTV was able to deliver a realistic live interview.

The Monarch EDGE encoder and decoder pair’s ability to encode multiple 4:2:2 10-bit video feeds and transport them using SRT over public Internet with ultra-low latency has made it easy for Vizrt to create a realistic virtual studio setting for VizrTV, in which multiple individuals can come together from separate locations and in real time. “We wanted the end result to be a seamless viewing experience for the people watching,” said Lang. “We didn’t want the viewers to say, ‘Wow, this is great technology.’ Instead, we wanted seamless interaction with the video so viewers can focus on the story. We could not have accomplished that without the Monarch EDGE encoder and decoder.”

Lang noted that Vizrt plans to leverage the Monarch EDGE encoder and decoder for its upcoming VizrTV productions. “We are looking forward to being able to use the Monarch EDGE devices alongside our own solutions in future VizrTV episodes and more,” he said. “We are eager to see what else we can accomplish with this dynamic combination.”