Connect » Real-Time Signal Transfer » Intra-Facility Connectivity » IP networks and switches and SDVN » RelayCaster is a solution for moving realtime content over the open Internet. It enables you to avoid expensive proprietary or dedicated contribution links that drive up your costs. By using a proprietary IP-based algorithm that is entirely compatible with the internet, RelayCaster lets you create point-to-point, multi-point and network solutions for today’s media businesses. 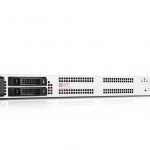 The LTN LEAF Flypack™ enables professional broadcasters to deliver live events easily, conveniently and globally. The LTN Flypack offers the power of a satellite truck at a fraction of the cost and in a compact carry-on-sized package while reliably maintaining broadcast quality, low latency and worldwide reach. A complete solution for a wide range of live events, LTN’s LEAF Flypack uses LTN Network, the company’s highly redundant, fully managed and controlled IP-based network designed specifically to provide a virtually instantaneous live experience. LTN LEAF Flypack is contained in a compact lightweight 35lbs 21.64 x 13.87" x 9"  pre-fabricated and easily transportable rolling case. It is available with multiple encode and decode options, and encodes/decodes at up to 20 mbps with both SD and HD support. LTN LEAF has a plug-and-play setup with encryption available if required.By connecting to LTN’s fully managed network, the broadcaster can manage and control video from origin to destination. It offers features that correct jitter and packet loss over a global private backbone network and ensures latency of less than 300ms end-to-end. The network enables point-to-point and point-to multipoint connections and features full network redundancy. Customers can access their own monitoring portal and have 24/7 customer support via the LTN NOC.

The perfect solution for transmitting or receiving low-latency live video via the LTN Network.
FIND OUT MORE

Connect » Real-Time Signal Transfer » Intra-Facility Connectivity » IP networks and switches and SDVN » Whether it’s for contribution or distribution, full-time or occasional use, the LTN LEAF with integrated encoder and decoder options is the perfect solution for transmitting or receiving low-latency live video via the LTN Network ecosystem. The LTN LEAF combines access to the LTN video transmission network as well as SD or HD encoding and/or decoding into a single compact 1-rack-unit device. The LTN LEAF requires minimal on-site setup. Once the appliance is connected at a user location, it automatically accesses LTN Global’s fully managed global IP network via a business-class Internet connection. The user’s site then is ready to transmit and receive live video, with LTN’s IP transmission service providing rock-solid reliability, broadcast quality and global reach.LTN LEAF is an integrated appliance that provides the flexibility of multiple encode and decode configurations and provides a cost-effective, fully managed solution for transmitting or receiving broadcast-quality video. The encoder/decoder configurations and transport service are managed by LTN to provide a simple and reliable solution. Just connect to the SDI video ports on the appliance, and you can transmit and receive broadcasts to and from any site on the LTN Network. The LTN LEAF provides a low-latency encode mode to support interactive interviews and live shots with lower end-to-end latency (SDI to SDI) than satellite. The LEAF also produces very high-quality encoding for fast-motion sports and complex tape playout content at bitrates up to 20 Mbps and also provides high-quality multi-codec decoding of up to four simultaneous feeds. 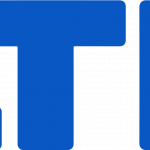 LTN Network is a broadcast-quality IP Video transport solution providing an innovative, IP-based live video delivery service that meets or exceeds broadcast- quality standards. It has been widely adopted by major broadcasters, media companies, content creators and owners and is connected to over 3000 sites globally.

LTN's unique and patented technology was designed to combine the reach and flexibility of the internet with the quality and reliability of a private network. The network enables live video delivery with consistent low delay and high quality - with 99.999% reliability - on a global scale. 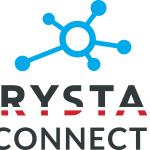 With its swiss-army-knife approach, the Nimbra 400 family is the very definition of versatility. Engineered for the harsh realities of the internet, the Nimbra 400 family supports a wide range of video and transport technologies. The combination of native support for both AVC and HEVC encoding/decoding, compressed video over IP and ASI and an open and flexible approach to IP networking in a super-efficient 1 RU form factor makes the Nimbra 400 family a perfect companion for space constrained remote sites and flight kits. With native support for RIST, SRT, Zixi and our own Edge Connect software means you can get your content anywhere. The integrated encryption and firewall paired with transport of any remote management traffic and comms also minimizes the need for third party equipment on site.

Paired with its standalone software counterpart, the Virtual Nimbra, means there are solutions ranging from highly redundant appliances for flight-kit and racks, to flexible software for datacenters and public cloud providers. 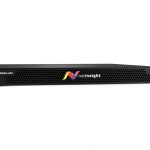 Combining native video, audio and high quality ethernet transport with switching, the Nimbra 300 provides a high-quality multiservice solution for demanding media applications. Multi-service capabilities allow you to transport live and file-based content across the same network, and with native support for DTT (ATSC 3.0, DVB-T2, ISDB-T) transport, Broadcast Radio distribution and video contribution the Nimbra 300 series gives you all the flexibility you need.

With support for service admission control and guaranteed bandwidth, performance and characteristics different services can safely be mixed no matter the network load. With hitless 1+1 protection of media and data services you can be sure that the expected service quality will always be delivered. 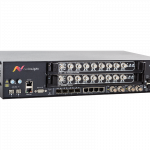 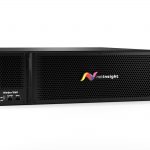 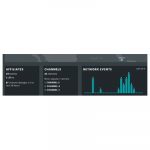 With its three network interfaces, IPConnect’s data gateway provides extra protection through packet encapsulation, which encloses external IP data packets in a GatesAir protocol wrapper as it moves across IP networks. IPConnect provides this protection for studio-generated data, as well as IP data from external sources. While the former might include RDS data or SNMP control signals to trigger a command at the transmitter site, the latter may incorporate program or control data coming from a network operations center, satellite feed or advertising service. 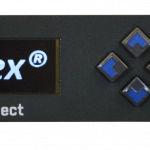 By incorporating three IP Interfaces that can be used for streaming and management, the IP Link systems can provide a level of reliability not seen in comparably-priced codecs.

As the latest additions to the Intraplex line of data transport products, the IP Link family of audio codecs bring legendary Intraplex reliability to the IP codec market.

Connect » Real-Time Signal Transfer » Intra-Facility Connectivity » IP networks and switches and SDVN » The next generation of digital STL
Our challenge: to design a studio-to-transmitter link (STL) for your most demanding 950 MHz applications — one as reliable and robust as Intraplex® T1 and IP audio links. Digital STL manages much more than audio, so installation and configuration need to be straightforward, not a science project. Data should not be optional, requiring additional boxes and complexity. Your STL should be ready, out of the box, for AM, FM and HD Radio™, as well as future multimedia applications.

Earlier digital STLs were not designed for IP data transport. Adding IP data to them required optional modules and external add-ons, and many engineers working on HD Radio installations reported spending much time and money trying to eliminate glitches.

Our solution: HD Link™ is designed to manage all HD Radio™ transport scenarios, regardless of where you place your importer and exporter. Its two prioritized Ethernet paths give preference to HD Radio™ data over control and other LAN/WAN data. It supports both UDP and TCP, and even handles the switching of TCP return packets over asymmetric IP paths with plug-and-play simplicity.

HD Link offers RF power to spare, an integrated IP gateway with sophisticated data handling capabilities, and multiple channels of audio. The intuitive front panel and remote interfaces tap into the most complete feature set of any microwave STL, yet take less time to configure. It can even operate on both RF and IP simultaneously, and allows automatic backup of all services from one to the other.

Intraplex is broadcasting’s first choice for rock-solid, full-time operation of T1 STLs. With HD Link, you can now count on the same dependable performance, superior support and long-term value for your microwave links. 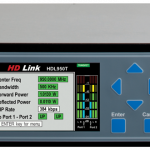 The DARK8ADI (Analogue & Digital Input) is a very powerful Dante®/ AES67 network audio interface, in a robust 1RU 19" subrack It has a 8 of low noise analogue line inputs and 4 of transformer balanced AES3 digital audio inputs. These inputs are transmitted on a fully redundant Dante/ AES67 network interface.

In total 16 audio circuits are sent to the Dante/ AES67 network. Eight of these circuits are always derived from the 4 x AES3 inputs, the other eight are automatically switched between the AES3 and analogue inputs. If the DARK8ADI detects valid AES3 signal on a channel then this will be routed to the network output.  If no valid AES3 is detected then the analogue input will be routed to the network output instead of the AES3.

The rugged design, redundant mains powering & redundant network facility of the unit means that it can easily be placed and left unattended wherever audio sources are required.

Analogue/ AES3 Auto SwitchingEight of the audio outputs are derived from both the 4 x AES3 inputs and the 8 analogue inputs, whereby the AES3 inputs take priority to the analogue circuits. Our input circuitry looks for valid AES3 data streams on the AES3 inputs.  If one is detected then the pair of audio outputs (AES3 is two audio channels) associated with that circuit will be routed to the Dante/ AES67 output and if no valid AES3 signal is detected then the analogue input will be routed to that output.

AES3 Network OutputsAs well as the switched outputs, the outputs of the 4 x AES3 input circuits are always routed to 8 audio channels of the AoIP network.

Sample Rate ConvertersThe AES3 audio inputs are fed through sample rate converters so that they match the AoIP networks sample frequency. The AoIP network supports up to 192kHz sampling and the AES3 inputs can be between 32 & 192kHz.

Network InterfaceThere are 4 network interfaces on the DARK8ADI. There are 2 x Neutrik Ethercon (RJ45) connectors and there are also 2 x SFP slots for customers to fit their own preferred fibre interfaces.

Redundant Network InterfaceWhen using the Dante protocol it is possible to set the DARK8ADI to have a fully redundant network interface whereby a completely glitch free automatic redundant audio network link is provided across 2 of the network interfaces.

Alarms & LEDsThe front panel features two LEDs (one indicating OK and the other fault) for both power supplies and both network ports. This data OK/ Fault information is also provided on solid state relay outputs on front panel D connectors. 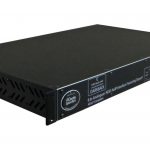 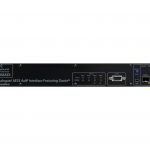 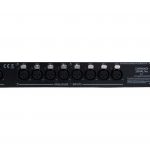