Chat with us, powered by LiveChat
Skip to content
Small cameras including miniature, lipstick, point-of-view and action cams.

With a 30x optical zoom and remote control capabilities, the white Sony SRG-300HW 1080p Desktop & Ceiling Mount Remote PTZ Camera, is suitable for medium to large venues such as lecture halls, auditoriums, houses of worship, and stadiums. The unit consists of a pan/tilt module and camera head and lens. The SRG-300HW captures HD video in 720p, 1080i, or 1080p at up to 59.94. It features a 1/2.8" Exmor CMOS sensor providing low-light sensitivity of 1.4 lux. The camera comes with Sony's Wide-D for wide dynamic range, enhancing the image with View-DR, while XDNR provides digital noise reduction in both moving and still images.

The SRG-300HW is suitable for use on a desk, mounted to a tripod, or you can mount it to a ceiling using the included brackets. The camera also features an Image Flip option, which simplifies setting up the camera when it is mounted upside down. It features remote control operation of pan, tilt, zoom, focus, iris, shutter speed, and gain.

Remote operation is a major component of the SRG-300HW's design, and the camera supports VISCA control protocols as well as RS-232 and RS-422. You can program the camera with up to 16 preset positions, which is useful for repetitive events and productions. The small size and remote operation capabilities of the SRG-300HW allow for placement where a manually operated camera and operator can not go.

The SRG-300HW provides up to 30x optical zoom, and 12x digital zoom

View-DR is Sony's Wide-D technology, specific to their security cameras to produce images with an extremely wide dynamic range. With View-DR, the camera uses an electronic shutter to capture multiple images, to reproduce each frame. One image is taken using a 'standard' exposure time and either one or three images are taken using very short exposure times depending on the camera type. As a result, View-DR nearly doubles the sensitivity compared to conventional Wide-D technologies. 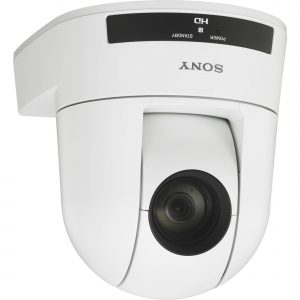 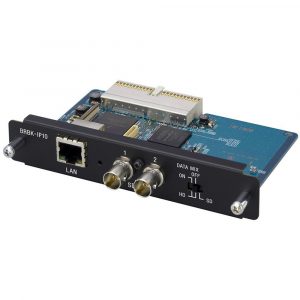 The BRBK-SF1 interface card is designed for use for use with the BRC-H900P Full-HD robotic camera and the BRC-Z330 HD robotic camera. The combined use of this card, CCFC-S200200m single-mode optical fibre cable segments and BRU-SF10 HD optical multiplex unit allows up to 2,000 metres (6,562 feet) transmission of camera images, external video syncsignals, 2 analogue audio channels and control signals via optical fibre cable. 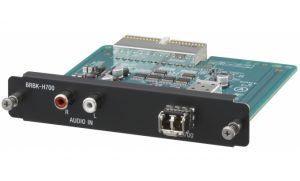 Designed for unattended operation, this compact but powerful robotic camera is an ideal complement to other broadcast cameras for capturing images in hard-to-reach or unobtrusive positions. It's equally at home in TV newsrooms, remote studios and on-air suites, auditoriums, houses of worship, courtrooms, classrooms or sports stadiums. It's also particularly suited to efficient multi-camera set-ups, under the control of a single operator.

Broadcast-friendly features include dual tally lamps for on-air operation, while operational flexibility is enhanced with options for ceiling, table top or tripod mounting. There’s also a broad range of video interfacing and remote control possibilities - plus support for PoE+ and genlock - for smooth integration into any broadcast, professional or corporate AV environment. 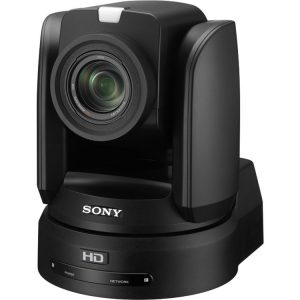 Designed for unattended operation, this compact but powerful robotic camera is an ideal complement to other broadcast cameras for capturing images in hard-to-reach or unobtrusive positions. It's equally at home in TV newsrooms, remote studios and on-air suites, auditoriums, houses of worship, courtrooms or outdoor sports events. Sony BRC-H900 Price is very good in UBMS Dubai Showroom. Come and experience the Sony BRC-H900 camera at UBMS showroom and get the best price. We can ship BRC-H900 to all GCC countries (Bahrain, Kuwait, Oman, Qatar, Saudi Arabia ) & African Countries . 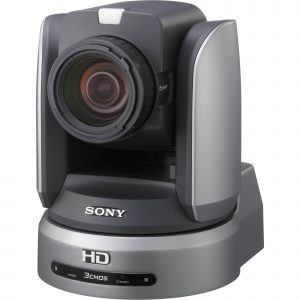 Designed for remote operation, this compact but powerful robotic camera is an ideal complement to other broadcast cameras for capturing images in hard-to-reach or unobtrusive positions. It's equally at home in TV newsrooms, remote studios, and on-air suites, auditoriums, faith centers, courtrooms, or sports stadiums. It's also particularly suited to efficient multi-camera setups, under the control of a single operator. 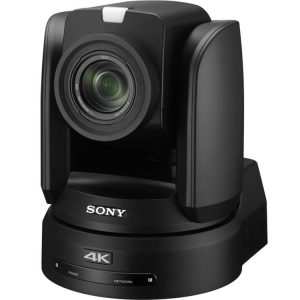 The versatile BRC-X400 PTZ camera is ideal for use in a wide range of environments - from broadcast studios and remote on-air suites to sports stadiums, arenas, houses of worship and lecture halls.

The camera's 1/2.5-type Exmor R™ sensor captures broadcast quality 4K images with excellent sensitivity, very low noise and rich, natural colour reproduction. It's complemented by the integrated high-resolution lens that offers a powerful zoom capability of up to 80x in Full HD** (30x in 4K), with an expansive approx. 70° wide angle coverage to capture every point of view.

Images also can be reviewing remotely via a web browser, with support for RTSP (Real Time Streaming Protocol) ensuring smooth, stable streaming of video plus audio (from an optional microphone, available separately) over an IP network.

Installation and set-up is easy, with a new Picture Setting File*** allowing the same settings to be applied to multiple cameras through a web interface from a laptop or PC. Convenient integration in multi-camera live events is also simplified with genlock support and an 'on-air' tally lamp. 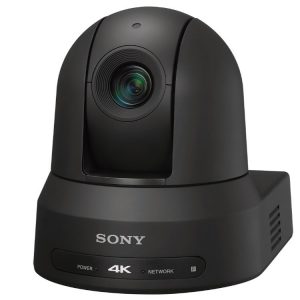 The RM-30BP is the successor to the RM-1000BP, the industry’s first comprehensive, multifunctional remote commander.

Ideal for freelancers and small-budget productions, the lightweight remote can be handheld, placed on a table or attached to a tripod arm for operation. The RM-30BP can control most camera functions including:

The RM-30BP can also be connected to the new MCX-500 for multi camera control directly from the switcher, and is compatible with the HXR-NX5R and PXW-FS7 v4.0, with plans to introduce compatibility for other Sony camcorders. 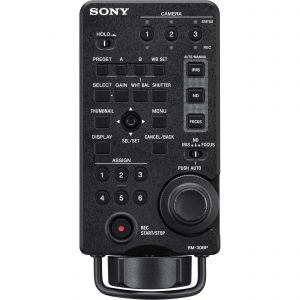 For use with the following Sony cameras: 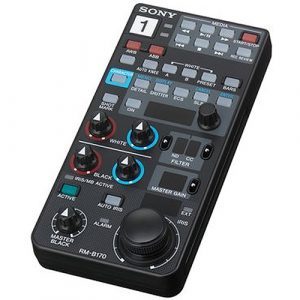 Control of up to 112 BRC cameras via an IP network 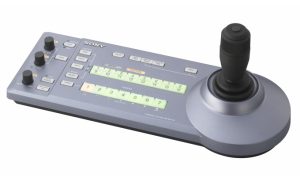 The RM-IP500 simplifies the building of cost-effective multi-camera content creation systems with a wide range of applications - from live events to conference halls, broadcast studios, education institutes and houses of worship. The RM-IP500 is an ideal partner for the Sony MCX-500 Multi-Camera Live Producer, creating a complete IP streaming and SD recording solution for a wide range of content production applications. Shop RM-IP500 in Dubai from UBMS .

PTZ speed can be adjusted from slow to fast for more polished, professional-looking results. Up to 100*¹ combinations of camera angles and settings can be stored as presets. Trace Memory*¹ allows a sequence of camera moves to be stored and recalled whenever required.

Up to 100 compatible Sony BRC or SRG Series PTZ remote cameras can be controlled over a standard IP network. Set-up's simple: the controller automatically assigns IP addresses to connected Sony PTZ cameras on the network, also assigning a camera number to each. Sony RM-IP500 provides control of Sony BRC-X1000/1, BRC-H800/1, BRC-H900 and SRG-360SHE PTZ cameras. UBMS is one of the best shoo to purchase RM-IP500 in Dubai.

The RM-IP500 is an ideal partner for the Sony MCX-500 Multi-Camera Live Producer, creating a complete IP streaming and SD recording solution for a wide range of content production applications.

The RM-IP500/1 automatically manages addressing each camera you connect, as well as assigning a camera number. This speeds up configuring and controlling the cameras on your network.

The controller supports up to 100 cameras of the BRC or SRG series, enabling control of pan, tilt, zoom, and other functions, over an IP network.

Depending on the specification and firmware version, the IP500/1 can store up to 100 presets of camera angles and settings.

the built-in numeric keypad speeds up switching control between cameras. 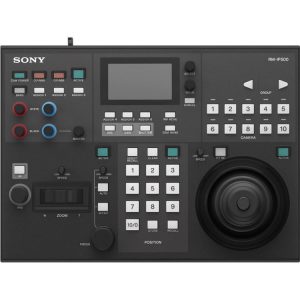 TICO-RAW unleashes image sensor and traditional RAW data-flows thanks to an innovative processing.
FIND OUT MORE

​TICO-RAW delivers the most beautiful pixels and most perfect colors, with the most brillant brights and the deepest darks ...with the world\'s best efficiency. Designed by intoPIX, it unleashes image sensor and traditional RAW data-flows thanks to an innovative processing and coding. The full power of the image sensor is preserved while reducing the bandwidth and storage needs. It offers high image quality and the capability to manage high resolution, high frame rate and high dynamic range workflows. TICO-RAW is the world’s first RAW codec that can offer compression efficiency with such low complexity on Bayer or Bayer-like Color Filter Arrays (CFA) patterns.