Democratizing Livestreaming Around the World 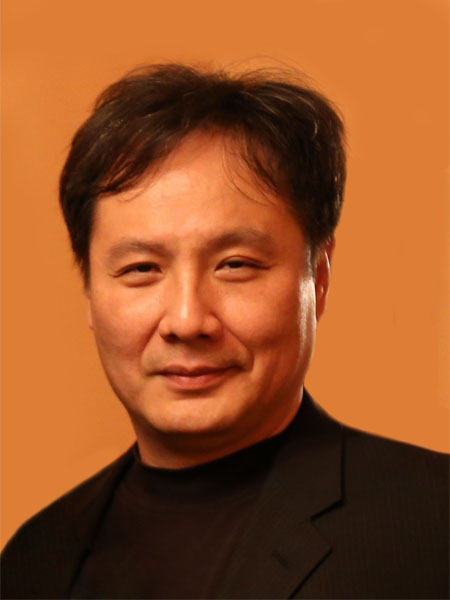 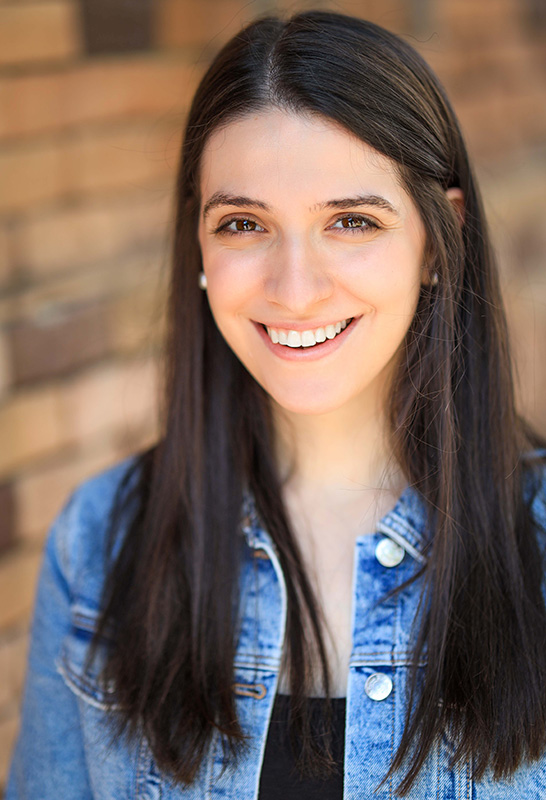 A case study within the performing arts industry

“I can’t enter the theater?”

In 2020, I traveled to Taiwan, to conduct the livestreaming of an opera production. But with a sudden surge of COVID cases abroad, foreigners were quickly barred from entering certain buildings in the country, including the very theater the opera was to be performed in. As I could no longer organize the livestreaming in person, I resorted to configuring the components for it in a hotel room, and passed them along to the opera production team’s camera crew. This allowed the crew to simply connect a few cables, and start the livestreaming with the push of a button. In this moment, the “SIMPLE LaaS” (Livestream-as-a-Service) was developed - enabling performers to livestream high quality content with four simple steps: 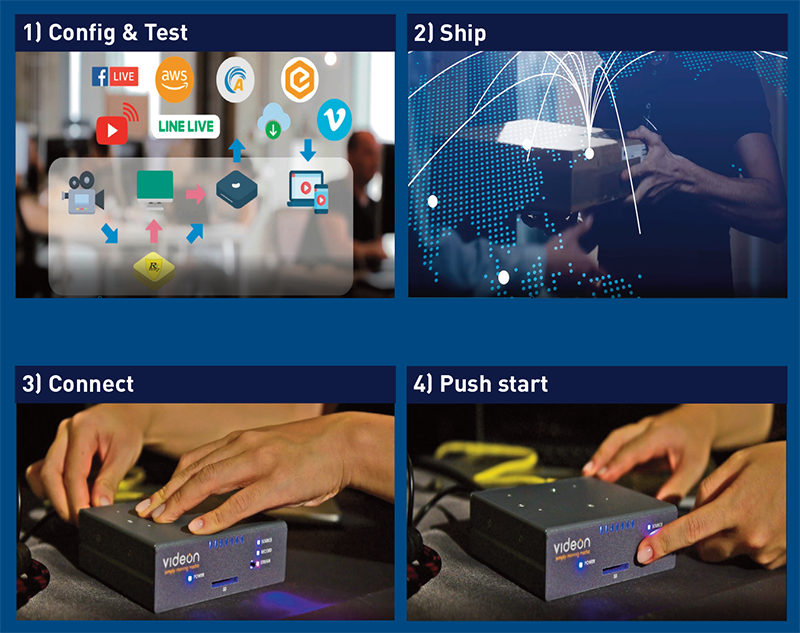 Little did I know at the time, SIMPLE LaaS would assist in understanding the various concerns livestreaming can introduce for a performer. In this article, I will walk through each of these concerns, and discuss how livestreaming can serve performing artists to the best of its abilities.

Sammi Cannold, director at New York City Center, has directed a documentary about the survival of theater during the pandemic. She recently shared with me her thoughts on the potential of livestreaming technology:

“In the world of commercial musical theater, where I operate as a freelance director, conversations around livestreaming are incredibly active and lively at this moment. For years, proponents have been trying to win over the commercial theater community, but never have they seen more traction than in the wake of the global pandemic. Having lived through a near existential threat to our industry, many theatermakers are eager to ensure that our artform reaches as many people as possible and streaming has proven to be a primary--if not the main--vehicle for that.”

But its potential does not come without concerns:

“One of the issues we're contending with is in the distinction between streaming and capture/release. Several major productions--such as the Broadway productions of Diana and Come From Away--have recently pursued capture and release approaches (with Netflix and Apple respectively). Where there is more reticence is in actual live-streaming as artists--myself included--are nervous about the lack of control that one has when relaying the content of a live event live. Of course, we as theatermakers, give up that control in the theater as our artform is necessarily live, but we seem to have trouble getting over the hurdle when it comes to capturing and immediately releasing, perhaps in part because we aren't familiar with the methods of quality control in the world of streaming. So, it feels as if there's an artist education campaign to be waged in that regard.”

As a livestream professional who has worked in the broadcast and consumer electronics industries for more than thirty years, I echo Sammi’s points, especially regarding the concern on “quality control.”

When producing a performance that is simultaneously in person and online, it is essential to have a tight collaboration between the stage and video directors. Luckily, the broadcasting industry has produced experienced video directors who can work well with stage directors, and assist in producing a still effective performance for the remote audience. But with the introduction of livestreaming, new and unique challenges come into play for video directors, who are used to only worrying about TV viewers.

A livestream must cater to the possibility of different viewing devices, and artistry must still be well presented to an audience regardless of how they are watching. For example, even if a stage’s lighting looks good in person, it is challenging to capture it in the same way on camera for streaming. The only way to know if a livestream is doing justice to the artistry of a performance’s lighting, effects, etc., is through “practice, practice, practice.” But to practice means to rehearse and recreate multiple times, and it hasn’t been particularly easy to set up livestreams for concerts before, much less to recreate them for “practicing.” Fortunately, the easy setup of “SIMPLE LaaS'” I devised in Taiwan allows performers to effortlessly practice livestreaming. In Taiwan, opera rehearsals were “practice livestreamed'' as many times as the performers wished until everyone felt comfortable with the display and quality of artistry in this livestreamed video. 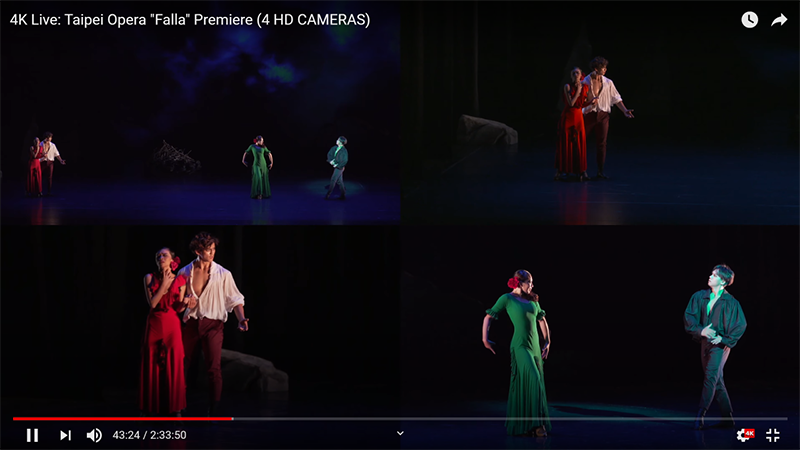 Aside from the concerns of portraying the artistry of a performance on video, we must be conscious of how engaging the livestream is as well. Boredom easily drives away online viewers. Considering how a portion of a remote audience may well be tuning into a performance on the small screens of their smartphones, a single, fixed angle livestream is practically inviting them to leave. But what makes them stay? A multiple-angle or XR? While I can’t say for sure, the camera angles used should regardlessly capture the soul of a performer, and deliver passion to online audiences. This 4HDs-in-one-4K livestream provides a possible solution to keeping online audiences engaged with a performance.

Multiple-angle cameras bring out more expressions, but also add more work and cost to a production. “Simple LaaS” pre-configures encoders to their respective cameras, allowing stage and video directors to focus on setting up different camera angles and other more important tasks. Once an optimal multi-view presentation is achieved, a few camera angles may be selected as a “premium channel”; these angles may be accessed by online audiences who chose to pay an extra fee.

“Quality control” is important. However, a different issue arises, as audiences are accustomed to watching online content for free. Extra steps are necessary to encourage them to pay for a livestreamed show. And as long as there exists a third party that controls and stands between performers and online audiences, it is unrealistic to expect the audiences to pay the performers. There are two underlying problems, and solutions to both point in the direction of democratizing livestreaming.

The first problem is when an audience assumes that watching intrusive advertisements and commercials pays for artists and the production of a show. However, it is possible to optimize this situation by providing performers with a financially viable method to control what commercials are shown, and when to show them. See diagram below, SIMPLE CM ADD, as an example as to how this may be achieved. 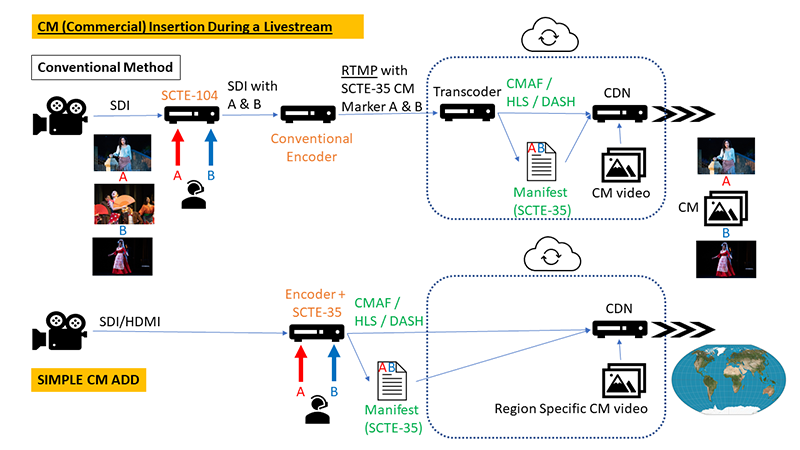 Covering the operation cost by increasing sponsorship revenues, by placing targeted commercials pertaining to different audiences of their respective regions.

The second problem that may arise is the idea that a pre-recorded production is finished, and that the people involved have been paid for it all already. This can be deflected by offering a “once-in-a-lifetime experience” to an audience. We are experimenting with an approach of disabling DVR, and livestreaming every show instead. If an audience member misses a show, they can buy or exchange for a ticket to watch the next livestream show. Each livestream should be ”live,” and the excitement it creates encourages audiences to pay to watch, rather than feeling as if they are paying to watch DVR content. Disabling DVR also helps lower the livestream operation cost by eliminating the cost of storing content in the cloud.

Every country’s livestream skill varies, and it is impractical to travel to all countries to support their livestream operations. SIMPLE LaaS allows us to support remotely, by requiring an encoder that:

To fulfil these requirements, we came to rely on Videon’s “EdgeCaster.” It is powered by a Qualcomm SoC that was originally designed for portable devices, consumes little power (< 7w), and operates without a fan. It is small (38.1mm×127mm×107.5mm) and light (450g), delivers multiple HTTP and RTMP streams simultaneously, and supports 4K. 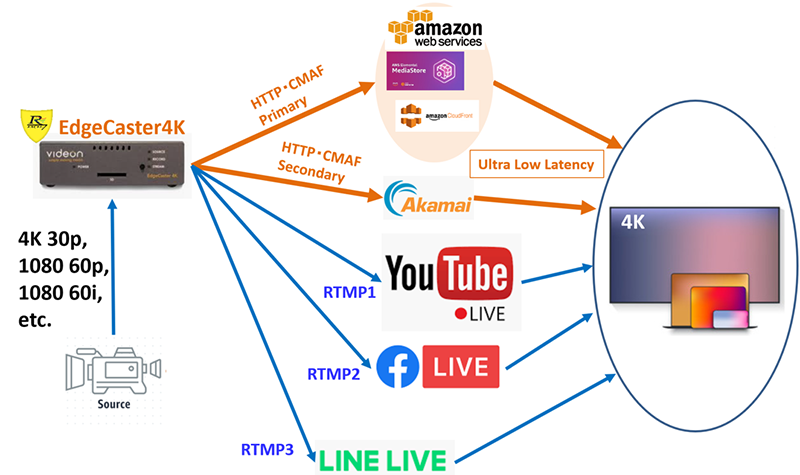 In this article, we share our mission of enabling performers to livestream shows at low cost and high quality, offering innovative technologies and tools to generate new revenue streams, and maintaining a profitable and sustainable livestream operation under the performers’ own control… all through democratizing livestreams by connecting performers directly to the audiences.