The Big Pivot: From Fans in Stands to Communities in Concert

Energy, rivalry and victory—the trifecta of elements for an exciting match, no matter the sport. Over the recent years, these aspects have been key components in the sports venue playbook of innovation as they were faced with having to transform the way they did business. Their goal? To create an immersive, energetic and memorable experience that would not only entice fans to attend events in person but also leave them looking forward to coming back again.

Their rival? The home theater. With so many advances in broadcast and audio-visual technology ranging from enormous television screens that display HD / UHD content to the transition to IP-based infrastructures that make consuming that content even better, to the introduction of social media and over-the-top (OTT) livestreaming apps, more fans are choosing to stay home—enjoying the game from the comfort of their own couch.

Now it’s a question of how to achieve the victory. Just as any business looking to expand their reach and grow their operations, sports venues from near and far became laser focused on enhancing their product—or in this case, an experience—and diversifying their offerings. 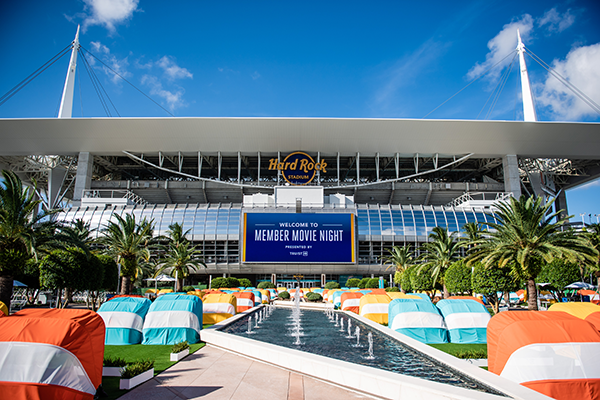 Take for instance, Chase Center in San Francisco. This world-class entertainment venue is home to the NBA’s Golden State Warriors and boasts more than 64 LED video displays including the star of the arena—a massive center-hung scoreboard with almost 10,000 square feet of surface LED space—the largest center-hung display in the league. While home televisions have certainly increased in size, they’re still no competition for the billions of pixels that immerse and excite attending Warrior fans. The entire video display package places a strong emphasis on giving fans all the information they could want from who is in the game to video replays and common stats—information that is fed from an all-IP video production control room engineered and integrated by Diversified. Finished just before the 2020 season, this upgrade was sure to bring broadcast-worthy event production in-house to the 18,000 fans in the venue, achieving the Warriors’ goal of exciting and engaging crowds with experiences they just could not get at home.

However, enter 2020 and the global pandemic—an opponent nobody wanted or expected—and the playing field quickly and dramatically changed. Even if fans wanted to attend, stay-at-home orders made that next to impossible. According to a recent interview with co-owner Joe Lacob, “The Golden State Warriors are losing 70% of their expected revenue without live fans.”[1]  What’s more, NBA commissioner Adam Silver has stated that about 40% of the league’s revenue comes from having fans at games2, and this is just one of the many sports leagues around the world to consider. With numerous, substantial venue investments slated to come online in 2020, the way in which owners and management would pivot to keep delivering those fan experiences would prove to make all the difference.

Knowing that a single sports season only lasts a few months, many venues were already seeking new ways to attract fans year-round even before the pandemic hit. Some venues go with concerts, others build in transformational pitches to accommodate two completely different sports. At Hard Rock Stadium, the venue’s primary mission is to provide a gathering place for the NFL’s Miami Dolphins to play and fans to cheer them on. Still, even in a “normal” world, the football season only lasts for about six months, leaving the stadium unused for the remainder of the year. For this reason, Hard Rock Stadium began to seek new events that would attract additional audiences, starting with the Miami Open tennis tournament that debuted there in 2019. Just months after the Dolphins wrapped up their regular season, the same space and campus around it was replaced with a tennis facility to rival just about any tennis venue seen on a major tour.[2] These kinds of transformations don’t just happen, though. They require thoughtful design when building or renovating, which Hard Rock Stadium underwent in 2016 to prepare for such occasions as well as being the host of Super Bowl LIV.

Of course, a big part of what should be considered in those designs is the technology—how will the audio be impacted? Can the control room seamlessly transition to support completely different content? According to Diversified’s director of AV and sound, Justo Gutierrez, “The first part of designing a sound system for a multi-purpose outdoor space is to understand the space itself so we know where loudspeaker coverage is needed.” Fast forward a little less than a year after the Miami Open and roughly a month after their big Super Bowl debut, and the stadium found itself in a much different situation but with the same goal in mind—keep a sense of community at the venue while creating memorable experiences in a safe environment.

As the first public facility to earn the Global Biorisk Advisory Council’s STAR accreditation, the standard used for facilities to implement cleaning, disinfecting and infectious disease prevention work practices, the Dolphins have been nothing but innovative in finding ways to stay open during the pandemic. Hence, their announcement in May 2020 unveiling both an outdoor drive-up theater inside the stadium and an open-air theater on their fountain plaza that would be used to show classic movies, marquee games in team history, commencement ceremonies, concerts and more.[3] “The inspiration for the outdoor theater really came from our Vice Chairman and CEO, Tom Garfinkel,” says Kim Rometo, Vice President and CIO of the Dolphins. “As the pandemic set in, he wanted to create a space that was socially distanced and yet still had a communal feel and so the outdoor theaters of Hard Rock Stadium were born.”

The venue started working with Diversified to utilize what they had already implemented years prior to provide maximum flexibility for the space including propagating audio all the way to the back and still filling the space with sound, as appropriate. The result is a space that can accommodate anything from live speakers or a band to a movie night, all contributing to an impactful experience and sense of community that otherwise could have been lost.

So, what’s the key to this victory? Similar to the teams on the fields, it’s agility and flexibility—words that have come to mean so much in our new normal. As more venues navigate the reality of downturned attendance and audiences awaiting herd immunity from the vaccine[4], they will need to be agile and flexible. Agile in how they reach their fans. Flexible in how they approach venue designs. Just as how we used to do so many things in our “pre-pandemic world,” the blueprint for what a sports stadium used to be has been tossed in the shredder, making way for the future of fan engagement—expanding how, when and where you engage with them from just on game day to potentially every time they’re looking to be entertained.