The GS-CU001B MkII is a highly versatile commentary unit. It was designed after close consultation with end users and the result is a stand alone unit which offers a wide range of facilities, and it is equally at home on the terraces, as it is in a studio.

InputsThree front panel inputs are mic/line switchable with selectable 48v phantom power. The front panel also has a small gain adjustment pot. Mic on/off switches can be selected in on/off mode or in cough mode. There is a global low frequency cut that can be selected on or off, and a preset compressor/limiter per input.

Outputs/TalkbackEach input has a direct discrete output on the rear panel along with a mixed output of all of the inputs, all on XLR. The mixed output is also available on an un-balanced 3.5mm jack socket as a local record. The direct output levels can be set in 3 positions:

1: 0dB + limiter: This is the normal operation and it limits peak levels.

2: 0dB: This feeds the output with an un-compressed nominal level of 0dB, for when the peak signal level will be controlled by outboard equipment.

3: -20dB: This feeds the output with a nominal level of -20dB providing extra headroom.

There are 3 common talkback circuits with individual buttons on the two main commentators’ sections (Position B's input cannot be switched to a talkback output). The operation of the talkback buttons features Config+ for configuring in different modes.

MonitoringThere are two main commentator monitoring sections, each with two separate 6.35mm A or B gauge jack sockets for headphones. In this way, the centre position B commentator can choose to share the monitoring of commentator A or C. There are 5 common external sources available for monitoring, plus an additional control which is the sum of the other 2 commentators/inputs. Each of the 6 pots has variable level control and left/both/right switching allowing commentator A and C to achieve their desired mix and balance levels. The sidetone control is located on the rear panel for commentator A and C to adjust the level of their own voice. There is a 7 segment LED PPM meter.

ModificationsThe GS-CU001 is a complete and versatile base system, and Glensound's most popular commentary unit. It is therefore a perfect starting point for custom requirements. This has resulted in many custom modified units, some listed above, and some not. We are always happy to investigate a particular requirement that you may have. To give you an idea of what is possible, these are some of the modifications, we have designed previously for others:

Other Versions are available: 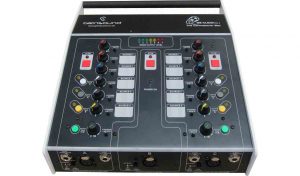