Ovation 7.1 builds on the considerable reputation it has for being an excellent solution to live-to-air playout in studios or outside broadcast situations. The ability to accept a wide selection of cue-triggering commands, mix live and pre-recorded audio events and an on-board mixer provides tremendous flexibility. The award-winning Pyramix Virtual Studio recording and editing software is the sound design tool that is included in the package. This allows rapid adjustment of cue positioning, levels and buss assignment from the same UI. Almost any audio file can be accepted without any need for pre-formatting so last minute additions to playlists are particularly easy.
Live events or live broadcasts are multimedia and require a new set of tools to successfully deliver the right result. This is often in surround or immersive audio and can be a mixture of prerecorded and live action. Ovation is the answer in providing the complexity needed for the production with the simplicity needed for the live broadcast. No other system offers the flexibility of cue management, cue triggering, output configuration and compatibility with other show control or broadcast devices. Onboard mixing with automation, Pyramix in the background for cue editing and level control, as-played logs, 3D panning; the list of features goes on. The ability to add live announcements to a prerecorded show is a must for any venue.
The latest version supports VST3 plugins, adds full console automation, UDP/IP support, remote controller enhancements and a host of seemingly small but significant improvements. The choice of controller and UI and the many options for outputting commands make Ovation ideal as a show controller or equally happy working with popular video servers or show controllers. Ovation provides the ability to move far beyond the standard workstation limit of playing one sound per output. Able to sum as many layers of sound as needed to any output in the system, users can play back as many multi-track events as needed without any need for them to be linked or chased in any way. Able to sum playback information into surround and stereo buses at the same time while also providing an almost limitless amount of mix-minus buses to manage live broadcast inputs makes the Ovation the perfect audio hub for broadcast productions. 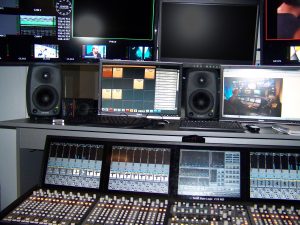