The Tempest Control Rack (TCR) offers an ideal solution for broadcast environments where a powerful broadcast audio mixer is required but a traditional console is not. The Tempest Control Rack consists of a 3 RU PC enclosure with an optional retractable 15.6” touchscreen. TCR runs the complete System T control software so acts as a stand-alone control interface for a System T installation. The custom screen mounting system enables the screen to be used at a wide range of angles, allowing the unit to be mounted in a traditional 19” rack or in angled studio furniture.TCR features dual PSU, Primary and Secondary OCP Network Connections, Primary and Secondary Dante Networks connections, Studio Integration Network connections (for Production Automation systems) and SSL Network connectivity for other System T control interfaces or T-SOLSA control from any PC on the network. There are HDMI and DVI-D video outputs, plus front and rear panel USB connections for Keyboard, Mouse and USB storage devices. When combined with a T25 (or T80) Engine, the Tempest Control Rack creates a standalone System T mixer in a rack. This combination is ideal for Production Automation controlled studios or can be combined with SSL Stageboxes to create a ‘Flypack’ for remote production. 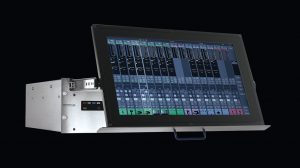