The UA46x9.5 covers a focal length from 9.5mm to a high magnification of 437mm, making it the world's widest angle** lens in its class. It is a portable broadcast zoom lens that enables incredible video to be shot in a wide variety of scenes. Using state-of-the-art optical design technology, it suppresses color aberrations to the minimum. Also, it realizes vivid color reproduction and high contrast by improving the light transmittance. Rich tones are reproduced with High Dynamic Range (HDR). 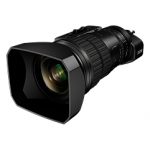