Create playlists with a group of files for repeated playback, highlight clips edited in Cambria Live, or a playlist to be muxed with a separate audio track.

Users can integrate PowerPoint presentations into a live broadcast for E-learning and seminars.

Simultaneously stream and record a broadcast as a TS or MP4 file.

Cambria Live can replicate the feel of a multi camera broadcast by creating virtual cameras in software that can be cued as if you had multiple studio cameras. 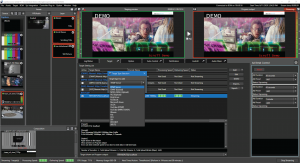