The Cinema EOS C500 Mark II is the perfect expression of form and function, exceptionally adaptable to virtually any production with its modular design. Three expansion units and user changeable lens mounts enable operators to build their ideal cinema system.

The Full Frame sensor is capable of capturing footage in a wide variety of aspect formats, including DCI-4K, UHD and Anamorphic Widescreen. The Cinema EOS C500 sensor supports both anamorphic and spherical lenses. In addition to full-frame, the sensor can also be paired with conventional Super 35mm and Super 16mm lenses using appropriate sensor crop modes, lens mount and adapter. To know more about EOS C500 Mark II contact UBMS.

The EOS C500 Mark II uses a high-quality debayering algorithm when over sampling 5.9K for 4K/UHD recording. This suppresses moiré and reduces noise, resulting in a superior quality image.


User interchangeable lens mounts and an available B4 mount adapter gives operators the freedom to make bold creative choices based on the subject matter.

The EOS C500 Mark II ships with an EF Mount that can be user swapped to an optional Locking EF (EF-C) or PL mount. Each mount swaps easily by simply removing four M3 hex screws. A shim set is provided with each mount kit in order to adjust back focus for the precision in focusing accuracy that professionals rely


Thanks to the powerful DIGIC DV 7 image processing platform, the EOS C500 Mark II can record Cinema RAW Light directly to onboard CFexpress cards, which keeps the data-rich signal captured by the 5.9K full-frame sensor intact. Cinema RAW Light offers plenty of freedom for grading in file sizes that are about 1/3 to 1/5 the size of Cinema RAW, offering a great combination in terms of codec efficiency and quality.

When recording in 5.9K Cinema RAW Light, 60 fps is available, which is an ideal range of high-quality slow-motion capture for typical human movements. In 2K (Crop) mode, frame rates up to 120fps are available allowing users to slow down the action even further, for more dramatic scenes and special effects. Two new buttons S&F(Slow and Fast Motion) and S&F FPS (Slow and Fast Motion – Frames per Second) have been added to gives quick access to desired speed settings, making it simple to utilize this creative tool quickly and spontaneously when the moment is right.


Higher resolution, greater bit depths and faster frame rates provide versatility and greater image quality but come at the cost of much larger file sizes. Proxy files can greatly speed up the editorial process by providing a lower bandwidth alternative for the initial file sharing and edits.

Compatibility with EF and PL Lenses*


With optional mount kits, users can swap from EF to Locking EF-C or PL mounts on their own. PL lenses are a cinema legacy. With a wide breath of options available to cinematographers choosing a lens is an important part of the creative process. The EOS C500 Mark II’s interchangeability now makes it possible to take any PL lens and pair it with Canon’s state-of-the-art sensor to meet the needs of any project.

Using Canon’s EF still lenses offer remarkable new possibilities for cinematographers including the use of specialty lenses like the fisheye zoom, tilt-shift and super-telephotos.

The amount of viable lens options can be further increased through an optional B4 lens mount adapter. This adapter is available for the PL or EF mount allowing 2/3” lensing options to be used with the camera.


The EOS C500 Mark II offers cinematographers anamorphic lens support. Users can now achieve wide cinematic looks and oval bokeh particular to anamorphic glass. It is a distinctly cinematic palette that is within reach for your next project.


The EOS C500 Mark II is the first Canon Cinema EOS camera to feature built-in five-axis electronic IS that works with almost any lens including anamorphic.


A new modular design allows productions to optimize and customize the EOS C500 Mark II to specific shooting needs. Accessories and expansion units can be easily attached to provide different levels of functionality. The camera is equally at home fully rigged with a large zoom lens, FIZ unit, audio accessories and rangefinder as it is stripped down flying on a drone.


Users can upload and apply custom LUTs to the EOS C500 Mark II. LUTs can be assigned to specific output terminals and the LCD or viewfinder. Clients can be viewing one LUT, while production works from another, giving different production roles the ability to customize the look of the image to their needs.


With Expansion Unit EU-V2, the EOS C500 Mark II supports up to 4-channel audio recording. Audio input from the camera’s internal microphone, mini mic port, and XLR ports can be assigned to the 4 different audio channels. This flexibility allows a wide range of audio devices to be connected and mixed directly on the camera. 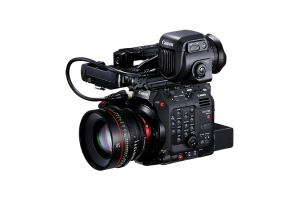