Trust in this multi-purpose workhorse for everything from corporate video to education, live events to weddings. Stunning pictures made easy Designed to get the job done quickly and efficiently, the NX5R’s advanced three 1/2.8-type Full HD Exmor CMOS system can be relied upon to deliver sharp, cleanly focused imagery in almost any shooting scenario. Recorded images are remarkably lifelike in texture and detail, while shooting is fast and hassle-free with all the NX5R’s key functions right at your fingertips. Direct Menu options display on-screen, so shooting parameters can be changed quickly and conveniently without taking your eyes off the action.

Extending the NXCAM line of solid-state camcorders, Sony's HXR-NX5R offers improved network functionality over previous cameras in the line, and it allows you to select from XAVC-S 50 Mb/s to AVCHD/DV recording. Suitable for documentaries, corporate, weddings, events, nature, sports, and journalism, the NX5R shoots at NTSC broadcast frame rates from 59.94 to 23.98. The built-in Wi-Fi and FTP wireless connections enable you to send footage to your editor from the camera while on location, instead of having to send the media cards to the editor. The legacy codec support allows you to shoot and subsequently edit your footage into older projects shot on AVCHD or even DV formats. However, just because the NX5R supports older codecs doesn't make it any less capable. It incorporates a 3G-SDI output that supports Full HD 1920 x 1080p video at 59.94 fps, as well as 1080i, 720p, and the previously mentioned 720 x 480i.

Built-In LED LightMounted above the lens and just below the built-in mic, the LED light features a roughly 90° beam angle, outputting a color temperature of about 5500K. It has an integrated dimmer and includes a snap-on diffuser to soften the output.Wi-Fi and FTPBuilt-in Wi-Fi, NFC, and FTP allow you to send your footage to your editor while you are still shooting, so post-production doesn't have to wait on the data cards being sent from the shoot.XAVC SThe NX5R can record 1920 x 1080p footage at 59.94 fps using the XAVC S codec.AVCHD FormatThe AVCHD format utilizes the MPEG-4, AVC/H.264 video codec, allowing users to record HD video footage onto random-access media, such as Memory Stick PRO Duo and SDHC memory cards. The NX5R supports AVCHD and AVCHD 2.0G Lens"G Lens", the lens featured in other successful Sony camcorders, already enjoys an excellent industry reputation. In the HXR-NX5R, this sophisticated lens is optimized to complement the camcorder's advanced image sensor and image processing technology.Built-In ND filtersThe HXR-NX5R is equipped with three built-in ND (Neutral Density) filters—1/4, 1/16, 1/64—which help vary the depth of field with iris control.Relay Record with Dual Memory SlotsAnother new feature is continuous recording between two memory card slots. The new HXR-NX5R camcorder automatically cycles between the dual memory slots. When using two 32GB memory cards, six hours of continuous HD footage can be recorded.Buy Sony HXR-NX5R NXCAM Professional Camcorder with Built-In LED Light From UBMS. 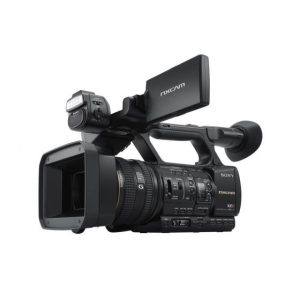