VClock is a replacement for the clocks and lights panel that was traditionally found on the wall of a radio studio. It's a software application that can be controlled by external devices (such as GPIs, serial or IP data, http posts and snmp traps).  It natively supports Axia Livewire, Wheatstone Wheatnet and Ember+ (DHD / Lawo consoles) and many more.

The basic clock can tell the time in analogue and digital formats, tell you the way to say it (in English or other languages, or you can create your own), and backtime to several junctions in the hour. It can have your station logo on the clock, and each lamp can also have an image rather than a caption. It has up to 32 lamps which are completely configurable and can be turned on / off or made to flash when external triggers (such as a "mic live" signal from a mixing console or a phone call) tell it to.

VClock also has an embedded webbrowser, which allows you to show any content that you like on VClock, simply by creating a webpage.

The intelligent scripting language allows you to change the colours/states of the lamps, clock and background at startup, and can be made to completely change all settings upon reception of a trigger.

Don't miss our other related products, AudionicsGateway, VMeters and VScroll, which are a perfect addition to VClock (and equally work very well on their own!).

VClock is available as a free download which is fully functional apart from the inability to change the caption / add an image, and use of the external interfaces (GPI, serial, IP) to control the on-screen lamps is limited to only 10 commands before the clock needs to be restarted. An "unlicenced" message appears on the face of the free version. 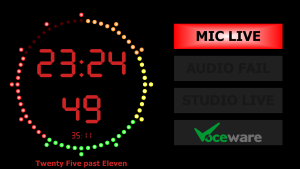