Progressive American Flat Track (AFT) is the world’s fast-growing motorsport and America’s original extreme sport, with its roots dating back to the early 1900s. At its core, professional flat track racing is a hyper-competitive, adrenaline-fueled American motorcycle sport featuring custom-built and production-based motorcycles that reach top speeds of 140mph on the straights and 90mph in the corners, all piloted by world-class athletes.

Much has changed over the years, and AFT is now experiencing a rebirth with more than 300,000 viewers per event attending races or watching from afar via telecasts or live streams. In fact, as of the time of this writing, AFT has joined forces with FOX Sports with an all-new multi-year agreement that will further expand the visibility of the world’s premier dirt track motorcycle racing series, starting with the upcoming 2022 Progressive AFT season. 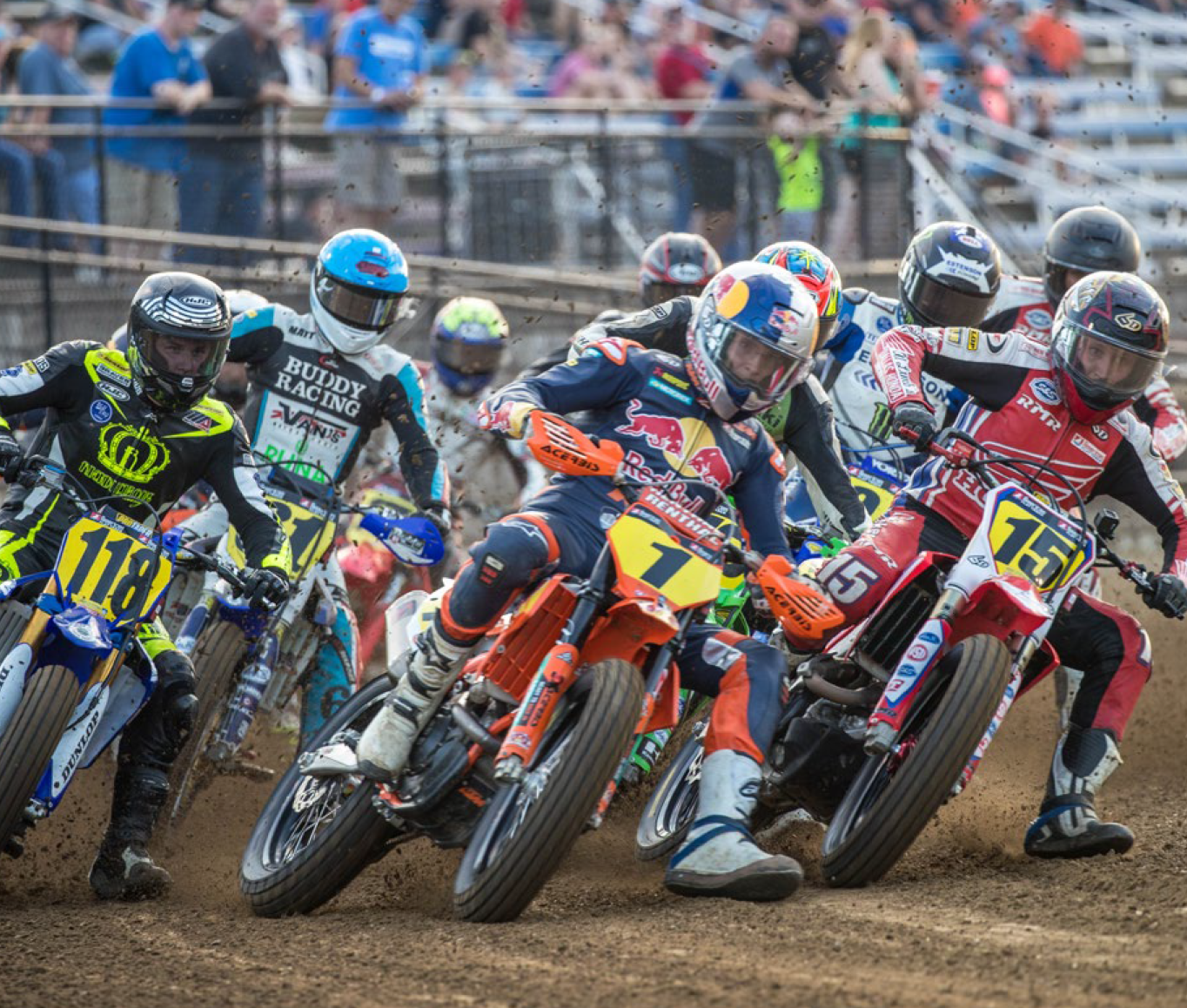 The Problem: Comms Were Difficult to Set Up, Integrate, and Troubleshoot

Reliable, simple, and efficient Live Event Comms are crucial for sophisticated live television productions. AFT’s Comms, however, were consistently hard to set up, with an overcomplicated software interface. Additionally, some device settings were only available on the hardware itself, and there were multiple areas in the signal flow to set input and output gain. This made for extremely difficult troubleshooting. Integration into any of AFT’s current equipment was also challenging. With AFT utilizing a rack full of Blackmagic Design ATEM hardware, they needed an Intercom system that could handle this sort of integration with enough play in levels to make Comms crystal clear in the control room, as well as in the field.

Zach Prescott (pictured below) has eight seasons under his belt with AFT. He started working with American Flat Track back in 2014 as a Camera Operator when the series was known as AMA Pro Flat Track. He now works full time with the company as Production Manager. He and his team started livestreaming the pro series on NASCAR’s streaming platform, Fanschoice.TV, and now covers all rounds of the American Flat Track series on NBCSN and live on NBCSN’s TrackPass from AFT’s newly acquired full-sized television production trailer.

“We went from following the action in the paddock with a single wireless security camera, to building out a Featherlight Race Hauler with a small control room in the trailer’s office. We then expanded to a 6+ camera show, utilizing wireless 5ghz radios and Teradek H.264 encoders, using only UHF radios as Comms from the director to the camera operators,” says Prescott.

In 2017, Prescott realized they had outgrown their Comms setup and purchased a digital Intercom system that they thought would be quite the upgrade, but instead were introduced to even more problems. “It was miserable because most settings in the software were not available on the actual devices; they were a nightmare to set up on our current network infrastructure; and they just did not play nice with our Blackmagic ATEM Talkback Converters.” 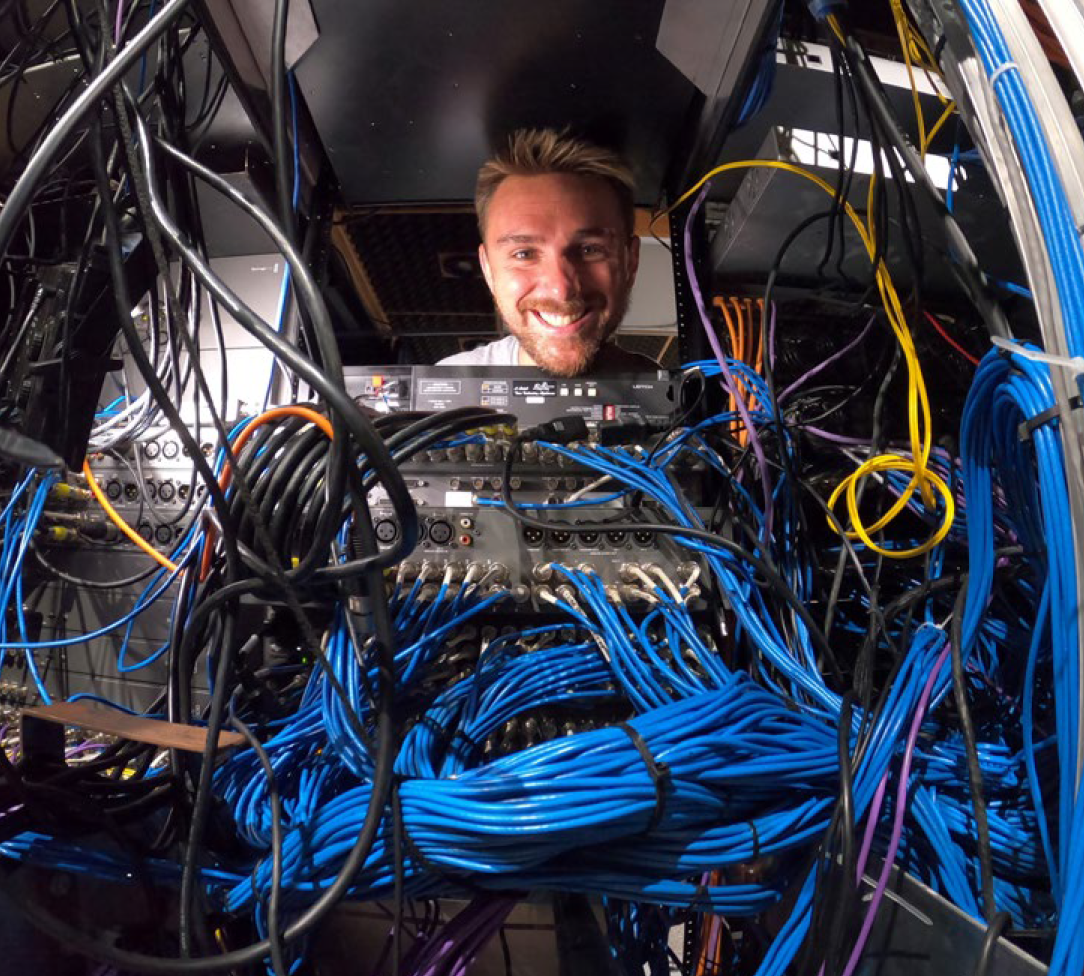 Two years later, as Prescott was on his way out of the exhibit hall at NAB NY 2019, he stumbled across the Telos Alliance booth, and was “taken away with how awesome, easy and straightforward the Telos Infinity system was, and best of all…it could actually do everything it said it was going to do!”

AFT had the opportunity to provide its production services for a one-off event—a triathlon—and used Telos Infinity in a trial run. “We set Infinity up quickly and with very minimal help. When we did need help, however, Telos Alliance’s support team was absolutely amazing. In fact, their support is one of the main reasons we will vouch for Telos, anywhere and anytime,” says Prescott.

Having had a positive experience with Infinity, now the trick was to convince management they had to get rid of the existing 2017 system, which was still relatively new, in favor of Infinity. “As soon as my boss, Gene Crouch—Chief Operating Officer and financial decision-maker at AFT—used it personally, he was immediately onboard for the purchase.”

With the green light from above, AFT purchased an Infinity system and is now using six Telos Infinity Master Panels, two Telos Infinity Beltpacks, and Telos Alliance xNodes to tie in camera Comms with analog ins and outs for two-way radio intercoms. The Announcer’s Booth, Pit Talent, and Race Control now have full communication from the field back to the production control room and can now ensure a smooth event.

“Our broadcast liaison to race control is always located in the grandstand tower, which is sometimes half a mile or more away from the control room in the production truck,” says Prescott. “We run our own fiber optic network to the tops of the grandstands, and because Infinity is IP-based, I can piggyback off the camera’s fiber network back to the SFP ports of the dedicated intercom network switch. All comms via UHF two-way radios, fiber partylines, and announcer consoles can now be tied into the Telos network.”

The Race Control Kit now has two fiber media converters in it. One being an NDI to HDMI decoder for a Multiview video feed for the Race Director, and another that is strictly for the Broadcast Liaison’s Infinity Beltpack. When he keys up his Beltpack, it goes into the xNode out and into a UHF base station transmitter so anyone in the paddock, TV control room, or on track can hear him.

AFT’s A1, Tevin Pfifer, who handles all things audio on their show, took the initiative to begin pushing the capability of Infinity’s Dashboard Software and created multiple partylines, IFB mixes, and really began to dial in the settings and features of the Infinity System.

The second round of the 2021 season was the Yamaha Atlanta Super TT at Atlanta Motor Speedway, and “one of the first “quick turnaround” live to tape events we had where we were able to save a significant amount of time in post-production thanks to the capability of Infinity’s xNode and Link Licenses, which gave us the ability to communicate with the off-premises Control Room and Announce booth,” says Prescott.

“Before, if we were producing our live streamed show on Saturday it would get sent to NASCAR Productions, where the recorded show would be VO’d and cut down to air on NBCSN the following week. Now, we can go live to tape with less than a 24-hour delay for NBCSN with confidence in the Infinity system.

In Atlanta, we used two Telos Alliance xNodes talking to each other over public internet—one in the control tower in Charlotte, where they take in feeds and procure it live, and the other in the production trailer trackside in Atlanta Motor Speedway.”

Since they first began with Telos Infinity in 2019, AFT’s needs have changed, partly due to the pandemic. During COVID, for example, Prescott was able to VPN into the production truck with the ability to control everything but the intercom. Luckily, Telos Alliance was at the ready with a new solution for that in Telos Infinity VIP Virtual Intercom Platform. AFT has plans to implement the new Telos Infinity VIP Virtual Intercom panels next year. That way the AFT team cannot only have a virtual keypanel in its competition trailers, but also if a vital team member is not able to be at track, they can still communicate with the trackside team and help from home without requiring interconnectivity on the LAN.

“In terms of the service, training, and support I have received from Telos Alliance, I have saved countless hours of troubleshooting, configuring, and setting up the Infinity system over traditional Live Event Comms,” says Prescott. “When we are in the most mission critical times of our live broadcast, the Infinity system simply works, and it is now easier than ever to make changes on the fly. Plus, I have the comfort and reliability that I am only a phone call away from some of the best technical support I have received in the industry. The time saved with this system is constantly money back in our pockets, and I could not have made a better decision than to go with the Telos Infinity IP Intercom System for our Live Event Comms.” 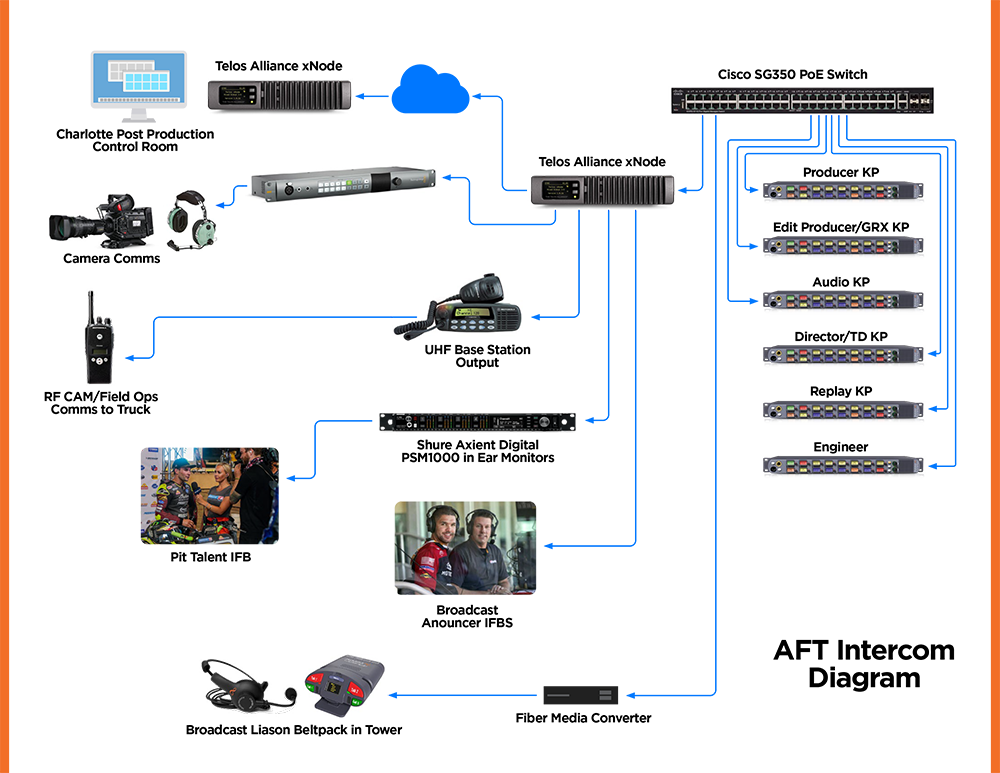 Are you ready to take your Comms to a new level of efficiency? We are ready to help with the most advanced intercom platform available, all on an IP backbone.